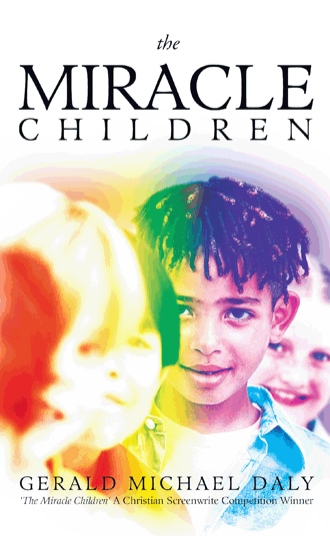 Three spheres, reflecting the beauty of precious stones, glistened in a rainbow of colors that represented God's jewels on the earth, the human seed that are His children. Elijah, Elisha, and the soldiers vanished from the hillside; the three rainbow spheres lingered, and then took off at ultra-light speed, as a ticking of clocks echoed from within them. They circled the earth, crossing paths from different angles and directions, and flashing rainbow points of light down on cities, towns and villages throughout the world. In Nairobi, Kenya, a little boy, born with only one arm with two fingers on his hand, struggled to draw water from the village well. Suddenly, a rainbow of light, unseen by the other children at the well, surrounded the boy's body causing a miraculous growth of a perfect second arm and hand. The children, terrified at what they witnessed, dropped their wooden water buckets and ran off to the village yelling for the elders. Alone at the well, the little boy cautiously touched his new arm, and then burst into laughter. In Copenhagen, Denmark, in a hospital for burns, an eight-year girl covered in scars, tried, but failed to sit up in bed to greet her family. For a fraction of a second, her scarred body is covered in a rainbow of light, and though she saw the light, her family didn't. However, the family did witness a miracle flowing over the girl's body as her mother cried out, "My God...My God..." Everyone in the room watched in amazement as the girl's face and body is covered in new, smooth skin with no visible scar tissue remaining.

December 12th, 2012, Pastor Isaiah Hillman awakens as the miraculous hand of God encircles many children in rainbows of light. The children are blessed, healed and commanded by the Holy Spirit to prepare the world for 'The New Day.' Five of the children are members of Pastor Hillman's congregation, and he soon finds himself facing opposition from his family, the news media, and evil forces that will do anything in their power to stop 'The Miracle Children' from fulfilling God's New Beginning for the world.

1 - As a screenwriter, 'The Miracle Children' screenplay won 2nd prize in the Christian Screenwrite Competition. I know the story, and since I was inspired to write it, I'm the best one to develop it. 2 - As a professional writer/producer, with a number of movies and stage production produced from my writing talent, authoring 'The Miracle Children' was a challenge I wanted to experience. I was ready and willing to develop the story and bring Glory to God, as well as take readers on a new, exciting journey. 3 - Joining the USAF, my personal journey took me out of the South Bronx to live in and/or travel to many countries around the world. I now live in Los Angeles, CA.