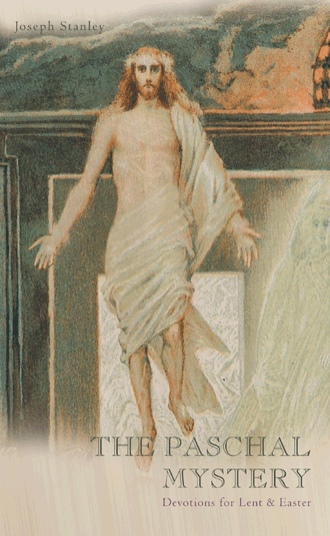 Christ has died; Christ is risen; Christ will come again – this is the basic mystery of the Christian faith. It is a single mystery. But we humans need to reflect on it, part by part. Today we reflect on the first part of the mystery: Christ has died. As we do so, we draw on the “memory” of that event, as it has been enshrined in the Scriptures. We are about to begin what we call the "Way" of the Cross or the "Stations" of the Cross. We try to see what this memory means for us. We try to let that memory speak to us. We try to let that memory transform us and bring us to conversion, so that through sharing in the suffering of Jesus, we may also be found worthy to share in the glory of his resurrection.

Lord Jesus Christ, you suffered, died and rose again for us sinful human beings. Be with us as we make this journey. In¬spire us by the spirit in which you endured your sufferings, so that we may endure our own sufferings, but always in the hope of your resurrection. Give us the grace to change what we can, and must, change. Give us the serenity to accept what cannot be changed. Give us the grace in every instance to be committed to following your path of bringing salvation both to ourselves and to the world in which we live. We ask this of you who live and reign forever and ever.

Reading Mt 26:26-30:
While they were eating, Jesus took a loaf of bread, and after blessing it, he broke it, gave it to the disciples, and said, “Take, eat; this is my body.” Then he took a cup, and after giving thanks he gave it to them, saying, “Drink from it, all of you; for this is my blood of the covenant, which is poured out for many for the forgiveness of sins. I tell you, I will never again drink of this fruit of the vine until that day when I drink it new with you in my Father’s kingdom.” When they had sung the hymn, they went out to the Mount of Olives.

The meal that sustains Christians in struggling for the kingdom.

In recalling the final journey of Jesus to his death, we begin with the Last Meal he celebrated with his disciples. Throughout his life, Jesus had fraternized with the outcasts in society. Again and again, he had told his followers that they were not to dominate over others, but to be at the service of others. Now, he celebrates a final meal with them and in that meal in the bread and wine that he shares, he points out the key dimension that should characterize his followers: Sharing a meal (even with those who would betray him, deny him and run away to save themselves) leading to the sharing of our lives with one another (and with all people). Bringing back our bodies broken in the service of our fellow humans and our blood poured out in the struggle to uphold and maintain the dignity of others who journey with us in life back to the Eucharist so that we may share in the power of the resurrection.

Let us pray:
Lord Jesus Christ, your final meal with your disciples was the climax of your life of service for us. In our journey through life, it is the painfulness of the struggle that we experience. Grant that we may find in our Eucharistic celebrations strength to keep faithfully to the task that you have confided to us. We ask this of you who live and reign forever and ever. Amen.

LITURGICAL TEXTS:
1. Lord Jesus Christ, we worship you living among us in the sacrament of your body and blood. May we offer to our Father in heaven a solemn pledge of undivided love. May we offer to our brothers and sisters a life poured out in loving service of that kingdom where you live with the Father and the Holy Spirit one God forever and ever. (Prayer, Mass of the Solemnity of Corpus Christi)

2. Lord accept the gifts of your faithful [as we recall today the memory of those Christians whose names we no longer remember, but who have died in the struggle to build up a world of greater justice and love]. The Eucharist gave them courage to offer their lives for Christ. May it keep us faithful in all our trials. We ask this through Christ our Lord. (Prayer over gifts, Mass of the memorial of Saints Cornelius and Cyprian. – adapted)

Reflections from the Fathers:

Jerome: When the typical Passover was concluded, and Jesus had partaken of the Lamb with his Apostles, he comes to the true paschal sacrament; that, as Melchisedech, Priest of the most high God, had done in foreshadowing Christ, offering bread and wine, he also should offer the present truth of His Body and Blood.

Remigius.: Fittingly also did he offer fruit of the earth, to show thereby that he came to take away the curse wherewith the earth was cursed for the sin of the first man. Also he bade be offered the produce of the earth, and the things for which men chiefly toil, that there might be no difficulty in procuring them, and that men might offer sacrifice to God of the work of their hands.

Ambrose: This bread before the sacramental words, is the bread in common use; after consecration it is made of bread Christ’s flesh. And what are the words, or whose are the phrases of consecration, save those of the Lord Jesus? For if His word had power to make those things begin to be which they were not, how much rather will it not be efficacious to cause them to remain what they are, while they are at the same time changed into something else? For if the heavenly word has been effectual in other matters, is it ineffectual in heavenly sacraments? Therefore of the bread is made the Body of Christ, and the wine is made blood by the consecration of the heavenly word.

Chrysostom: Ah! How great is the blindness of the traitor! Even partaking of the mysteries, he remained the same; and admitted to the most holy table, he changed not. And this Luke shows by saying, that after this Satan entered into him, not as despising the Lord’s body, but thenceforth laughing to scorn the traitor’s shamelessness. For indeed his sin became greater from both causes, as well in that he came to the mysteries with such a disposition, as that having approached them, he did not become better, either from fear, or from the benefit, or from the honor.

More than two billion people in the world claim some sort of relationship to Christianity. Despite the wide diversity represented in the New Testament literature and the wide diversity of practice, there is a basic gospel and proclamation that even ante-dates the written texts of the New Testament. As Paul expresses it “I handed on to you, as of first importance, what I in turn had received that Christ died for our sins. in accordance with the scriptures and that he was buried, and that he was raised on the third day in accordance with the scriptures … Whether then it was I or they, so we proclaim, and so you have come to believe.” (1 Cor 15:1-4, 11).
This book provides the basic texts (with references to parallel texts) of this basic message together with reflections and prayers. In addition, there are reflections taken from the Fathers of the Church, which provide material for reflection and new insights into the Paschal Mystery. May those who read this book, praying and meditating on its message, be empowered to return to the simplicity of the original message - the gospel received – the gospel handed over – the gospel which you received and in which you stand, as will generations of Christians to come.

The author brings to this book half a century of experience in the ministry - at various levels and in various parts of the world. In addition, he has a wide knowledge of several subjects at graduate level such as civil law, philosophy, religions, culture, catholic theology and liturgy and many languages. He hopes that this little work will foster devotion and help Christians back to renewal by returning to the very roots of the Christian message – the death and resurrection of Christ or the Paschal Mystery – a message that is prior even to the written texts of the New Testament.