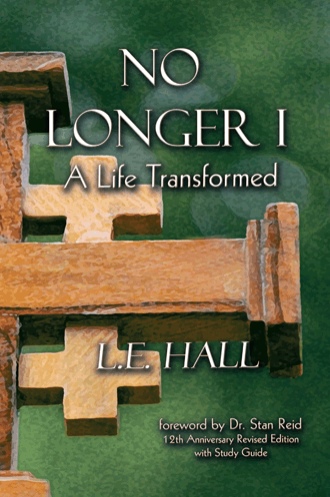 “It is no longer I who live, but Christ lives in me.” —the Apostle Paul

“For anyone who hungers and thirsts for purpose and meaning in their life, Larry Hall is an experienced sage able to guide them to the table and fountainhead.” —Dr. Stan Reid, President, Austin Graduate School of Theology (from the foreword)

“A timely, stimulating look at what being transformed into the image of Christ is all about, can be, and should be. With strong biblical and psychological analysis, Larry Hall presents startling implications for any person desiring Christ-esteem and self-denial.” —Dr. Michael O’Donnell, President, International Family Life Institute

“Arresting, penetrating analysis. Every chapter—almost every page—compels a fresh new look at what is going on within us and in the world around us. In practical, insightful language, No Longer I brings us face to face with what it means to live a Christ-committed life in the midst of today’s confused intellectual and spiritual climate.” —Dr Michael Armour, co-author, System-Sensitive Leadership

“The wonderful thing about Larry’s book: I watched him live it before he wrote it.” —Joe Baisden, Minister Emeritus, Belton Church of Christ

L. E. Hall has over forty years of experience in Christian ministry and counseling, in both clinical and church settings. He speaks and provides training around the country on a variety of topics, psychological and theological. Larry is known for his ability to present complex concepts in ways that are understandable, practical and entertaining. Along with his full-time church work as a minister of counseling and family life in Belton, TX, he is an adjunct professor at Austin Graduate School of Theology. He holds degrees from Abilene Christian University and Pepperdine University.

Very early in his career Larry saw the point-for-point parallel of Matthew 16:24 and Galatians 2:20, the former being the Master's command and the latter being the disciple's response. Together, they define the very essence of the Christian life, what Larry terms Self-denial/Christ-realization. This vision of the crucified life came to be the heart of Larry's counseling and ministry models. Twelve years ago, his book, NO LONGER I, was released, the culmination a lifetime of work inspired and defined by that vision. Now Westbow Press announces the Twelfth Anniversary edition, freshly formatted and revised.

Of the first edition, Larry said, "For over twenty years I just assumed that one day I would write this book. Its theme permeated everything else--my preaching, teaching, youth ministry, counseling ministry... Then one day while I was driving down Old Charter Oak Road, God finally got through: 'What makes you think that you, of all people, should or could be the one to write such a book?' For the first time in decades, I no longer assumed that I would some day finish this project, my dream. That dream and myself with it had to be crucified. I gave up. One year later the manuscript was complete."

Larry and Janet, his wife of 43 years, are the proud parents of David and Elizabeth. David worked in the mission fields of Haiti, the Dominican Republic and Kenya for several years. He also did briefer disaster relief work in several other countries. Now, as associate director of Sobriety House, he works with recovering addicts and alcoholics in Denver, CO. Beth and her husband Jeff Phillips are on the faculty of Wescott College, Cambridge University, England. A new addition to the Hall family is Hattie, a tiny Yorkie who rules the household at present.

Larry loves telling good jokes, writing bad poetry, torturing his piano and denying that he is a Trekkie. Five years ago, the doctor confirmed Larry's suspicion that he had Parkinson's. His friends and family were sympathetic but after weeks of a steady barrage of bad Parkinson’s jokes, now just say, “Yeah, whatever.” God has since that time extended many graces and bestowed many blessings upon him.

Should you wish to contact Larry to schedule a workshop, seminar, or just to give feedback, he can be reached at larry@beltonchurch.com