No One Has Hired Us

Bible Truths for the Unemployed

by B. Wayne Bradfield 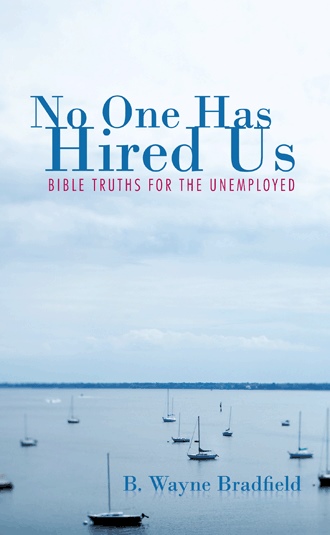 People of Jesus’ day knew how it felt to be out of work. Wage earners had to compete with slaves and bondsmen for available job opportunities. Agriculture was a main source of employment, and land owners had the option of hiring day laborers for one denarius per day, buying slaves for the equivalent of about seven years’ wages, or recruiting bondsmen who would work for room and board.
Many of the people who met Jesus were undoubtedly hoping and praying for work so they could feed their families. Others were experiencing the injustice of slavery. Oddly enough, I can find no examples in the Bible of Jesus finding jobs for the unemployed, freeing the slaves, or lobbying the governments of the day for laws that would bring about fair employment practices. In fact, on the surface, Jesus appeared to be indifferent where money matters were concerned.
A case in point would be the poor widow who gave all she had (Mark 12:42). Although Jesus spoke highly of her, there is no evidence that he rewarded her with a comfortable income for her faithfulness. Similarly, Jesus demonstrated his ability to feed thousands with only a few loaves and fishes, but there is no record that he ever established soup kitchens or food banks, as we know them today. Instead, he warned his disciples to beware of the yeast (meaning the teaching) of the Pharisees, which would address the needs of the outer man while leaving the inner man destitute (Matthew 16:5–12). Jesus never implied that adequate income and food were not important, but he made it very clear that his followers’ priority should be a right relationship with God, whereupon “all these things will be given to you as well” (Matthew 6:33).
In Matthew 6:25–34, Jesus provided a detailed picture of a loving heavenly Father who knows, not only our every need, but also the needs of all of nature. According to Jesus, if God feeds and clothes the birds of the air and the flowers of the field, how much more will he feed and clothe his children?
The first and the best reason why we should study God’s Word in relation to finding a job, then, is to learn and understand the basic principles that apply to God’s plan for meeting our needs. The Psalmist sang to God, “Your word is a lamp to my feet and a light for my path” (Psalm 119:105). I don’t know about you, but when I’m faced with problems that seem beyond my comprehension and worries that threaten to overpower me, I don’t often know which way to turn. I’ve discovered, however, that God knows my every need, and has provided his Word to light my path and direct my feet in times of trouble.
In the second chapter of his first letter to the Corinthian church, the apostle Paul wrote about God’s secret wisdom, which was hidden from the rulers of the age. This hidden wisdom came from the Spirit of God and was and is understood only by those who receive God’s Spirit. Without the discernment of the Spirit, God’s wisdom is said to appear as foolishness to the world (1 Corinthians 2:14).
This is the second reason why we need to turn to the Word of God when faced with the problem of unemployment. The Bible tells us how to receive God’s Spirit. Doing so leads us to the deeper things of God. Care must be exercised, however, that we don’t view Christianity as some mystic society holding wisdom and understanding under lock and key, lest they be misused. On the contrary, keys that will open the door to these blessings are offered freely to all who will receive God’s Spirit.

Many excellent books have been written on the subject of how to get a job, and it is not my goal to add another to the library shelves. This study seeks to examine employment and unemployment from a Biblical perspective and will hopefully make suitable companion reading for other self-help books. If the Bible is—as many people say—God’s operating manual for successful living, then surely it will be our source of needed wisdom to cope with every life situation, including joblessness.

Contrary to the opinion of some people, the Bible has great relevance in today’s world. I have discovered a virtual gold mine of guidance, instruction, and encouragement for those who would turn to God’s Word in times of unemployment. Like gold, however, the nuggets are seldom found on the surface; they must be discovered through some effort. They are found embedded in the principles governing God’s kingdom that are scattered throughout the Bible. These principles will not only teach us how we should live, but also how we can make a living.

Wayne Bradfield worked for the Canadian government in its human resources department for a span of thirty years, helping the unemployed to find work, and helping employers to locate suitable workers. While he made his living as a manager, his favorite pastime was teaching Sunday school, and leading many home Bible studies along with his wife Sherron.

While teaching evening courses on Creative Job Search Techniques for his department, Wayne began dreaming of conducting a series of Bible centered job clubs through his church. Thus began a search of the Bible for passages that could bring hope and understanding to unemployed persons. Most of the material for this study was developed over the ensuing years, but because the last half of his government tenure involved a great deal of travel, the dream for a job club never materialized.

Over the years, Wayne has shared his notes with a good number of unemployed persons, and received encouragement from many to publish them. And so, here they are.

Email the author at wayne@bwaynebradfield.com