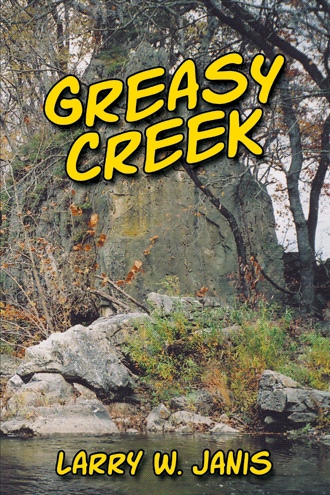 Come sit a spell on the banks of Greasy Creek. This quiet little out-of-the-way place holds a lot of memories, a few of which you'll find in the pages of this book.

Greasy Creek is about life as it was lived near this peaceful creek in the late 1940's. Join Larry W. Janis -- or "Bud" as some call him -- for an exciting trip to this special place and time.

While we travel through time and space, we hope you'll see that the future isn't controlled solely by the events of the past, or by the uncontrollable things that happen to us -- but by the people who touch our lives, and also the choices we make everyday.

"Greasy Creek" is about life as it was lived near this peaceful creek in the late 1940's. Join Larry W. Janis - or "Bud" as some call him - for an exciting trip to this special place and time.

Born in St. Louis, MO in 1937, Larry, (called Bud by his in-laws), was not to remain a city boy for long. At the age of five, after a brief ten month stay in the sunny state of California, he found himself on a dairy farm south of Farmington, MO. in St. Francois County. He was to spend most of his time on some farm until he left home at the age of 17 to begin his world travels.

However, one of those farms would be more memorable than the others. That was the year he would be in the 7th grade and live along Greasy Creek. Strangely enough this move would take him into Ste. Genevieve county as his Great ... Grandfather had done back in the 1700's when the city of Ste. Genevieve was founded and he became the proprietor of the first inn west of the Mississippi River. This was a fact of history that Larry would not be aware of until many years later as he had little interest in education prior to becoming a man.

At 17 Larry entered the military, again as his Great ... Grandfather had done when he joined with George Rogers Clark’s forces and became the flag bearer in the capture of Fort Vincennes in Indiana during the Revolutionary War, On his second tour of duty, (the Army first then the Air Force), Larry finally made a belated start on his formal education. It would culminate many years later with a masters degree in, of all things, educational administration. Along the way he would not only accumulate some 240 semester hours of formal education, but also many informal programs such as: carpentry, heavy equipment operation, truck driving, long range radar repair, electronics, emergency medical training, pilot's license, (bush flying in Alaska), IBM office products repair, auto-body repair, and repelling instructor.

Larry, with his late wife Patsy, daughter Susan and their German Shepherd, Ginger, moved to Alaska in 1972 where he would teach a number of things, including 7th grade science. A far cry from his time spent along Greasy Creek as a boy who hated school. To make it even more of an unlikely situation he would be teaching in a small country town called Wasilla. You may have already guessed the next part of this strange situation. In 1977 one of his students was to be a young lady by the name of Sarah Heath who would become the first female governor of Alaska and later the first female to run for vice president for the Republican Party. A teacher never knows what the future holds for their students.

Alaska was to hold even more that would affect Larry’s life. Due to circumstances both within and beyond his control, (his home caught on fire), he would realize a lifelong dream of becoming a pilot. Thanks to several missionary pilots that he worked with he was able to buy a 1934 Taylorcraft. A small 65-horsepower airplane that in the right hands made a very nice bush plane. Larry’s instructor happened to have one of these planes and was an excellent pilot. Due to his background in farm work and later in the military his work with heavy equipment and trucks of various sizes he was able to pick up the ability to fly his T-cart into and out of some very small places.