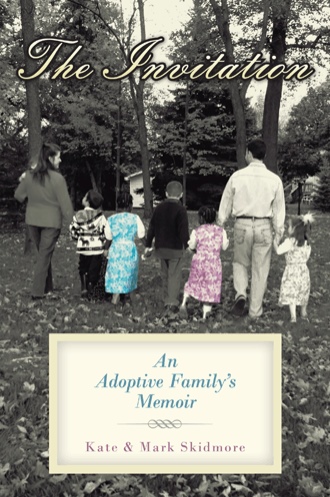 We were not pursuing adoption when we came across a picture on my sister's bulletin board. In the picture were two little girls sitting in a toy car. The picture, though cute, did not initially pull me in, but as the day wore on, there was a pressing in of one simple question. "What about you?" Six months later, we were on a plane heading for Uganda with $12,000 sewn in on the insides of our shirts!

Author Biography Kate is an educator in profession and perspective. Over the past 17 years she has served as an educator in a variety of capacities, ranging from experiential/adventure/outdoor education to higher education. She has worked with at-risk youth, families, corporate employees, teachers, and counselors, as well as secondary and postsecondary administrators. Whether in the home, the workplace, or the community, Kate’s passion is to help others access their talents, gifts, and abilities in order to more fully live out God’s purposes for their lives. The writing of The Invitation is a natural extension of this calling. Kate earned a bachelor’s degree in recreation, leadership, and management from Ferris State University and a master’s in counseling from Northern Illinois University. Kate lives in East Lansing, Michigan, with her husband, Mark, and their six children, Jack, A.J., Rhoda, Maria, Megan, and Luke. When not tending the home fires, you can find Kate being active and enjoying the outdoor world. Mark is currently a professor of economics at Michigan State University. He has published numerous articles on topics such as the economics of natural disasters, development, and public finance policy. His work has been cited in media outlets such as the Boston Globe, Europe Intelligence Wire, Forbes, International Herald Tribune, Los Angeles Business Journal, PBS News Hour, Times of India, and the Washington Post, among others. Mark earned a bachelor’s degree in economics from the University of Washington and master’s and doctorate degrees in economics from the University of Colorado. When not working, you might find Mark at home playing with his six children—basketball, bicycling, baseball, and the “big wrestle” are some popular activities.