by Dorene A Lang 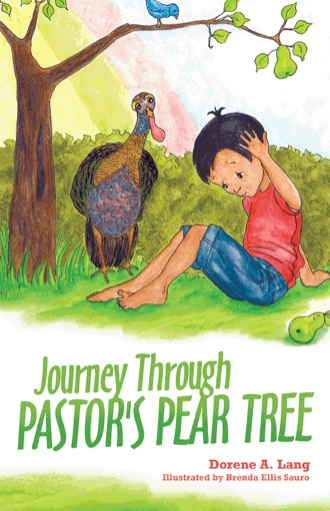 The morning seemed to smile at them, and Charlie felt better. “Three days after he died, Jesus rose from the dead. He’s in heaven waitin’ for us.” Cobb was still very loud. Charlie looked out of the corner of his eye at the little frog on his shoulder. J. D. Cobb was puffing his neck and chest out so that it appeared like he was a balloon ready to fly away. Charlie took a mighty breath and blew it right at the frog. Cobb was so startled by this that at once he was silent. Then Charlie said in a quiet voice, “Please stop yelling in my ear.” Cobb hopped down. Cobb grinned, or at least that’s what it looked like to Charlie. “Charlie, if ya look over there by that there stream, I think you’ll find a nice bite to eat. It’ll make you feel better.” Charlie took a shaky step off the road and saw a brown paper sack lying on the ground by the stream. His belly rumbled loudly. He walked over to the water. He dropped to his knees and reached his cupped hands into the water for a huge gulp. Then he reached over, grabbed the bag, and opened it to find a sandwich. He didn’t bother to make sure Cobb had food. He didn’t do anything except reach into the bag, pull the sandwich out, and take a huge bite. Cobb’s look told Charlie he hadn’t done something he was supposed to. “Don’t worry, Charlie, I’ll say grace for the both of us. ‘Dear Lord in heaven, thank ya for taking care of our needs. Bless this food so that it blesses us. In Jesus’s name, amen!’” Almost before the words were out of Cobb’s mouth, he flicked his tongue out and snatched a fly out of the air in front of him. He pulled it into his mouth with a crunch. Charlie gagged before finally swallowing the bite that had stuck in his throat. He then managed to spit out some words, “What page is next?”

Young Charlie is very anxious to see some turkeys while visiting Pastor. However, he doesn’t expect talking turkeys! He is drawn near by their babble, and swept away by a tree. He is sent to a place where Charlie discovers beauty, and a story that will change him forever. Through a wonderfully colorful book, Charlie soon learns about Jesus and the sacrifice he made for sinners. The story is told with colors for children to remember the details and to share them later. .

Dorene Lang is a Maine author who holds a degree in Social Services. Most of her working career has been spent with youth, with and without disabilities. Lang's "Journey" began when she, her husband Charles, and sons Charlie and Jacob lived with their pastor during a personal hardship. One of the highlights of living there for Dorene was the pear tree that was within view of the living room window, and the turkeys which sometimes surrounded it. Dorene credits her Lord, Jesus Christ for any success in her life.