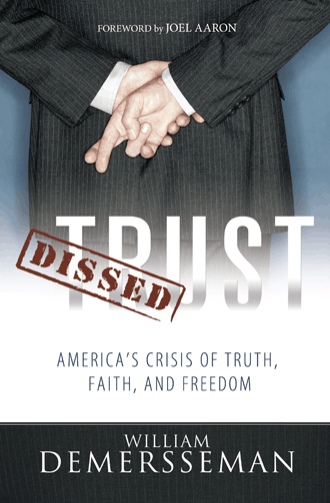 Dissed Trust From Chapter 1: Opposite World

Saying What You Don’t Mean
My family recently played an impromptu word game at the family dinner table that quickly had us all laughing so hard we almost choked on our food. The game was called Opposite World. In the game of Opposite World, there is only one rule: Say the opposite of what you really mean. I’ll try to recreate a bit of the flavor of it:
Me: “Please don’t pass the potatoes.”
Son, age nine: “Not okay. Here you aren’t!”
Me (upon receiving the potatoes): “You’re welcome.”
Son, to me: “You’re not welcome, Mom!”
Me, to son: “Thank you, daughter.”
Daughter, age seven: “You are all crazy! I mean not crazy! … Whatever!”
We had to choose our words carefully at first, but I was surprised, and mildly alarmed, at how quickly my brain adjusted. It would not take much practice before I could convincingly communicate a message expressing the opposite of my true beliefs and intentions.
I expect that is one reason God endowed humans with a conscience. Of course, the conscience must be constantly exercised, developed, and purified; otherwise, it is vulnerable to the corrosive effects of rationalization. Our human capacity to self-justify and deceive ourselves and others is limitless.
Opposite World was a great dinner table game, but it was exhausting. Everything spoken had to be translated using the “opposite world” code. After a few minutes, we all were ready to return to “normal world.”
Where did it go?

Politicians have long had a well-earned reputation for twisting facts and bending the truth. Italian political philosopher Niccolò Machiavelli so epitomized the elevation of political expediency over morality that his name literally defines the practice. Machiavelli wrote a short but influential treatise on government, The Prince, which lays out a strategy for gaining and maintaining political power. For Machiavelli, as for Saul Alinsky, the father of modern community organizing, the essential benchmark for success in politics is winning. Machiavelli considered ethics and morality ultimately relevant only to the extent they benefitted a politician. Cunning, scheming, and conniving, the successful politician, according to Machiavelli, is a master calculator who skillfully does or says whatever is most self-advantageous. We live in a Machiavellian age. Anyone familiar with the political culture in Washington D.C. might think the vast majority of elected officials today keep a copy of The Prince on their nightstands.
For example, in answering the question “should a prince be true to his word,” Machiavelli writes, “it’s good to be true to your word, but you should lie whenever it advances your power or security – not only that, it’s necessary.”
Most Americans over age thirty remember when Bill Clinton famously pointed his finger at the camera and emphatically told America, “I did not have sexual relations with that woman.” When “that woman” produced incontrovertible proof of the sexual nature of the relationship, America learned that their president had lied. Bill Clinton’s legacy will always include his 1998 videotaped grand jury testimony, in which the president parsed the word “is” in what was surely the most existentially contrived rationalization in modern political history. In order to avoid a perjury charge, Bill Clinton struck a deal at the end of his term in office, acknowledging that in giving his deposition in the Paula Jones case, “I tried to walk a fine line between acting lawfully and testifying falsely, but I now recognize that I did not fully accomplish that goal.” As part of the deal, he was barred from practicing law in Arkansas for five years. “Slick Willie” earned his nickname.
Politicians routinely attempt to walk that fine line; more and more Americans are ready to make them walk the plank instead. Voters are starving for principled leaders who say what they mean and mean what they say. The ascension of spin to an acceptable, even admirable, practice in politics creates a dangerous climate. Healthy debate is an essential component of a thriving democracy, and people who filter facts and ideas through differing worldviews sustain a healthy political environment with an informed electorate.
The informed exchange of ideas was critical to America’s founding. After drafting and proposing the Constitution in September 1787 an intense debate on ratification ensued. James Madison, John Jay, and Alexander Hamilton laid out the arguments in favor of ratification in 85 Federalist Papers. Various anti-federalist authors, usually using pseudonyms, wrote articles opposing the proposed Constitution.

Brand Loyalty
Present day political debate is more like life in Shakespeare’s Macbeth: “full of sound and fury, signifying nothing.” Instead of facts, politicians now rely on positioning to curry favor with the electorate. Political campaigns in recent years have borrowed aggressively from the marketing world’s expertise in product positioning. Just as a brand manager attempts to carve out a unique image in customers’ minds for a particular brand or product, a campaign team chooses a specific image to cultivate its candidate in voters’ minds.
The Obama campaign strategy has already become a marketing classroom case study on how to effectively establish a brand. The Obama brand could be reduced to one short word: change. The change brand resonated with a populace worried about the economy and tired of the war in Iraq. In the Democratic primary, Hillary Clinton’s “experience” brand was no match for Obama’s change. In the general election, Obama relentlessly pushed his brand deep into the minds of the voters while John McCain settled late in the election cycle on his “country first” brand.
Obama’s effective branding campaign resulted in a decisive victory on Election Day. Every candidate seeks to present himself as an agent of change, but Obama owned the category in the voters’ minds. In today’s age of information overload, the simplicity of Obama’s campaign was its genius.

Distrust of government is a natural response to a controlling and out-of-control bureaucracy. The motivation for protest and reform is not animosity towards government and its legitimate functions, but a love of America and a passionate desire to pass on to the next generation the innumerable blessings of liberty. Citizens are frightened by the government’s relentless growth, unsustainable debt trajectory, culture of corruption, and encroachment of individual rights....

Critics of the tea party movement attempt to derail it with meritless claims of racism, extremism, bigotry, conspiracy, class-warfare and malice. The claims are ridiculous. Tea party participants include members of every party, social class, ethnicity, age and gender; they hold varying views on a number of issues, but share a deep appreciation for the limited, constitutional government established by America’s founders. They see Washington’s profligate spending, imperious unaccountability, and reprobate political environment as symptoms of a federal government that recognizes no limitations on its power. They feel a civic responsibility to speak out and to work toward a return to constitutional governance and sound fiscal policy.

This is not a book about the tea party movement. It is a book about the political, economic and cultural upheavals fueling the movement: the insanely escalating national debt; the increasingly coercive and contemptuous political establishment; the arrogant failure of true political leadership; and the pervasive assault on the society-sustaining virtues of truth, trust, integrity, morality, freedom, and civility….

William DeMersseman is a former practicing attorney with fifteen years' experience as an ordained United Methodist pastor. He is an honors graduate of both the University of Georgia School of Business and the University of Georgia School of Law. DeMersseman, who holds a Master of Divinity from Asbury Tehological Seminary, has written for Bristol Books, Holiness Digest, and the Valdosta Daily Times. He lives in Georgia with his wife and two children.