Pretty Smart For A Girl

by Jewell E. Myers May 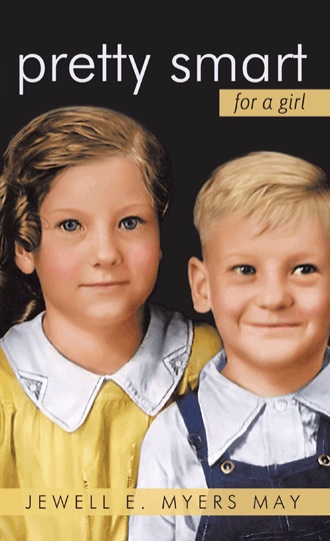 
Those are the words my brain has heard most of my life. My brain has been trained to not expand and think of thought-provoking things. Being born a girl and into a family that was accustomed to keeping the female members in a subservient stance it was difficult to determine if an intelligence was there.
When I was very young I overheard my father tell a neighbor, "She is pretty smart for a girl." I remember thinking "What does being a girl have to do with it?" The slight was remembered and my girl's brain had no difficulty recalling it time and time again through the ensuing years.

After all these years I have a warm feeling toward Ma Myers even though I have never thought about the one time I was with her, just she and I.
That night she popped some corn over the grate using a popper made of screen wire. She let me look at things on her dresser and she had a small flat tin of pink clover leaf salve. She let me open it and smell it. I can still smell the soft fragrance of the salve and feel the smooth velvety texture on my hands. The box was white and had pictures of pink clover on the top. I would love to be able to find one of those boxes again.
My Grandmother Moore would work in the garden in the heat of the day and always wore a huge sun bonnet, which she had made, and when she came inside her face would be very red. She had beautiful fair skin and the sun never touched it. She never wore any make up as she thought it was blasphemy. When my Grandmother passed away at age 92 the funeral director said she had the most beautiful complexion he had ever seen on an older woman.
They had been in Phoenix six weeks when their beautiful 21 year old daughter, Eutha Mae, died of pneumonia. She had been engaged to a young man in Kentucky and left him behind, and went with her family. I felt that she had died of a broken heart so I wrote to the Bureau of Vital Statsics in Arizona for a copy of her death certificate and the cause of death was confirmed.

When the time came for me to be born Mom went to Rosiclare, Illinois, to my Grandparent's home. They lived closer to town and the doctor. The birth was long and hard. Mom never forgot it and didn't let me forget it either. She would repeat the story of my birth often and I would always cringe and didn't know what to say. She would tell how she beat her legs and the doctor bathed her face and brow with a cold cloth. She said if I hadn't been a very small baby we both would have died. I was breached. She carried me on a pillow due to my small size. All I can say now is that "I am sorry, sorry."


One time Dennis kept acting up and Mom had to correct him several times. Finally she sat him down in a chair and said, "You had better toe the mark." Dennis sat there for a few minutes and then said, "I am toeing it." Mom said, "What?" "I am toeing the mark." Dennis replied. There he sat with both big toes pointed at a black pattern in the linoleum covering on the floor.
One summer there was a huge yellow jackets nest in one of our peach trees. Dennis was fascinated by the nest and started throwing rocks at it. Mom told him not to throw rocks at the nest because he was going to get stung. So then he climbed up into the tree with a broom handle and proceed to poke at the nest. The yellow hackets came swarming out and stung him in many paces. Mom put soda plasters on the stings. Needless to say he stayed clear of the nest after that.

One summer the owner of the farm that we were share cropping came by to visit us. She was older than Mom but had a small boy. As usual my dress was stiff in front and Mom was extremely embarrassed and kept apolgizing to Mrs. Krauzee about my untidy appearance.
A short time after that a box of clothes came for me. There were several little dresses that were smocked, embroidered, and tucked with white colars and cuffs.
Mom was so excited about the beautiful clothes that the first chance she got she dressed me up in one of the dresses and rolled my hair on rags and caught a ride to town with Uncle Guthrie and had our pictures made. Dennis was about three years old and it was the first picture we had of him. Dennis and I had to ride in the rumble seat of the car and we got caught in a rain and got wet. We had the pictue made any way.

• Jewell E. Myers May is a 81 year old retiree and “Pretty Smart For A Girl” is her first published book.
• Some of her personal essays have been published in magazines, her hometown newspaper and church bulletins.
• Jewell decided she wanted to be a writer when her high school English teacher read one of her essays about the movie “My Friend Flicka” before the class.
• In addition to writing Jewell enjoys painting outdoor scenes, reading, sewing, singing and writing letters.
• Jewell resides with two of her six children in Hermitage, Tennessee, with a calico cat named “Sunny” and a mix breed dog named “Maggie”

Jewell E. Myers May is a 81 year old retiree and “Pretty Smart For A Girl” is her first published book. Some of her personal essays have been published in magazines, her hometown newspaper and church bulletins. Jewell decided she wanted to be a writer when her high school English teacher read one of her essays about the movie “My Friend Flicka” before the class. In addition to writing Jewell enjoys painting outdoor scenes, reading, sewing, singing and writing letters. Jewell resides with two of her six children in Hermitage, Tennessee, with a calico cat named “Sunny” and a mix breed dog named “Maggie”