One Man's War Against Police Corruption 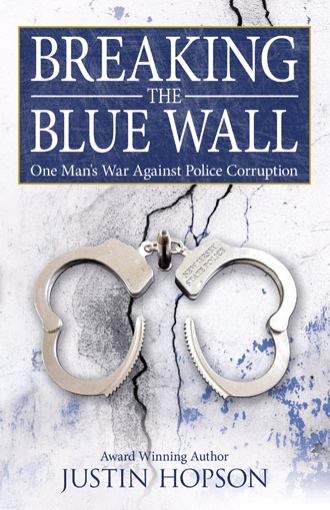 Chapter One: "Fateful Night on a Moonlit Road"

Night came again, and with it the fear.

Evening had once been a peaceful time for me, a few hours to wind down after a healthy day’s work. Now my life was considerably different. The quiet was unsettling, the little noises even worse. The brief glint of a headlight off the window glass quickened my pulse. The rustling of a twig or a tree could be nothing at all, or something for worry.

I spent my time listening and waiting these days. But for whom or what?

Somebody had told me, “Just because you’re paranoid doesn’t mean they’re not out to get you.” I think it was meant as a joke.

Who could really say whether this was paranoia? The assaults I had suffered were real enough. So were the verbal threats, the anonymous notes, and those guys with their eyes fixed on me, whispering behind my back. At night my fears intensified, watching a police cruiser shine its spotlight on my home and minutes later answering my telephone only to hear the heavy breathing of an unknown caller. It was all intended to provoke exactly what I was feeling right now; all intended to bully me into backing down.

How far was I willing to go? How much of this before I fell into line and behaved myself, or alternatively surrendered and found some other line of work?

Something had to give. That was pretty clear, I thought, glancing down at the gun in my hand. Had I really taken to arming myself around my own home? This was no way to live. It seemed to me that I was the last guy who would have been voted “Most Likely to Take On the Establishment”; for that matter, the last guy you’d expect to be put on meds for depression—particularly in my twenties, the prime of life.

I had wanted nothing more than to quietly do my job, to protect and to serve the public.

I thought about the crowd with whom I grew up, the old friends. They were out there somewhere, taking life the way you’re supposed to do at our age. They had parties, they went boating or skiing or camping, they married and had kids. As for me, I couldn’t even keep a girlfriend. My ongoing tension and mood swings had scared the last of them away.

So there it was, me against the world. Not that I didn’t have support in some sense—there were channels and authorities that had my back, at least up to a point. I was working through the system, and my charges were being taken seriously. But at the end of the day, or at the beginning of the night, those channels and authorities went home. They weren’t here to help me listen for footsteps or watch for headlights.

I thought about that, clinched my teeth one more time, and recalled the unlikely chain of events that brought me to this crossroad.

I had pursued my dream. Being a New Jersey State Trooper was the destiny I had elected for myself from grade school onward. This was what I wanted to do with my life.

My dad, a retired federal law enforcement agent, gave me a taste of the career he found satisfying. He engraved into my soul the concepts of integrity, of maintaining the common good—in the simplest terms, of doing what is right. Sure, those are basic American values, the stuff we all learn at home, at school, and at church. But my dad was out there seeing that it was done, stepping up to be responsible for a better community and world.

I wanted more than anything to follow in his footsteps. I hurried through my teenage years with an imagination enfl amed by TV cop shows, crime movies, and daily episodes from the life of my father who had a propensity for storytelling.

I did slow down long enough for a college education and even grad school. Maybe that made me a little diff erent from other guys in my field. However, one could say that, all those studies worked towards an end goal of getting a career in law enforcement and doing everything I could with the opportunity.

When my education was complete, I found myself in my midtwenties with a choice between the California Highway Patrol and the New Jersey State Police. West Coast or East Coast, Golden State or Garden State? My head said, “Go west, young man,” but my heart told me to stay home, where I could remain rooted with my family and friends.

In September of 2001—a big week in my life and, in tragic ways, that of our nation—I entered the police academy to train for the New Jersey State Police. The lieutenant in the recruiting office was friendly and encouraging. He also warned me that I’d better be ready for a twenty-three week, boot camp experience. It would be like enlisting in a branch of military service. I had an idea of what lay ahead, and I took it seriously, running, boxing, and weightlifting the days away until my time came.

There was a reading requirement, too: a book on police ethics and the value system of American law enforcement. The book made plenty of sense to me. If anything, those things went without saying; law enforcement was all about doing the right thing. I was ready for a lifelong commitment as a public servant, prepared for the responsibility of protecting citizens and enforcing the law regardless of race, sex, or creed.

As I’d been brought up, that’s how we do things in America. Even with all my measures, there was no way to be thoroughly prepared for the challenges of police training at the academy. It was a rigorous camp drawn from military traditions, where the soft civilian is broken down and recreated as a fi nely-honed, disciplined soldier ready to follow orders. That was fine with me. I wanted to be the best, and I was grateful that our state demanded high standards for its officers. Frankly, I was excited about measuring myself against my fellow recruits.

The New Jersey State Police Academy is located in Sea Girt, a little borough near the southeast corner of the state. For nearly six months, we checked in at six in the morning Monday and checked out on Friday at six in the evening. Each day began with military drill and the raising of the colors. We ran on the New Jersey beaches at mid-winter while drill instructors barked away, working up to five miles at an eight-minute pace. We pummeled each other to the floor in self-defense classes and in the boxing ring, where I learned to hold my own against fellow recruits. We marched until we wore out the soles of our boots on the cold cement, just as if we were preparing to invade Delaware. There were sixty hours of firearms instructions, with fi ring range testing, and twenty-one hours of defensive driving instruction. It was a career’s worth of training packed into a few months.

My academic background had prepared me for the classroom portion. Again, the great thrust of it went without saying, in my opinion: the profound responsibility of enforcing the law courteously and constitutionally. The core values of the New Jersey State Police are honor, duty, and fidelity.

Then there were the rigid requirements in the little things: folding clothing, mopping floors, cleaning toilets, shining shoes, proper haircut and appearance. I could see the value of military training, and why young men and women emerged with a discipline that guided them through the rest of their lives. Even if I wasn’t heading for a career in law enforcement, I would have been a better man for any life pursuit, having experienced this half-year of being sculpted into a soldier.

Best of all, I was going to get to the end of it. I was going to escape the barking drill instructors, the water skills testing, the running, the marching, the fighting, and the studying—and begin my life work.

During his first few days as a rookie New Jersey State Trooper, Justin Hopson witnessed an unlawful arrest and false report made by his training officer. When he refused to testify in support the illegal arrest, his life veered into a dangerous journey of hazing and harassment. He uncovered evidence of a secret society within the State Police known as the "Lords of Discipline," whose mission it was to keep fellow troopers in line. The Lords bullied and harassed colleagues for decades. Trooper Hopson blew the whistle on the Lords of Discipline, which sparked the largest internal investigation in State Police history.

This book is a story of fear, courage, and integrity, showing how Justin Hopson persisted with his mission of exposing police corruption. Through many unexpected twists of fate, Hopson tells his story with a strong message that one committed individual can make a successful stand against social forces of fear and intimidation.

ABC News, The New York Times, The Philadelphia Inquirer, The Star-Ledger, and other media outlets have interviewed Mr. Hopson about police corruption.

Justin Hopson served as a New Jersey State Trooper before retiring in 2007.

As a trooper, Justin Hopson investigated fatal accidents, domestic violence incidents, sexual assaults, child abuse, missing persons, homicides, suicides, narcotics, and drunk driving cases. Most notably, he spearheaded the 1979 cold case investigation of Karen Zendrosky, a missing teenager who was allegedly murdered and never found. Mr. Hopson coordinated federal, state, and municipal agencies such as the National Center for Missing and Exploited Children and NecroSearch International to assist by searching for the victim's remains. As a result of moving the aforementioned case forward, he received multiple commendations and was later selected to the State Governmental Security Bureau.

While working in the State Governmental Security Bureau, Justin Hopson provided security for New Jersey's Governor, state property, and state employees within the State Capitol Complex. He was responsible for supervising, evaluating, and training the state's proprietary guard force. He provided protective services to state agencies such as the Department of Health and Agriculture, Department of Labor, and the Department of Education. Mr. Hopson was selected and trained as the NCIC Terminal Agency Coordinator (TAC) for the State Governmental Security Bureau.

As coordinator, Justin Hopson supervised and monitored state troopers' criminal history checks and NCIC 2000 inquiries. He was responsible for tracking sex offenders, missing persons, stolen guns, and wanted persons. He is technically sound in both the Amber Alert program and the LiveScan fingerprint system.

Justin Hopson holds a Master of Arts degree in management and has a high degree of professional training. Training such as gang awareness, management evaluation, and critical first response has honed his proficiency. Mr. Hopson has been certified as a State Police Instructor and American Heart Association Healthcare Provider.

As a New Jersey State Trooper, Justin Hopson diligently exposed government and police corruption. His efforts to reform government have been supported by the likes of Senator John Adler, Dr. Susan Lipkins, Frank Serpico, and the National Whistleblower Center. ABC News, The New York Times, The Philadelphia Inquirer, The Star-Ledger, and other media outlets have interviewed Mr. Hopson about police reform. Justin Hopson has successfully testified in federal, state, and municipal court proceedings.

After retiring Mr. Hopson founded Hopson Investigations, a state licensed private investigative firm based in Charleston, SC. In 2009, Justin Hopson was appointed to the Charleston County Alcohol and Drug Abuse Advisory Board. In 2010, he became a member of the South Carolina Association of Legal Investigators. These days, Justin enjoys the slow pace, sweet tea, and steepled skyline of his favorite city ~ Charleston, South Carolina.