A Special Mother is Born 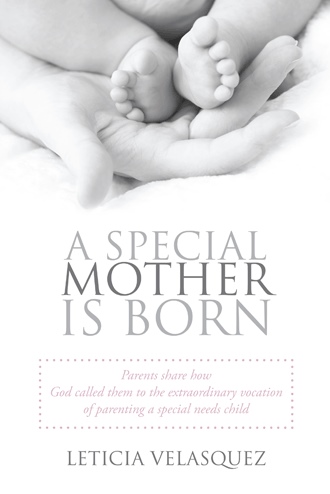 This book is a must-read not only for parents of special needs children, but for anyone who knows and loves a child who faces unique challenges in life.
Lisa M. Hendey, Author of The Handbook for Catholic Moms

Filled with moments of faith and frustration, turmoil and transcendence, these Moms and Dads, and their kids will awaken your heart to the kaleidoscope of life's real joys, and the healing power of love.
Pat Gohn, writer, catechist, and host of the Among Women podcast.

“If someone you love (perhaps you?) is hurting over the severe physical impairments of a child, hand them these testimonies to the power of Christ's terrible, tender love. At a time when so many of these little persons are in the cross hairs of a culture of death, Velasquez has fought back with grace and elan.”
Patrick Coffin, author and host of Catholic Answers Live

“Your daughter has symptoms that are consistent with Down syndrome.” The nurses were surrounding author Leticia Velasquez in the delivery room when they uttered these fateful words—words that hit her stomach like a sucker punch. She was frightened and overwhelmed, but she was not alone. Four months earlier, God spoke to her in the depths of her heart; He told her that Christina had Down syndrome and that she was a gift from His hand.

If you are faced with a prenatal diagnosis or are raising a child with special needs, this book is for you. Thirty three parents who have walked in your shoes share how they encountered Christ alongside them in the darkness. You are not alone.

Leticia Velasquez is a writer whose work was published in USA Today, Reuters, Chicago Sun-Times, and National Catholic Register.

She is the co-founder of KIDS—Keep Infants with Down Syndrome, which advocates for the dignity of unborn children with Down syndrome in the media. She has been a guest on both NPR and EWTN.