Marriage In The Red

Transforming Your Marriage One Color at a Time 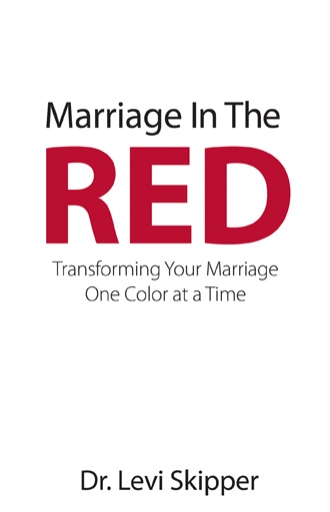 He just sat there with a blank stare on his face melting into his chair. His demeanor could only be described as, well, desensitized. Although he had morphed into the chair beside his wife, clearly he was thousands of miles away. She was boiling! Her legs were crossed in lady-like fashion with her body turned just slightly showing her back to him. She was noticeably put out. Her left foot gave indication she had drunk too much coffee, or perhaps her patience was wearing vitally thin. Without a word, their body language told the story: this marriage was in the red.

Keenly aware this meeting would take up the better half of his afternoon, he settled in his chair with a cup of coffee. As he grabbed a pen and a yellow legal pad, he offered a silent prayer to the Lord, “Father, I think this marriage needs help. Give me wisdom and guidance to help them.” He leaned back in his chair and asked them a leading question.

She rolled her eyes slowly toward the dead wood which sat on her left. Taking a deep, audible breath of disgust, she broke the thick silence. “Well, Pastor Schaeffer, I’ll just be upfront with you. Owen has no desire to be here. In fact, if it weren’t for me this marriage would have ended four weeks ago. He should be glad we have children, or he would have been served divorce papers so fast his head would spin!”

Pastor Schaeffer repositioned himself in his seat after hearing the dreaded word “divorce”. Just that morning he had read in his personal devotion Paul’s letter to the church at Ephesus. Even as she spoke, the Scripture, like a marquis flashing in his mind, went whizzing by:

Husbands love your own wives, just as Christ also loved the church and gave himself up for her, so that He might sanctify her, having cleansed her by the washing of the water with the Word.--Ephesians 5:25-26

He refocused his attention back on Norah as she continued to vent.

Her voice seemed to grow louder with every syllable. She was firing words at her husband which seemed to bounce off the invisible wall which had been erected between them. Pastor Schaeffer held his hand up just a couple of inches above his desk so as to calm her down. His phone buzzed which gave temporary relief from what he knew was about to happen.

“Pastor, you have a call on line one.”

“Marlene, I am going to have to ask you to hold all my calls this afternoon. If my wife calls, you can put her through, but other than her, take a message and I’ll get back in touch with them.”

Marlene turned a bit red from embarrassment. She knew Pastor Schaeffer had Owen and Norah in his office, but she had completely forgotten. The phones that day seemed to ring without end.

“I am so sorry Pastor; it totally slipped my mind they were in the office with you. I’ll be sure to hold your calls.”

“No problem, Marlene.” With an apologetic look, he turned back toward the disgruntled couple. “Sorry about that. The office has been overwhelmingly hectic this entire week. So let’s get back to our discussion. Owen, what’s going on?”

“Norah is losing her mind.” She furrowed her brow and starred a hole of hatred right through him. “She has it in her head that I am cheating on her.”

“Are you?” Pastor Schaeffer questioned quite abruptly.

With a defensive voice he almost shouted, “No! I am not cheating on her! She is all fired up because she found a few e-mails which I have exchanged on my blackberry with a co-worker.”

“We used to have lunch together every Thursday. Now he’s too busy at work. Yet he seems to have plenty of time to e-mail back and forth to what’s-her-name.”

Turning his full attention to Norah, Owen said, “Well the last six times we went out to eat, all you did was nag me! Pastor, isn’t there a verse in the Bible somewhere that talks about a nagging wife?” He reached over and patted the Bible on the desk. Norah’s temperature went through the roof, and she turned to face Owen straight on.

“Okay, okay. Let’s settle down here for just a minute,” said Pastor Schaeffer decisively. “Let me tell you what I have picked up on so far. It really is plain to see: your marriage is in the red.” He leaned back in his chair fully confident he had issued the proper color for their marriage. Their two heads twisted toward the Pastor and simultaneously their jaws dropped.

“What are you talking about?” Owen questioned. They looked back at each other dazed, confused, and uncomfortable; agreement was a lost art in their relationship. They were both concerned about Pastor and his label of their marriage.

He chuckled a little bit and began to explain, “I see it all the time. The circumstances are slightly different, and the faces are always different, but the color is always the same: R-E-D.” He had now actually spelled it out to them.

“You got my attention. Now tell me what you’re talking about. What does it mean to be. . . red?” Norah asked.

He reached into his desk and pulled out a manila folder which had written across the top in all caps: MARRIAGE IN THE RED. After laying the folder down on his desk, he began to expound, “Your marriage can be red, yellow, green or blue. On one occasion I counseled a businessman about his marriage. He had made some colossal mistakes and was on the verge of giving up. We began our discussion one day over a cup of coffee, not about his marriage, but about his workplace. He explained to me how he was chosen to be on a team which would travel the country and do assessments of other businesses. They would rate each team they assessed using the four colors: red, yellow, green, or blue.” He took a sip of his coffee and continued, “If the team working was in the red, they were two months behind schedule. If they were in the yellow, they were one month behind. The green meant they were right on schedule. However, the coveted blue meant they were a month ahead and doing a superb job. ” He continued with great confidence, “We have seen a massive increase in productivity as a result of this assessment tool.”

Norah and Owen were paying attention, but still confused about what a color assessment chart for a business plan had to do with their marriage. But just before they would tune Pastor Schaeffer out he said, “I leaned over that day in the restaurant and with a unique God-given boldness, asked the highly intelligent and affluent business man, ‘So what color is your marriage?’ You could actually see the sting of God’s conviction fall upon him at that moment. He quietly and truthfully said to me, ‘It’s in the red, Pastor; it’s in the red.’ ”

Norah and Owen, practically on the edge of their seats, wanted to know what in the world being in the red meant. Owen finally just blurted out, “All right, Pastor. You have my attention. What does it mean to be in the red?”

What if…Your marriage could make a difference, but it doesn’t?

What if…Your marriage could fulfill you and please God, but it doesn’t?

What if…Your marriage held the potential to advance God’s Kingdom, but it doesn’t?

Marriage in the Red uses the power of an allegory to unveil a strategy for any marriage at any stage to transform into a relationship that honors God and impacts His Kingdom. There is a longing deep within for our marriages to make an eternal difference. This book will guide you through the four colors of marriage: red, yellow, green, and blue. With these colors, you will be able to access the eternal effectiveness of your marriage. You will also be given a simple strategic plan to move from one color to the next—striving for the blue.

You will discover God’s best for your marriage. You will be challenged and spiritually motivated to leave a marriage legacy for others. What do you have to lose? Join the movement: Marriage in the Red.

Dr. Levi Skipper is the founder of First Day Ministry where he serves as an evangelist, author, and developer of Pastor Training Schools internationally. He has served local churches for thirteen years as a student pastor, college pastor, and lead pastor. His training includes a Bachelor of Science Degree in Christian ministry from Shorter College in Rome Ga, a Masters of Divinity degree from New Orleans Baptist Theological Seminary, and a Doctorate of Ministry degree from Luther Rice University.