Fixing God’s Word to Match the Wisdom of Modern Man 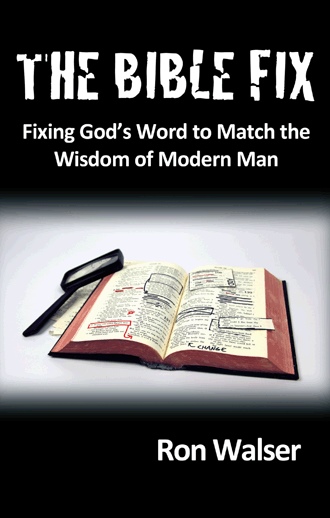 I have only known Ron Walser for three years, but during this time I have come to appreciate greatly the unique gifts that God has bestowed upon him. He came to the Lord in his forties, often considered too late and unlikely for many—especially if a person is a professed atheist and skeptic as was Ron for all those years. Since coming to the Lord Ron has diligently studied his faith, and to his delight and the appreciation of those who sit under his teaching, he has discovered that his science background in chemistry has enabled him to highlight many of the amazing evidences of supernatural design by his Creator God.

As a retired Chief Operating Officer Ron brings insight into situations by drawing parallels between the requirements for successful business and the application of biblical principles. In addition, as a member of our board of advisors for the vision of a creation museum ministry to be developed in Branson, Missouri, he has given much valuable advice and support.

Being greatly concerned with recent statistics revealing a continuing and alarming exodus of young people from the churches in which they were raised, Ron feels compelled to produce this short work to alert the Church in general to what is happening. His choice of title, The Bible Fix, is very appropriate, because he believes, as do I, that it is largely a departure from the absolute authority of the Bible in the lives of Christians that has brought about this situation. It is therefore only a return to accepting the truths of God’s Word at face value that can help remedy what has gone wrong.

The key issue dealt with by Ron is the question of the age of the earth and the universe in which we all reside. Is the earth over four billion years old or not? If it is, then the Bible is not a supernatural book of special revelation from a Creator God. But some Christians suggest that it is possible to believe in millions of years and not be in conflict with the Bible. Known as theistic evolution, this idea discounts the literal reading of Genesis and the creation account as taking place in six 24-hour days approximately 6,000 years ago. Ron challenges this idea and shows its fallacies from both scripture itself and science.

It is my belief that an open minded reader of this work will be able to clearly understand the current situation and begin to see what needs to be done in the future. I heartily recommend it and pray that with the help of the ministry of the Holy Spirit many lives will be affected for good for eternity.

For years creationists have defended the early chapters of Genesis by proclaiming, “if the foundations are destroyed, what can the righteous do?”1 The modern theologians in control of mainline churches have chided us for this stand and told us to just teach the CROSS. They claimed that such a dogmatic stance on origins causes controversy in the church and is divisive among church attendees.

Evidence for the fulfillment of Psalms 11:3 came in the form of a 2008 poll by the PEW FORUM.

The June 2008 PEW FORUM ON RELIGION AND PUBLIC LIFE poll found 57% of evangelicals, and 83% of mainline churches believe there are many ways to salvation. Like the issue of Creation many years before, now a majority of those attending church believe that the CROSS is irrelevant. Like Europe, we are becoming more and more humanistic and this generation is selling out to the cultural worldview in huge numbers.

According to this poll, we now have the “foundations” of CREATION and CROSS “destroyed” for a majority of church attendees.

The Bible Fix is for both church leaders and church members alike. In this booklet, scripture and science are explored in order to answer this question:

DO WE NEED TO FIX THE BIBLE WE HAVE OR IS IT TIME TO STAND ON THE AUTHORITY OF SCRIPTURE?

Ron Walser is the retired chief operating officer of Hansel ‘n Gretel Brands, Inc of New York, NY. He was educated and trained as a chemist and has an advanced degree in food science. He and his wife Sherri are now retired and living in Springfield, MO where they attend South Creek Church. Ron is on the advisory board for The Creation Museum of the Ozarks as well as serving as one of their associate scientist members.

Ron came to the Lord in his forties. This is an age often considered too late and unlikely for many—especially if a person is a professed atheist and skeptic as he was for all those years. Ron says, “When I found myself under conviction it seemed like an enormous pressing in on me and I would cry out to be shown so I could believe—but the inner voice would only reply, believe and I’ll show you.”

And show him He has. God’s Words on creation are referenced in 62 of the 66 books of the Bible. There is no other doctrine that has more force of scripture. The Bible Fix is a two-part booklet of apologetics. Part 1 takes you through a huge array of Bible verses where God goes out of His way to bring us the truths of creation. Part 2 is a fascinating adventure in observational science where the very creation itself cries out to all who “have ears.”