19 Residences in 19 Years of Hell and Humor 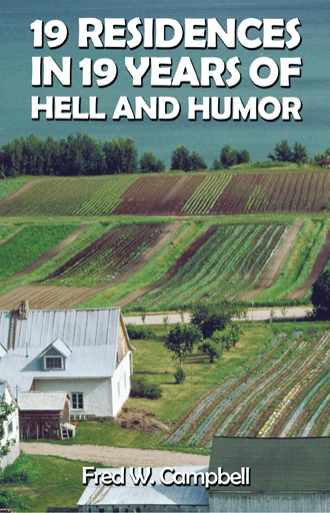 We moved again, this time back to town, because the farm was not paying off as it should be, according to my father. My dad sold everything but the house furniture and personal belongings. We had only the mules left to sell. We had eaten all the chickens up, and there were no eggs left. The chicken must be there before the egg, or there are no eggs. Work in town could not be found. My dad signed up for the army again. Dad told my mom that the allotment money would be more now since there were four boys now. Dad said another hitch in the army would be good. And when the hitch was up, maybe he could find a good-paying job when he got out. We moved into an upstairs apartment. The apartment was at the end of an overpass for the railroad. Would you believe that my adopted grandma was going to be our next-door neighbor? Grandma had lost her home too. Her husband was a drinking man, and he spent all his money on drinking whiskey and beer. Grandma’s husband finally drank himself to death. Grandma had lost everything and moved into an apartment. Bill, Grandma’s oldest son, was in the air force and put her on the allotment; he was taking care of his mom and brother. When Bill came home on leave and needed something from the store, he would call on me for the errand. I would have to tell my mom first, and off I would go on the errand. When I got back, he would give me some money. This would make me feel big and important.

These Children grew up under extreme conditions of hardships and hunger. The six sibling broke the cycle and made success out of their lives. This stop child labor and slavery in the family. All the generations from my mom and dad on back, were working the children on the farm. The only way out was leave, go and make it on you own. This pattern was passed down from generation to generation. Our generation put a stop to it without knowing it was going to happen. Why, I don't think it can be answered. In my writings, you might answer the question. This story is wrote by the second sibling in the family. This is what he remembered of the growing up and becoming a Father and husband. Enjoying the laughs and the pain with me while you read this book.

Thank you and that's from my heart, and God Bless you, because I have been blessed.

I'm getting near 71 years old now. I'm recovering from heart surgery and have a pace maker installed. I'm thanking the Lord daily for the extended life he has given me. I'm feeling great and trying to enjoy life to its fullest. I've retired from U.P.S. Truck Driving on the road and went by Cotton Top on the C.B. Radio. If the story you heard on the C.B. is not in this book, I'm sorry, maybe next time.