The Bread of the Servant

An Easter Play in Four Acts 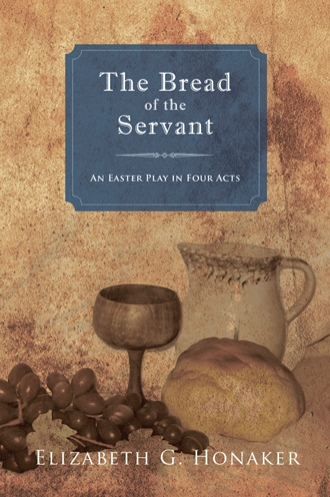 This script was written to serve a small church drama group with a big heart for witnessing. There are speaking roles for 27 actors, and several non-speaking parts, but it can be performed with fewer actors if need be. Scenery does not have to be elaborate, but two defined performance areas are needed. Stage lighting is also an important element, but it can be fixed or portable. The play centers around the Apostle John in his old age, attempting to explain to Diana, a bitter, jaded slave woman, the life-changing impact Jesus can have on an open heart. John recalls for Diana the events of the Lord's earthly ministry, explaining his own transformation from a headstrong young fisherman into a more spiritually mature man longing to serve his Beloved Master.

Always fascinated with actors and acting, Elizabeth Honaker has been writing scripts since she was in grade school. When she experienced the power of the Risen Lord in her life, she mistakenly thought her drama days were over. However, an exposure to Dorothy Sayers' monumental radio plays on the life of Christ soon changed her mind. Before she was 30, she was writing skits and short plays for her church in Eaton Ford, England, where she and her family lived and worshiped for almost a dozen years. In 1990, now back in the United States, she became the Christian Drama Director of the Wesley Grove Disciples in Hanover, Maryland. This started a period of script-writing which has produced 13 plays, of which THE BREAD OF THE SERVANT is the first to be published by Westbow Press. Elizabeth now lives with her husband of nearly 40 years, Allen, in beautiful Sparta, Tennessee. She teaches developmental writing at the college level and holds literature and writing seminars for home schoolers. She also teaches beginning and intermediate piano to all ages. She is mother to two grown children, James and Christine, and grandmother to Austin and Garrett Escobar.