A Discipleship Textbook and Tool 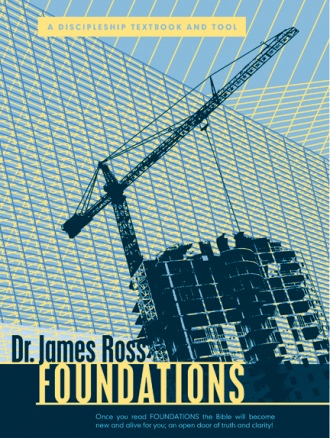 FOUNDATIONS takes an in depth approach to the design and function of ministry and discipleship. We find in the modern Church a great need for discipleship and spiritual training. Many believers, who "know to do good," struggle in their daily spiritual life as they long for an expression of overcoming faith. FOUNDATIONS leads the reader into a meaningful recognition of their place in Christ. He is our righteousness and God's grace and goodness leads every saint into a repentant and firm faith. There are two kinds of "knowledge" spoken of in the Bible, which are information and application. Information is knowledge that "puffs up" (1 Corinthians 8:1), due to the potential it has to lure people into believing that the more information they have about the Bible, the more mature they are. Hosea speaks about the second type of knowledge when he wrote: "My people are destroyed for lack of knowledge." He was expressing our need for the application of God's word that is necessary for the salvation of our souls and the impartation of Christ-likeness every Christ needs. The application of spiritual truth is the key to an overcoming faith and a renewed mind. Because of this, FOUNDATIONS offers a functional approach to Discipleship and spiritual training which develops the believer's ability to stand firm in the faith they profess. With this in mind; Solomon asked God for an “understanding heart (i.e., "a hearing heart" - 1 Kings 3:9),” because he understood that in order for anyone to be inclined toward wisdom they had to first hear God. FOUNDATIONS is designed to help the believer mature in their faith by expanding their ability to renew their mind while they develop an understanding heart, so they can learn to hear the Holy Spirit in a clarifying way. Every saint must mature in their ability to hear God as they read the Bible and listen to the Holy Spirit, and this is more readily accomplished through the discipleship process and through spiritual growth. FOUNDATIONS is an exegetical study that was compiled over twenty-eight years of pastoral and ministry experience. It is a study of the Scripture that dives deeply into the ways of God as it also expounds on many of the principles, practices, and doctrines found in the Scriptures. FOUNDATIONS is a practical tool for the serious disciple, and an aid for every Church leader.

Throughout Dr. Ross' more than twenty-eight years of ministry God has blessed him with a well rounded understanding of Christian living. Dr. Ross has been a Pastor, a Chaplain , and a Seminar instructor in both Texas and Oklahoma. His ten years as a Chaplain in the Texas prison system was an eye opener for him, as he ministered to many fallen believers, church leaders, and Pastors. Dr. Ross began his formal education in September 1982 and received his Doctorate in 2000. God called Dr. Ross to work with Pastors and Christians, developing discipleship programs that focused on spiritual growth and ministry training. Dr. Ross became a Certified Belief Therapist in 1999. Dr. Ross wrote a series of lessons titled “The Spiritual Roots of Distortions and Disorders,” which were compiled into FOUNDATIONS, and are being used in training Pastors, Church Staff, Congregations, Drug and Family Counselors, Psychologists, Psychiatrists, and volunteers in the Texas Prison system. Dr. Ross organized Dimensional Ministry in 1997 and has been working with Churches in discipleship and spiritual growth since that time. Dr. Ross states that there are two valuable truths every Pastor and Church leader should know: first, disciples are raised, not birthed, and second, you cannot disciple lost people. Dr. Ross believes that Pastors and Church leaders must return to the ministerial emphasis of developing the quality of congregational maturity, as they continue to expand the quantity of people in their local churches through evangelism. Evangelism is incomplete if the discipleship of those who are saved is left undone. Dr. Ross also believes that only effective discipleship and spiritual training, that has a firm biblical foundation, will return the Church to her first love and develop an overcoming faith. Dr. Ross retired from Pastoring in 2009, presently resides in Central Texas, is the president of Dimensional Ministry, and is an active member of his local church where he teaches discipleship and spiritual growth. During his thirty years of marriage, he has raised four children and presently has two grandsons.