There’s a Storm Coming: the Journey to Rescue and Save my Father

Helping my Father Achieve his Mental, Physical, and Spiritual Potential During His Alzheimer’s Disease 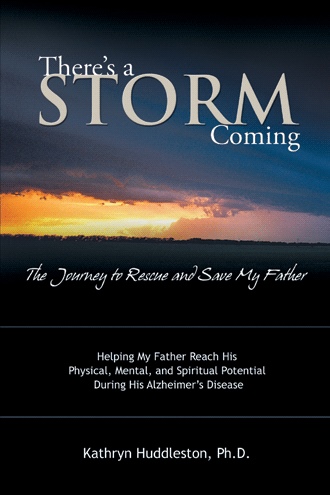 I cried by reason of mine affliction unto the Lord, and he heard me; out of the belly of hell cried I, and thou heardest my voice. —Jonah 2:2

Somehow I made it over the foggy mountain to my home that evening after I was forced to leave the cell. Racing to the phone, I immediately telephoned the facility to inquire about my father. By this time it was nearing ten o’clock, so he was bound to be getting agitated or afraid. That is, if he had not been sedated. For over an hour, there was no answer at the facility. Trying not to panic, I finally reached the person who evidently performed simultaneously as switchboard operator, nurse, and sergeant-at-arms.

Thinking that I could manage this situation if I remained calm, I mustered up my most professional, calm voice and identified myself. “This is Dr. Huddleston.” Since I wasn’t a medical doctor, I rarely ever identified myself by this title, but things were serious now. Daddy’s life was at stake, and anything I could leverage to save him, I would use. In as matter-of-factly and non-accusatory tone as possible, I continued, “I have been trying to get an answer here for over an hour.” “Yes, um, well, we have our phones on night call…,” the woman on the other end of the line stammered. I continued, “I am the daughter of one of your patients who was admitted late this afternoon. I am calling to see how he is, since he didn’t know he was coming here and he’s bound to be confused.” Perhaps she may have become a little disarmed when I mentioned I had been trying to phone for an hour; maybe she was a little intimidated by the doctor part of my name; maybe it was that no one hardly ever telephoned at that hour of the night. I didn’t care. My objective was to get frank information from this woman, and she appeared willing to give it to me.

“I am concerned about my father’s condition. Have you had a chance to interact with him?” I asked, still trying to sound polite and objective. “When I first came on duty, he was agitated and confused.” No kidding, I thought. “What was he doing?” “Well, he was sitting in the hall, repeating over and over, ‘Jenny Dillon said she was going to come right back to get me.’” At this statement, I thought I was going to pass out from what felt like a huge boulder thrown on my chest, which I couldn’t remove. But I had to continue.

Suddenly, I heard loud screams. “What is that?” I almost screamed myself, the calmness leaving my voice. “Oh, that’s the man who’s in the room with your father,” the nurse responded. “How often does this go on?” I tried to again sound calm and collected. She timidly offered, “Well, don’t tell anyone I told you, but they go on night and day. He’s in the final stages of Alzheimer’s.” “Can’t you give him something to control those screams?” I began pleading, the coolness again leaving my voice. “His family won’t let us give him anything. We go in there several times a night and try to give him something to eat to calm him. He’s reverted to an infantile state.”

I had been through a lot of pain, but this was the worst yet. I hung up the phone and dropped to my knees. In utter despair, I cried, “God where are you!” While I recognized that surely God hadn’t lost my address, I couldn’t find Him. “Why won’t You do something? Why are You letting this happen to my innocent father? You must do something! You know the need here! I’m imploring You to work this mess out.” I was almost demanding that God take this over. All those statements I had made to my Bible class about the Lord always being by your side seemed artificial. “You know that Daddy is one of your children; and You know I’ve always fought in your camp. Your promises may be real, but they don’t seem real now. I am bleeding; Daddy is bleeding. You simply must do something! You know I rarely ask anything for myself. Where are You?” I just went on and on, not being able to stop. I was so frustrated with God and almost disgusted with Him, since I knew He could change all this if He wanted to. And then, after wearing myself out, I finally relented. “I can’t depend on my own understanding in this. I am begging you to help me believe and trust that You will work this out.” I was hungering to believe in Him with every part of my being, when I really couldn’t believe in much else. I was trying hard to hang onto my belief that He was a God of love and power. But it really took an effort.

I stayed on my knees for about forty-five minutes. I had always realized that true disciples would follow Christ to the cross. It was biblical that they would experience ridicule and rejection from the world. And up until now, I had managed to deal with it. But this was too much, even for me. I simply couldn’t bear Daddy’s pain.

But as sometimes is the case when we lose all our resources, even our spiritual ones, I came face to face with the reality of God. Maybe it was my helplessness; maybe it was my intensity of will. Maybe He just couldn’t resist my honestly admitting how helpless I was. Whatever compelled it, God gave me an idea. I phoned back to the facility, against the advice of two of my closest friends who told me to “leave it alone; you’ve done all you can do.” I never believed that I had done all I could do.

Calling forth my best acting ability, I managed to ask the nurse in a nonchalant manner what the procedure was for checking family members out. I had been told months before by a social worker when I suspected a plot was underway to put Daddy away that the facilities encouraged family members to continue interaction and take them out on week-ends. This was contrary to what Mother had said, but she was accustomed to selecting information that benefited her. She had asserted that her sources told her that one shouldn’t go back to see patients if they were in a facility, that they had to get adjusted. I knew this was nonsense; as a volunteer for years in nursing homes and a life-long advocate for the elderly, I knew that one of the reasons for the fast deterioration of patients (particularly Alzheimer’s patients) in most facilities was abandonment and isolation from those familiar to them. Conversely, one of the reasons President Reagan lived with the disease as long as he did was that his beloved Nancy remained by his side.

The nurse replied, “Oh, nothing much…just sign them out. There’s usually no problem.”

I knew then what I must do. Get out of my jeans, put on a “Sunday, church suit” and get back over the mountain to that facility. I tried to sound casual. “I think I’ll come, then, and take Daddy to Cookeville to the church service we’ve been used to attending. That way he won’t feel abandoned and will be comforted to realize he’ll still be able to go to his home church. You know, just continue one of his rituals.” The night nurse told me she would get off her shift at seven, so I was determined to get there before then.

In narrative form, this book chronicles the five-year journey the author took with her father, afflicted with Alzheimer’s, to restore his dignity and help him reach his physical, mental, and spiritual potential.   It presents the many obstacles, including the presence of evil forces and other family members’ mental disorders, which had to be overcome to accomplish this. The book illustrates how the common denominator of faith in God and a belief in His supreme will enabled communication with her father, with whom she previously had only limited interaction.   She came to discover the importance of entering her father’s world, of confirming his reality, and to recognize though parts of the brain may be tangled and even gone, the response to spirit and tone actually remains. Her father’s sensory awareness and understanding increased, and she challenges some previous stereotypes held about patients with this disease. Pragmatically, the author gives the caregiver suggestions on how to ensure the patient’s sense of accomplishment and purpose and maps out daily activity processes. The book illustrates how previous experiences enabled them to survive their “storm,” as the author relentlessly struggled to keep her father from being institutionalized so he could remain a participant in this world.

“Occasionally, in a man’s life, there is a book or manuscript that comes his way that is so far out of the ‘norm’ and so deep beyond expectation that it requires thought, prayer, and time to assimilate the information through meditation. There’s a Storm Coming, Kathryn Huddleston’s book on the subject of her father’s experience with Alzheimer’s disease and her passion to help him be the very best he could be physically, mentally and spiritually, is incredible. The journey with glimpses into the family life through the eyes of a person with medical insight, and ultimately, through a spiritual lens, allows us to take a peek behind the veil of one of the most difficult and tough situations facing many Americans today. This book is an incredible read for those who care about the condition of their fellow human beings.”

“God brings hope to us in stormy times. Through these dark years, compassion and care for loved ones is always first. This could not be more true than in this book.”

“The author captures the reader’s attention by recounting in narrative form how she attempted to overcome the many challenges and trials in her ‘stormy family’ in order to lessen her father’s turbulence and bring him peace in the last phase of his life. In an unassuming, authentic way, the author illustrates how she ensured her father remained a valued participant in the world. Giving caregivers concrete ideas on how she helped her father make decisions, ensured up-close and personal interaction with others, and recognized the importance

of tone, spirit, and listening,  the book should give them a sense of hope.”

“Kathryn Huddleston believes that while in the midst of other life storms God gave her the gift to care for her father. Here she shares that journey in a very personal, detailed, and honest fashion. Not only is this a wonderful handbook for the Alzheimer’s caregiver, Kathryn’s story affirms my experience of God’s daily

walk with those who appear to be absent. While we may see our loved ones as fading way, in reality, they may be living the old gospel hymn, ‘Just a Closer Walk with Thee.’ This book gives the caregiver, or any reader, great spiritual hope.”

Kathryn Huddleston owned and operated a leadership training business for 23 years, supplying services internationally to profits, non-profits and government agencies. In 2001 she closed the business to take care of her father, afflicted with Alzheimer’s and aortic stenosis, to ensure him the highest quality of life possible. She Author of Back on the Quality Track: How Organizations Derailed and Recovered, she holds the Ph.D. from Vanderbilt University. She has been a professional speaker for 25 years, has taught Bible for 16 years, and remains an advocate for the elderly and disabled