Designing Climates of Blame or Responsibility 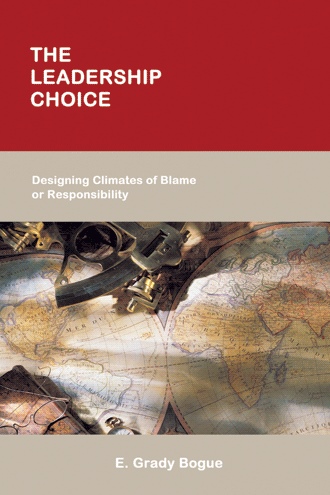 Preface This book has its origins in four stimulus events. The first of these is an assignment I accepted a few years ago to write a column on leadership for the Knoxville Business Journal. This was to be a column directed to a wide variety of business, governmental, civic, and educational leaders. The most important piece of intelligence conveyed to me by then founding editor, David Keim, and affirmed by current editor Amy Nolan, was that the column could be no more than 700-800 words. As with many folks having long experience in colleges and universities, I can deliver an extemporaneous lecture of an hour or a twenty page paper without breaking a sweat. But to write something meaningful and sensible in 700 words is a challenge of majestic complexity. I found, however, the discipline of brevity and journalistic writing to be an adventure of no small pleasure, and the column has enjoyed an affirming response from many readers. In a sense, the book is an extension of those essays. A second stimulus was my admiration for those writers who could convey a powerful and lingering thought in a few well crafted words. The first exemplar that comes to mind is Hugh Prather who wrote a little book Notes to Myself in 1970, in which a singular thought of one line to a paragraph is found on each page of his book. As a writer I remember this one: “If the urge to write is not followed by writing, then the urge is not to write.” And this reflective note “Perfectionism is slow death…When I have listed to my mistakes, I have grown.” A second example is Kahlil Gibran’s 1926 widely read book Sand and Form. So much wisdom packed into so few words… “One may not reach the dawn save by path of night.” A third example was Robert Townsend’s 1970 Up the Organization, with a leadership thought jewel found on each page…good advice such as “…keep all the conflict eyeball to eyeball.” A fourth example is Lao-tzu work Tao Te Ching (a 1973 translation by Stephen Mitchell): “When you’re content to be simply yourself and don’t compete or compare, everybody will respect you” and “To lead the people, walk behind them.” And a final is Max Depree’s inspiring and informing 1988 book Leadership is an Art in which we find this definition of leadership role that I think is the most concise and informing of anything I’ve read: “The first responsibility of the leader is to define reality. The second is to say thank you.” A third provoking event occurred this year in one of my graduate seminars in which one of my students, Ferlin McGaskey, was gracious enough to share a one-page column related to a leadership theme we had been discussing in class. The column by Bruce Barton dealt with the importance of leadership choice and affirmed how every choice “helps us to write the story of the human race… Greatness of character doesn’t wait on favorable circumstances to deal it a ‘favorable’ hand. It plays with honor whatever hand it is dealt.” That idea had been a cornerstone of my own life, and the quote resonated with what was in my heart. The concept of “choice” became the word I fixed on for the title of these brief essays. This was not the first time I had been advantaged in my own learning from ideas and sources shared by my students. Learning from those you teach is a great unheralded pleasure and benefit of teaching. Fourth and finally, this accent on “choice” caused me to remember a line from Carl Sagan’s book The Dragons of Eden, which I read on the beach at Hilton Head Island over 30 years ago. In that informing work, Sagan suggested that curiosity is the hallmark of our humanity. Over the years, I have continued to think about those attributes that contribute to our humanity. On the debit side, some might argue that our capacity for cruelty to our own kind is particular to our humanity, and perhaps so. Remaining on the credit side of the humanity ledger, however, I have come to believe that our ability and our duty to decide, to make choices, is central to the human journey. As a man whose faith has been central to life, I have often wondered what it means to be created in the image of God. They are many great ways to answer that question. One could easily argue that the opportunity and the duty to learn, to love, to serve, and to create mark our image. For me, however, two essential ways that we reflect God’s image reside in our drive to curiosity and our duty to choose. When one speaks of leadership attributes and leadership role, a sustaining and active curiosity seems fundamental for those who hold the lives and promise of others in trust; and our willingness to stand to duty in “The Choices” we face, the decisions we make, seem central to task and responsibility. I am approaching those years whose challenges and joys were well expressed by an older friend when he said, “When I bend down to tie my shoes, I look around to see if there is anything else to be done while I am down there.” In my journey as a military officer, college professor and college president, I’ve been a happy man in my work for close to half a century, arising each morning with a grin of expectation on my face and enthusiasm in my heart for the work that lay before me. I offer these essays as a tribute to leadership mentors and exemplars in my life, men and women who served with honor and stood to duty in many different organizational settings, who elevated my vision of what was possible for my life and who served as exemplars of leadership nobility and courage.

“The Choice” is an engaging and informing collection of concise and lively essays designed to deliver core leadership concepts in journalistic style for quick reading and easy understanding. Leaders in corporate, civic, governmental, educational, non profit and other organization settings will find these reflective nuggets attracting and compelling. Chapter titles such as “Demonizing Dissent”, “Executive Soul Erosion”, “Virtuosos of Avarice”, “Leader as Guerilla”, “Windows into the Soul”, “Choice as Instrument of Freedom” anticipate ideas and values designed to enhance leadership effectiveness and moral impact.

E. Grady Bogue is Professor of Leadership and Policy Studies at the University of Tennessee, Chancellor Emeritus of Louisiana State University in Shreveport, the author of nine previous books on leadership and accountability themes, is published in journals such as Harvard Business Review and Leader to Leader, with seven of his public speeches carried in Vital Speeches of the Day. He writes a bi-monthly column “On Leadership” for the Knoxville Business Journal.