Living with Spirits Good and Bad

The life of Robert D. McPhee 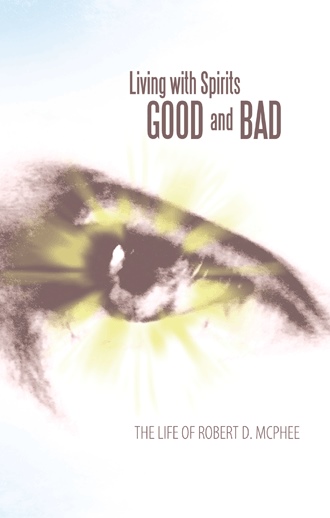 After living an active life in several different locations for sixty years, Robert McPhee found himself in a small brick rented house near the end of a two mile black topped road that he had recently moved into with his ailing wife. He was hundreds of miles from family members and became unemployed. He applied for unemployment, and would walk daily two miles to the nearest store to purchase a paper, searching for employment. There were very few houses along the road, all on one side. The other side of the road was woods. Those walks were good exercise and gave Bob plenty of time to reflect on his life up to that point. At times he decided to do the walking through the woods where the only sounds were from the small animal life and the rustling of the brown and yellow leaves in the breeze. It was in this setting that he began to think about life in general and wondered why and what our purpose in life was all about. He came to the conclusion that there was bound to be more about life than what he had experienced. After much meditation he decided to pray and gave himself to God for his services. He also made a vow that the next time they moved he would, if at all possible, attend church every Sunday. Bob decided to search for reasons for life. He started his search in church and the study of the bible. After a short time of study he became more of a believer but was not satisfied. He wanted to make contact with God. After many prayers and meditation over a period of time there came in view a light. The more he strained to see God the larger the light became. The light was like a small semi circle, and as time went on this semi circle grew until one day it completed the circle. With this it looked like a human eye. The outer circle was yellow like the white of an eye and the center like the pupil but was colorless and seemed to have no bottom to it. This process took quite a period of time and seemed like a training process with the completion of the circle a climax. In Bob’s effort to see God, he concludes that what he saw was imbedded in his mind and all anyone will ever see of God. In a short time after this a chill came over Bob and he seemed to be set free of everything and anything of material matter was no longer important to him. Bob has come to the conclusion that people talk to God with their conscious mind and God talks to people by leaving thoughts in people’s subconscious mind... The thoughts come to people and many times they do not realize thought may have been placed there by the Holy Spirit., and do not realize where it really came from.. Bob in asking God for guidance for everything he does knows where the thoughts come from and is very great full for them..

This book covers various parts of my life from the time I was seventeen years old. On my eighteenth birthday I left home hitch hiking 300 miles to my aunt`s house where I had a cousin being married. My uncle was a German immigrant and I lived with them for a time. He taught me that if I took any job and tried to do it better than anyone else did that the employer would find something better for me. This proved out to be true as I started at the bottom of a Bakery company and in nine years I became the manager of that company. In the early days of that employment I learned a lot about salesmanship and became a leader

As the author of this book I have lived a much diversified life. I have had a career in Tool Making, Bakery management, Bakery marketing consultant, TV store owner operator, Sales manager for others and thirty years in the hearing aid business. Have change residence twenty two times.