A True Story About A Miracle in Miami 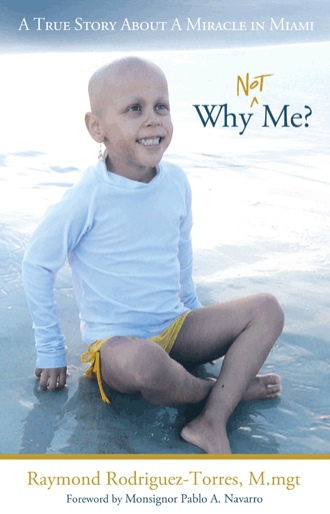 I’m sure it’s nothing Serious.

The morning of July 11, 2007, began like many others. I woke up in a different city in another hotel room. On this day it happened to be Orlando, Florida, which was nice because I was closer to home. Soon I would be back home spending some quality time with my girls, Bella, Rayna, and Shannah.

I was preparing for a meeting and looking forward to catching my short flight back home to Miami at 3:00 pm after my half-day meeting. At the time I worked as an executive for a multinational company, and I traveled quite often.

At 7:00 am, I called home and spoke to my very tired and worried wife, Shannah. She told me they had experienced a terrible night. Bella, my oldest, who was four and a half years old at the time, had complained all night of stomach pain, was getting up frequently to go out to the living room, and kept tripping and falling to the floor. By now Bella could not stand, and Shannah was very concerned. I could sense fear and panic in her voice. Now, my wife always feels a greater sense of security when I am home, but I could tell by the tone of her voice that she was deeply concerned. It was more than just the “wish you were home” type of tone. I tried my best to ease her worry, and told her it might just be a virus that had temporarily entered the spinal fluid, and that she should take Bella to the hospital. But not to worry, I told her. I was sure it wasn’t anything too serious. Shannah had already spoken to my father, a pediatrician and the former chief of staff of Miami Children’s Hospital, who was on his way to my house to examine Bella. Bella had been complaining of a bellyache for the last several days, but she had been seen by her pediatrician, a Gastroenterologist and an Emergency Physician. She had had an abdominal X-ray and an ultrasound. It was found that she had gas, and we were instructed to give her laxatives to alleviate the bothersome lingering discomfort. There did not seem to be anything of any major concern.

At 9:00 am, I spoke with my father, who had already managed to get to the hospital with Bella and Shannah. He was concerned. He explained that they were planning to perform a lumbar puncture on Bella to examine the condition of the spinal fluid. I know it may be standard protocol to do a lumbar puncture, but the sheer thought of having a large needle inserted into my little girl’s spine was not exactly what I thought this day would bring me. I felt very helpless not being able to be there and take charge, the way I normally would. The thought of Shannah and Bella at the hospital without me made me very uneasy.

I decided I should leave my meeting and go home. I informed my boss at the time, Sheri Jepsen, who is an absolute angel, what was happening and that I thought it would be best if I left. She agreed and actually adjourned the entire meeting. I am very grateful for her compassion, because I know few supervisors would be as understanding and accommodating.

I called American Airlines to see which earlier flights were available. There was a 1:00 pm flight I could get on; I asked the operator to please change my ticket. She informed me there was no record of my ticket for the 3:00 pm flight. I informed the operator that I had my actual printed boarding pass for the 3:00 pm flight with me; how could the system show that I had no ticket for the flight? After much back-and-forth, she informed me I would have to go to the airport to resolve my issue. I kept thinking there must just be some type of computer glitch and that it would easily be resolved as soon as I arrived at the airport. Two of my colleagues, Shari Mitchell and Cliff Jones, who were also going to the airport, dropped me off.

As we arrived at the terminal, my cell phone rang; it was my father. He told me the neurologist believed Bella had Guillain Barre Syndrome. This news hit me like a shockwave. I was caught off guard. Surely there had to be some mistake. This couldn’t possibly be true. My little girl was doing okay when I left home. She simply had an upset stomach or a simple virus. The doctor must have made a mistake. I immediately turned white and almost began to cry in the car right in front of my colleagues. They noticed my reaction to the call. I looked at them and my voice trembled as I said, “She has a terrible disease,” and I exited the car. 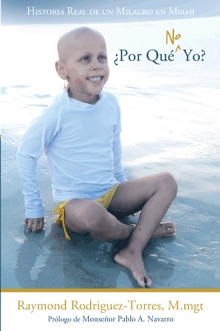 In 2007, Raymond's life changed forever when he received a phone call that his four-year-old daughter, Bella became paralyzed overnight. Bella was diagnosed with stage 4, cancer. Experts the world over believed that Bella would never walk again and had only a few months to live. By miracle, today Bella can walk, run, jump, and is cancer free!

Why Not Me? describes, in a very inspirational tone, how Raymond believes there is a divine purpose for everything. Raymond is an executive who dedicates his free time to helping cancer families and others to live lives of purpose, balance & victory. He holds the title of Sir. Knight in the Knights of Columbus and enjoys giving back to his community. He lives in Miami with his daughters and his wife Shannah.

Bella’s story illustrates the power of prayer and that God does exist and is alive in our world. This book, which describes the officially investigated miracle “story behind the story”, is sure to inspire you!

“Rarely do you find a story that underscores how great God is and how He is moved by simple unrelenting faith and sincere prayer. Why Not Me? will bring you to tears and then touch you with a joy that only happens when you have witnessed a miracle. As you walk with Bella on this amazing trip, her words will rekindle your faith and challenge you to trust God. If you have never believed, you will surely wonder why you haven’t. If you believe, here’s another reason why we do.”

"As a physician trained in pediatric imaging often diagnosing terrible diseases, witnessing Bella's miracle challenged me to re-examine my own faith. Why Not Me? stands as a powerful witness to God's call for us to be faithful. No matter your faith or lack of it, this story as told through the eyes, ears, and heart of a loving father will move you closer to God."

Raymond Rodriguez-Torres was born in Toledo, Ohio and raised in Miami, Florida. When he was 9 years old, he read the words that would guide his life forever: “God’s Gift to you is who you are; your gift to Him is who you become.”

Raymond has enjoyed a successful career as an executive in the pharmaceutical/biotechnology industry. Raymond also serves as a personal life, motivation, and faith coach. He has won numerous awards for his many contributions to the advance of healthcare both in the U.S. and abroad. Raymond is a charismatic and inspirational, speaker who gives motivational lectures in business, academics, and ministry. He has served as a consultant to various Presidents & First Lady's of countries in Latin America on healthcare. Raymond began his undergraduate work at the University of Florida and holds a B.S. in Health Service Management from Columbus University and a Master’s Degree in Management from Oral Roberts University where he graduated with honors. Raymond was awarded the prestigious “Outstanding Master’s of Management Student Award” by Oklahoma's highly regarded ORU School of business. Raymond completed his proficient coaching certification at the University of Miami. Raymond is a member of the American College of Healthcare Executives, The American Society of Health System Pharmacists, and The International Coach Federation. He is listed in Who’s Who in Executives and Business and Who’s Who Among Top Executives. Raymond has helped many individuals both in their personal and professional lives achieve their ultimate potential and find purpose in life.

Raymond believes "That to he that much is given, much is expected." Raymond holds the title of Sr.Knight in the Knights of Columbus and as the family director of his council, Raymond enjoys giving back to his community. In his leisure time, he enjoys spending quality time with his family, and fishing. He lives in Miami with his wife Shannah and has been blessed with two beautiful daughters, Bella and Rayna.