The Journals of a Missionary Nurse 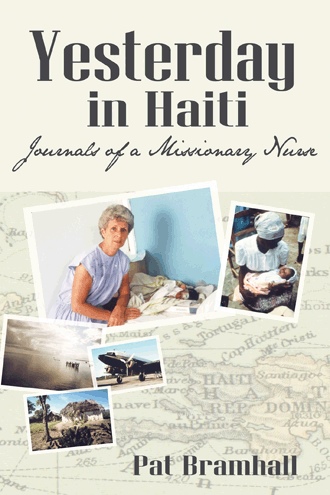 One little boy came with an ear ache, and when I put the otoscope in his ear, I gasped. I couldn’t believe what I saw! No, not a curled up leaf this time, but hundreds of tiny flies, crawling around in his ear! I said, “Anne, come and look, and tell me what you see.”

We managed to get all the flies to leave by gently patting the side of his head for a few minutes while they all flew out. I put some antibiotic ear drops in his ear, and then some cotton, so nothing else could get in. I gave his dad some antibiotics for him, some vitamins, and some Vermox for worms, and sent him on his way.

This book is a window into a two and a half year period of my life as a missionary nurse in the country of Haiti, during a very unstable time of government there. It was a time of many coups and violence in the country; yet,even with this happening we were still able to have our clinics and help the people.

As I talk about my experiences in Haiti, it always feels like it happened just yesterday, when in reality, it has been more than twenty years ago that I lived there, in Cap-Haitien as a missionary nurse. Haiti was a much gentler place then, and no one but the police had a gun. My room-mate, Flo, and I lived in a beautiful home out side the city, and far from Port-au-Prince. It was during the exit of Papa Doc Duvalier, and the fighting and chaos were far less where we lived, so we were able to keep our medical clinics going most of the time, with out threat of violence from the many coups that took place while we were there.

I am now retired from nursing, though I had an eight year stint of careing for my mother as she was in her nineties. The Lord took her home when she was ninety-seven.

Now, I live in the old gold mining town of Tonopah, Nevada. Two of my sons live here, so I am frequently met by children, grand-children, and even great grand-children in the Post Office, the grocery store, or at church.