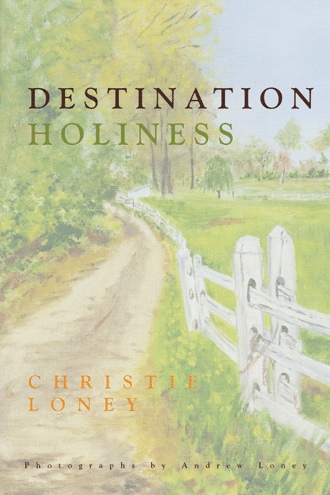 It is a privilege to write the foreword for this book which journals the life of a beloved Christian friend. From my very first contact with Christie many, many years ago I knew she was a person of prayer who had been touched by God. Her journey is a true testament to the handiwork of an awesome God who lovingly cares about the details.

Scripture tells us the Lord inhabits the praises of His people. This book is Christie’s offering of praise to her Heavenly Father. TO GOD BE THE GLORY!

It is certainly true people learn what they live. Destination Holiness is a lifetime collection of stories, illustrating God’s forgiveness and faithfulness. Christie’s heart message draws us closer to our Heavenly Father through her stories.

In a time when so much is being said about physical health Destination Holiness offers a daily prescription for spiritual health.

As you begin this adventure, may “God, the glorious Father of our Lord Jesus Christ… give you wisdom to see clearly and really understand who Christ is and all that he has done for you. I pray that your hearts will be flooded with light so that you can see something of the future he has called you to share. I want you to realize that God has been made rich because we who are Christ’s have been given to him! I pray that you will begin to understand how incredibly great his power is to help those who believe him. It is that same mighty power that raised Christ from the dead and seated him in the place of honor at God’s right hand in heaven.” Ephesians 1:17-20 (LB)

As you make your way through the pages of this book may the Lord bless your journey toward Holiness.

Destination Holiness invites you on a journey. Each week provides a theme that is developed each day, along with scriptures and stories that encourage the reader to consider their own life’s journey. There are Challenges and Love Notes from the author, and all along the way a sense that it was written as a personal letter just for you. Indeed it was, as the author and finisher of our faith journey toward holiness is Jesus Christ and this book is truly His inspiration.

The author was born in Scotland. At age twelve she migrated with her parents and seven siblings to Tasmania, Australia where she lived in a house built by convicts.

At twenty-one she graduated with a nursing degree and set out across the Pacific to U.S.A. where she met and married her engineer husband. They have four children and seven grandchildren and one great-grandchild.

She is well known as a speaker and teacher in both U.S.A. and overseas. She has lived in South Korea and China and travelled in Europe, India, Nepal, Central Asia, New Zealand and Central America.

This rich background has given much food for thought that has found its way into magazine and newspaper articles, poems and songs.

This is her first book. Since publishing "Destination Holiness" three other books have been published by Xulon Press; "Life by the Lynn", "Table Time" and "The Wonder of Seven". She is currently working on her fifth book which hopefully will be available the end of 2018. Christie recently moved with her husband, Bob, from Kodiak, to Haines, Alaska. She continues to be involved in short term mission and ministry in USA and abroad.