Homeless in the City II

A Mission of Love 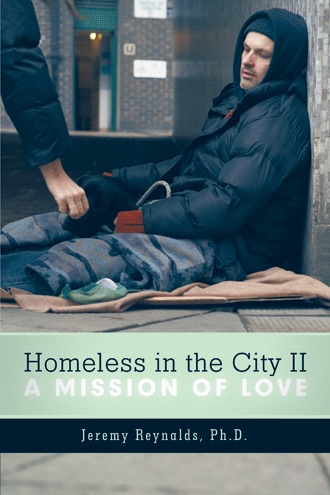 HOMELESS IN AMERICA I was not on a mission for God, just a broke young Englishman stranded in the American Southwest. I had made it to the New Mexico-Texas border, but ended up standing in the blazing sun for hours. Cars sped by, but none stopped. As the hours passed, I was getting more and more tired, so I left the highway and walked to a store. I wearily looked through a telephone directory and called the first church I could find. I asked whoever answered the phone if he could help me find shelter. The man told me that I was welcome to sleep on the church floor, but I would have to walk there-a distance of about five miles. Needless to say, walking that far on an unknown Texas highway was more than my body or spirit could endure. I thanked him and dejectedly and hung up. Walking back a few yards, I saw a restaurant which was about to close for the night, but it didn't matter because I had no money for food. I saw that behind the restaurant there was a storage shed filled with odds and ends and I looked for something to sleep on. The only thing that looked suitable was a piece of fiberglass, and that was my bed for the night. I woke up early the next day and headed down the highway again. Soon, a trucker stopped and gave me a ride to Phoenix. By this time, I was starving. Without me asking, the kind trucker shared his sandwiches with me. Looking back all these years later, I see the Lord's hand in my life. Back then, I was just another homeless person on the road, but today I am founder and CEO of Joy Junction, New Mexico's largest emergency homeless shelter. The transformation came through God's grace in my life. Growing Up in England I lay in bed and listened to the muffled, angry voices coming from the living room. My heart began to pound. My mother and father were arguing again. About what, I did not know. I just knew they were fighting. At the age of eleven, I hated my parents' almost nightly fights. I knew my mother was unhappy living with my wheelchair-bound father, diagnosed several years earlier with multiple sclerosis. On a number of occasions, she acidly told me that if my dad had not been sick, she would have left him. At other times, Mom informed me that I should be grateful she stuck around to take care of my older brother and me. Lots of parents would not have done that, she said. Mom succinctly explained to me that she only married my father because he told her he would apply for a commissioned officer's position in Britain's Royal Air Force. He failed to do so, and now, because of his disability, there was no chance of that. She felt cheated and angry. As sharp tones filtered through the muffled voices, I focused on the one bright spot on the horizon: I would be leaving for boarding school in a few weeks. Initially, I looked forward to this as an escape, but later it became my own private nightmare. At night I was the routine victim of schoolboy pranks, such as having my bed short sheeted. Days were filled with dread as I worried about being laughed at for my stammering when asked to give an impromptu answer. If that wasn't enough, there was also the necessity of faking a sickness to escape the perils of hockey games, rugby football, cricket, or cross-country running-all nightmares for my unathletic body and so much fun for others to laugh at. I was learning that I didn't seem to fit in anywhere, so I retreated into a world of books, where no one demanded anything from me. This traumatic time was perhaps the beginning of me emotionally shutting down. The pain of being continually taunted by a multitude of pampered and merciless British kids was too much for me to bear. The school was in Bournemouth, only about an hour's bus ride from my home on England's south coast. Ironically, my escape was to go home many weekends, to the home from which I had tried to escape. Looking back, perhaps I concluded that the tension at home was somewhat bearable compared to the abject misery I endured at school. Admittedly, there were a few fun times. One early morning, all the kids in my dorm awoke at about two o'clock, buzzing with excitement. The chapel was on fire. Since a destroyed chapel meant no church services in the morning, and maybe for a long time, the kids were elated. In my pre-Christian days, these chapel services were extremely boring for me-just something else in my life to be endured rather than enjoyed. The next morning the fire and the circumstances surrounding it were the talk of the campus, and did we love what we found out! The word was that the school chaplain had gone for an evening of entertainment in a nearby town. Returning to school (where he lived) in the early hours of the morning, he found the chapel on fire. However, this hip spiritual advisor had not gone to the dance dressed in robe and cassock. He had been dressed in full sixties regalia, including a Beatles-style wig and high-heeled boots. Naturally, we all thought this was hilarious. No one talked about anything else for days after. I scarcely remember anything about most of my classes and my professors.

Jeremy Reynalds is an iconoclast who has combined a genuine passion for the hungry, homeless, abused, and addicted with a creative ministry model in New Mexico. His books give a face to what is often a faceless problem in today's society. This chronicle of his conversion, calling, and creation of an important agency of service—plus his guidelines for setting up a gospel rescue mission—is a valuable read for all who want to follow his lead and demonstrate their commitment to Jesus Christ in a practical manner. - John Ashmen, President, Association of Gospel Rescue Missions In this amazing story, author Jeremy Reynalds, who founded and runs New Mexico's largest emergency homeless shelter and was once homeless himself, shares how he rose from homelessness to the pinnacle of academia, earning a doctorate in intercultural education at Biola University in La Mirada, California. In addition, the book contains stories of precious souls who have fallen on hard times (many of whom we pass by daily often without a glance) and gotten back on their feet again with the help of the Lord at Joy Junction. Jeremy’s story inspired and challenged me to pay more attention to the needy and oppressed among us. I pray that it will likewise encourage you. Dan Wooding, founder ASSIST MINISTRIES and ASSIST News Service (www.assistnews.net) Homelessness in our country is a story about tragedy and hope. Dr. Reynalds weaves together this story beautifully. The power of his words, however, can be found in his compassionate acts. Joel John Roberts, CEO of PATH Partners and Publisher of Inforumusa.org Jeremy Reynalds is truly ‘the expert’ on homelessness in America. He uniquely understands the issues of hopelessness and despair that drive many to live on the street. He also has learned how to break the homeless cycle and bring hope and healing to broken people and their families. Since his initial outreach to the homeless in a street-mission coffee house in Santa Fe, New Mexico, Jeremy has developed and expertise of helping the homeless that few possess today. His unique insights provide solutions to this growing problem in our society” Randy Wren, M. DIV. Hospital Chaplain Jeremy’s call to homeless ministry came through his own life’s journey of struggles and ultimate joy. Joy Junction, one of the Southwest’s largest homeless shelters, is the result of one man’s response to God’s call, as he has witnessed God’s leading through every step of his life. Ann Edenfield Sweet Wings Ministry Executive Director/Founder

Dr. Jeremy Reynalds was born in England and emigrated to the U.S. in 1978. In 1986, Jeremy founded "Joy Junction," now New Mexico's largest homeless shelter. He writes for the Assist News Service, and has authored several books. Jeremy holds a master's degree in communication and a Ph.D. in intercultural education