Spiritual Watchers Over the Nations 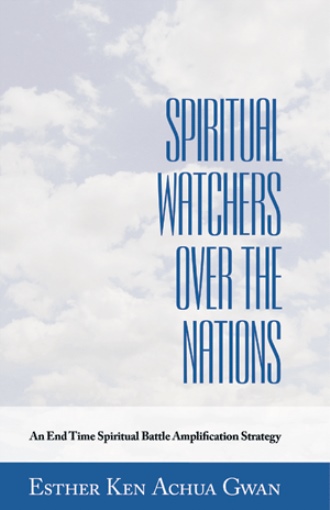 WHY DO WE NEED SPIRITUAL WATCHERS?

God’s Plan Is The Original

Satan did not create this organization. Satan did not, and has never created anything. He is a created being himself. He is imitating what is in the kingdom of God. He makes copies of what He sees God doing. We live in the Xerox age, so we all understand what a copy is….it looks authentic. A copy is the exact replica of the original. However, those who have mastered the art of copy replication know how to distinguish between the original and the copy.

Changing the Atmosphere of The Nations The spiritual forces of the wicked one are changing the atmosphere in the nations unopposed. Demons are actively alive and at work in all aspects of planetary activities. A growing number of saints are purifying themselves, and turning to the Lord through prayer, and fasting, faithfully interceding with supplication, thanksgiving and praise.

God’s people will need to activate the heavenly army so that a corresponding amount of activities in the spiritual realm by divine intervention will be taking place. That is the Lord’s need for the moment. God’s instruction now is to watch and pray. This is the earthly part of what should be going on. The angels will do the watching on the divine side. They will watch. They will do the Lord’s bidding by participating in the battles, and also in ministering to the saints as God’s messengers on their behalf. But they will do it only in answer to prayer from us!

Confrontation at Levels Not Humanly Possible

The confrontation between the earthly proud kings and the living God was mediated by divine intervention. In the book of Daniel a voice fell from heaven (Daniel 4:31) for Nebuchadnezzar and the fingers of a man’s hand wrote on the wall for Belshazzar in Daniel 5:5. In the New Testament, it was Herod, proud and stubborn who was eaten by worms Acts 12:23

Herod's judgment was preceded by intense prayers by the saints. They did not ask God to send an angel but their prayer was enough for Him to send one because they needed the intervention of an angel. The angel had no problems entering a prison that was securely locked. He had no problem accessing Peter who was sleeping, bound with two chains between two soldiers in a dark dungeon on what was supposed to be his last night on planet earth. The darkness could not stop the angel. Instead, light shone in the prison cell when the angel stood by Peter. The chains with which Peter was bound did not stop the angel. In fact, when he struck Peter on the side and raised him up, the chains did not wait to be told what to do. They fell off Peter’s hands! Guards do not intimidate angels. In fact the angel and Peter passed the first and second guard posts undetected. Iron gates are not an obstacle to angels. The iron gate that leads to the city opened to the angel and Peter of its own accord. Acts 12:1-10

There Are No Obstacles To Angels

There are places where human beings cannot enter, but angels have no problems. There is no such thing as an obstacle to angels. No one can keep them out of a place to which the Lord God has decided to send them. They will go at the Lord’s bidding but how He longs to send them in response to the prayers of His people.

Spiritual Watchers will go through the fire to rescue the saints at the Lord’s bidding. They will close the mouths of lions. They will enter sub marines or quench volcanic activities at the Lord’s bidding. We already saw that they are not subject to the law of gravity. They cannot be consumed by fire. But earth must cooperate with heaven because this is God’s sovereign choice. The God who answers by the whirlwind is not impotent against tornadoes, typhoons and hurricanes, but earth must cooperate with heaven appropriately. Earth is a co-laborer of heaven. The angels are co-laborers and fellow servants of current saints, and of the brethren the prophets. We must worship God, but we must also collaborate with angels.

We Need the Enormous Power of Angels in Some Battles

Angels will fight along with the human soldiers. Sometimes however, the angels fight alone. Angels are extremely powerful as demonstrated by this passage:

That night the angel of the LORD went out and put to death a hundred and eighty-five thousand men in the Assyrian camp. When the people got up the next morning—there were all the dead bodies! 2 Kings 19:35 (New International Version) One angel, in one night killed 185,000 Assyrian soldiers. Their power is beyond human understanding.

To Strengthen the Church

The Lord specifically says His bride in the nations needs to be strengthened. The church, the bride of the First Born must be strong and ready when He returns. When the Lord says there is a need, then we must all agree with Him that there is a need for the church to be strengthened. It is not an option. It is an obligation. It is not a suggestion to be taken lightly. God’s suggestions are commands. We must pray for divine intervention to strengthen the church, the body of Christ. We must pray that God will send angels from heaven in their millions and will spread over all the churches to strengthen the faith of the saints, and turn our expectation to the soon coming Groom.

God’s call to intercede for the nations came simply in the words of Psalms 2:8: “Ask of me, and I will make the nations your inheritance, the ends of the earth your possession.” Actually, praying for each nation can be a daunting task. Breaking down nations into cities, towns, villages, and inhabitants can be even more overwhelming. God, in His mercy, has shown a way to move His hand in prayer so He will deploy angelic assistance in the form of spiritual watchers over each nation. They will amplify the intercessor’s efforts, strengthen the body of Christ, and go anywhere God sends them, with none of the limitations to which humans are subjected.

I was born in a tiny village about 5 miles outside Bamenda in the highlands of Cameroon in West Africa. Baptized as a baby and confirmed at the age of ten, I was a young Presbyterian with a curious mind growing up in the hunting and farming community of Banjah. When animals died in a trap or people got sick and died, I often wondered where living things came from and where they were going. Through Sunday school and other religious classes, some of my questions about life were addressed. As I was introduced to the certainty of an afterlife, I began to wonder about my own eternal destiny at a very young age. Somehow I knew that there was more to life and Christianity than I was experiencing. Despite my regular church attendance, I knew I was a sinner and was not sure I was qualified to go to heaven.

In 1968, I enrolled in secondary school in Saker Baptist College in Victoria. There I met missionaries from the U.S.A. and Canada who taught religion as part of the school curriculum. Morning devotions and films on Billy Graham crusades gently but surely began to catch my attention. I was in my third year when I finally came to understand, during one of our spiritual emphasis sessions, the importance of confessing one’s sins to God and asking for forgiveness. I was one of the many girls who wept as we wrote our sins on pieces of papers and tossed them in the great bonfire that marked the end of the holy week. I was certain God had touched my heart. However, without specific follow up, I staggered down the years amidst the typical turbulence of adolescence, with only sporadic memories of that night to give me a sense of restraint when my faith wavered.

As a first year student in the university in 1975, I decided to use distance from home to stop going to church altogether. However, faithful friends kept inviting me to a Christian student gathering which I finally decided to attend. On the 4th of February 1976, I sat listening to one of the Science lecturers as he told a group of students about his Christian life. Somewhat intrigued by how he personalized His experience of Christ, I decided to talk to him after the meeting. He explained to me that being a Christian was much more than being baptized, confirmed, or partaking in Holy Communion. The word itself, without the letter “a” means “Christ in”. Thus, he helped me understand how to invite the Lord Jesus Christ into my heart after sincerely confessing my sins.

This marked the beginning of an exciting era of personal faith and Bible based Christian living. My faith has grown over the years, through challenging times as a medical student in my home country as well as graduate schools in the Universities of London and Liverpool in England. With my professional skills and daily Christian walk, I was powered to go through 27 years of fulfilling service at progressive levels of responsibility. I have been married to my husband, Moses, for over 29 years. We are blessed with four grown children, an adopted teenage daughter and a granddaughter.

In 2006, I was living and working for a Christian organization in Rwanda when I enrolled in a course designed to take me through the bible in 90 days. I read the bible three times that year, a pursuit that greatly increased my understanding of the Word. Following the visit of my beloved spiritual mentor who has since gone to be with the Lord, I began to perceive in my heart specific messages I know were coming from the Lord. I wrote them down and spent time establishing their biblical validity. After over three years of timidly sharing them with individuals from time to time, I believe it is time to globalize this message of expedient intercessory prayer. Spiritual Watchers Over the Nations provides a much needed tactical design for effective spiritual warfare. It is written to provoke every intercessor and every Christian for that matter to call upon the Lord to amplify their strategic approach to prayer by sending angels to assist in the end time harvest of the nations.