Mom…Can You Move My Legs? 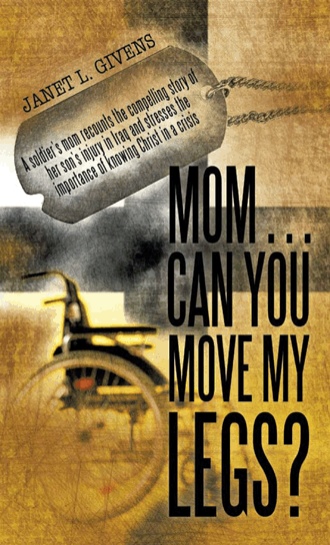 Saturday morning, July 22, 2006 began very typically for me. I did what I normally do, or at least what I used to do. I am an early riser, so by 7am I was fully clothed and already at the computer. It was a beautiful morning and I was excited about closing on our new home in a few days. All was well in my world. Even though my world had extended to the Middle East, I was still content. The reason my world was so far reaching was that my son, Brad, an infantryman with the 101st Airborne Division, was on his second tour of duty in Iraq. Nevertheless, all was well because He was in God’s protective care. I lived with this thought daily.

When men and women become part of the military and are slated for war, parents or guardians are educated on the protocol of how we are to be informed and what to expect in the event that our soldier, marine, sailor, or airman is killed. It is not a pleasant conversation by any means, but certainly necessary. I was specifically instructed that under no circumstance will anyone representing the armed forces notify us via telephone. The person I spoke to was emphatic and said if by chance I received a phone call with bad news, it was probably someone playing a cruel, insensitive prank. He further explained that there are people who so strongly oppose war that they actually resort to doing things like that.

I received a phone call on that lovely morning of July 22, 2006 that started out like a typical Saturday. My first instinct was not to believe the person that was on the other end of the line; however, the calm, firm voice assured me that he knew my son personally. Addressing him by his rank and name, the voice also assured me that he was alive. This person proceeded to inform me that he was not supposed to call me, but felt compelled to do so because of his personal relationship with Brad. Once he knew I was convinced that his call was legitimate, he proceeded to inform me that Brad had been very seriously wounded.

I don’t remember at what point both my hands began to grasp the outer edge of my desk. What I do remember is by the time I hung up I noticed my palms were white, stiff, numb, and sore. As I was listening, I didn’t realize that I had begun gripping the desk as if holding on for dear life and trying not to fall.

The gentleman said Brad and his company had just completed guard duty when he was shot while exiting a Humvee. I was stunned. In my mind, I knew the possibility of injury or death existed, but hoped and prayed that my child would not be among those statistics. I had spent weeks with eyes glued to the horrifying images on the television screen, switching from one channel to the next at the onset of the war.

I also knew that thousands return without a scratch, though not necessarily mentally unscathed because of what their duties entailed. This was my prayer, my ongoing dream…that my son would return home safe and unharmed. Brad had made it five years and counting as he admirably pursued his dream; but on this day, both our dreams were shattered.

The words of the man who made that disheartening call were as reassuring as could possibly be. He went on to say that my son had actually consoled the other soldiers while lying on the stretcher just before being transported by helicopter. He sounded both proud and humble at the thought of Brad’s cheerful attitude, and grateful that he was alive.

I appreciated that call, even though the gentleman was in violation of the standard operating procedure. I would imagine that others in uniform have taken a chance and done that very same thing under similar circumstances.

My heart was racing and my mind was whirling as I sat there, trying to come to grips with the nightmarish message I was hearing. The thoughts of my baby being shot, severely wounded, and so far away from me, left a vast hole in my heart. I felt blank and empty. I don’t know any other way to describe that feeling.

Amazingly, I didn’t cry at that time. Anyone who is close to me knows that I am extremely tender hearted. I cry over hungry children in poverty, love stories, happy endings, sad endings, fiction, non-fiction, weddings, you name it. I have a tendency to feel the pain of others and become moved to tears, but, strangely enough, at that news and that moment, I didn’t cry.

As my mind attempted to process this information, I could not stop myself from envisioning the accounts of what took place. I imagined Brad climbing down from the vehicle, happy that their shift had ended, and anticipating what he and the rest of the guys would be doing later that evening. Then, with my eyes closed, I could hear the sound of the bullet buzzing through the air, penetrating his clothing, and piercing his flesh.

In my mind, I could see his face, both startled and anguished as he felt a surge of pain in his back, falling slowly backward, and, finally, bouncing onto the ground. I could see others hovering around him, scurrying to find out where he was hurt and calling for help.

I continued to listen to the voice on the other end of the phone. It was actually soothing, yet, the sense of urgency was unmistakable and rather frightening. Still, the comforting words of that man meant a lot to me. He was a man of God, so, I calmly asked him, “Do you believe God heals?” He replied that he did, so we believed together, right then, and he prayed for my son to be healed.

He informed me that someone from Walter Reed Army Medical Center would contact me soon with an update on Brad’s condition.

The military’s official number of soldiers wounded in Iraq stands at 31,911, although numerous estimates put the real number at over 100,000. With more than 50,000 American troops still stationed in Iraq, it’s inevitable that the number wounded will continue to grow. In her candid, inspirational new nonfiction, "Mom…Can You Move My Legs? A soldier’s mom recounts the compelling story of her son’s injury in Iraq and stresses the importance of knowing Christ in a crisis" (published by WestBow Press), Janet L. Givens shares her personal story of coping with the trauma of war using faith in God and biblical guidance. In July 2006, Givens’ son, Army Sergeant Brad Harris, was wounded in action during Operation Iraqi Freedom. She relates his decision to enlist and the courage and determination he summoned in the wake of Sept. 11, realizing it was his calling to defend his country. It was always her prayer that Brad would return home safely, but on July 22, 2006, both of their lives would be irrevocably changed. Brad was shot in the lower part of his spinal cord and would spend four months at Hines VA hospital in Chicago in recovery. Upon receiving the news, Givens immediately reached out for help, both from God and her congregation. They were there to comfort and guide her as faith was “catapulted into high gear,” she recalls. Her church, the Family Christian Center in Munster, Ind., came forth with an outpouring of support, and a group of “prayer warriors” immediately began praying for Givens and her family. Relatable and true-to-life, Mom…Can You Move My Legs? carries a powerful message that will resonate with readers from all backgrounds. “Like you, an array of difficulties has interrupted my life throughout the years,” Givens writes. “If you are currently in the midst of a seemingly hopeless trial, I pray that the words contained within these pages will plant a seed that will grow into great faith in God.” See how faith and prayer can change lives in this uplifting new book.

Janet L. Givens is retired from a 33-year career in the steel industry and currently resides with Brad and her husband, Greg, in Crown Point, Ind. She is actively involved in the Workman of the Word ministry, a Bible study group at her church, and spent 15 years spreading God’s word via an email ministry. Some recipients of her ministry now demonstrate their own faith through emailed prayers which are shared in the pages of Mom…Can You Move My Legs?, her first published book. In the early stages of her son Brad’s recovery, she began contemplating the dire need for God’s love and faithfulness in the fragile lives of other injured military personnel and their families. Janet, her husband Greg, and son Brad currently reside in Crown Point, Indiana. They have two other sons, Michael David Harris, husband and father of three children, also of Indiana, and Kellen Christopher Givens, of Los Angeles, California.