Journey from a Childhood Dream to Reality 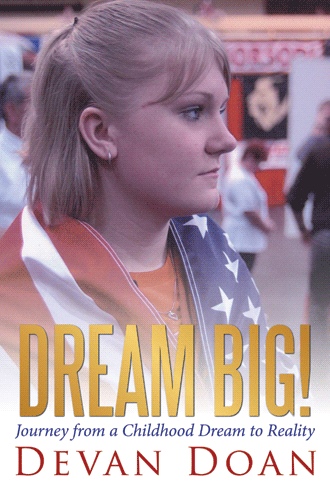 Chapter 1
An Inspiration is Born

Strong, unique, compassionate, unstoppable, humble, smiley, family-oriented, loving, selfless, and determined. That is how I’m described. As I take each word and analyze what they mean, I smile and realize how true they all are. I am your average twenty-two-year-old girl, but yet, I really am not so average. I am a world class competitive powerlifter. Not something people hear everyday right?

I guess you could say I was “born into” powerlifting. My dad started competing when I was three years old. He opened the door to this amazing life long before I really understood what lay ahead, and long before any of us knew the future I had in store for me.

I attended every one of my dad’s competitions, mostly because I had no choice in the matter, but also because I had a job. I was my dad’s number one cheerleader, and he needed me. From the second my dad sat down on the bench until the second he locked out the weight, I chanted “Go Daddy Go!” repeatedly. My mom gave me that job and it stuck. It kept me going to the meets and made me admire my dad even more. As I watched him lift and chanted for him, I was in awe. He was so strong, courageous, and admirable, everything a father should be and more. Even at such a young age I was proud of him, proud to call him my dad. He continued to amaze me more and more. I thought that there was no one in the world who was stronger than my dad. He was a real true hero, but more importantly, he was my hero.

As I grew up, the chanting continued. I became known as the “Go Daddy Go Girl” everywhere we went. Dad said he couldn’t lift without me, and I believed him. In a noisy room, I was all he could hear. The louder the crowd got, the louder I got. It was one little girl versus an entire crowd. I was his motivation, his reason to keep pushing, and his inspiration. Those were some pretty big shoes to fill, especially for such a small girl. But I took the challenge head on, not knowing that he was to become my inspiration as well.

Devan Doan started her life with dreams of being an Olympic athlete. What never occurred to her was the possibility of becoming a world class powerlifter. Thanks to the inspiration of her father, and the encouragement to always make her dreams come true, this story travels along Devan’s journey. Exploring all the experiences life threw at her from the greatest moments of success and joy to the lowest moments of disappointment, death, and depression. Combining the basis of her strong faith and incredible love for her family, Devan learns a valuable lesson. She discovers who she is, who she wants to be, and just what life and her journey are all about.

I was born and raised in small town Wisconsin. I grew up with a love and passion for writing. When encouraged to write a book about my life, I laughed at the idea. But before I knew it, I started writing down some ideas and realized I had a pretty amazing story to tell. I am a competitive female powerlifter with a lifetime of memories and lessons to share. I am a May 2010 graduate of the University Wisconsin-Oshkosh with a degree in Nursing. When not lifting or competing, I enjoy traveling, reading, and spending time with my family and friends.