Afraid to Believe in Free Will

The Human Tendency to Avoid Responsibility for Free Choices 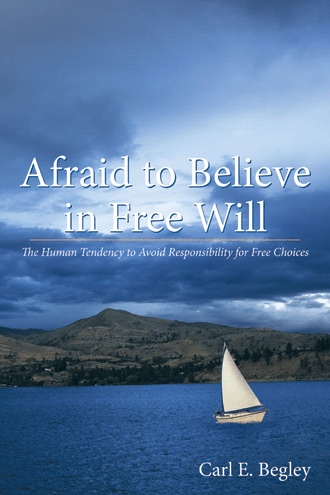 The greatest of God’s largess, when He
Created all, most prized by Him, and best,
As most kin to His own quality,
Was the will’s freedom, crown of all the rest,
Whereof all creatures made intelligent,
They all, they only, were and are possessed.
—Dante

The principle of self-defeating actions leading to bad and punishing consequences is an ancient preventative mechanism. Before human consciousness evolved to include free will, this mechanism held sway as it does today with animals. Now that we have become civilized, we are capable of thwarting the mechanism, and a sizable portion of society is doing just that. To young ghetto citizens who have chosen bad and self-destructive acts, such as dealing in drugs and using a gun, We may be sending this message: Don’t feel bad about your illegal behavior. You are not responsible, and you can do nothing to change. Don’t even try. Your problems were caused by and can only be solved by society and the government. All you need to do is wait for someone else to take responsibility for your bad behavior, correct it, and protect you from the negative consequences.

In the late 1800s and early 1900s, the victim of a gunshot wound suing the gun dealer who sold the gun to the shooter would have been unlikely. Such suits are not so unusual today. What beliefs and attitudes underlie the differences? Aside from the acquisitiveness of attorneys, one of the causes of this attitudinal change lies in the prevailing disbelief in free will. Though most people have thought little about whether they believe in free will, their underlying opinions are declared by their actions.

PERSPECTIVE ON BELIEF IN FREE WILL

As did William James, I have chosen to believe in free will, all the while acknowledging that it is a mystery that I cannot prove. Mystery though it be, if we deny or ignore free will, we leave out a rich and extensive range of actions and experiences that make us human. It’s too much to leave out if we have a genuine interest in ourselves and other people.

Unlike free will itself, belief in free will, and why it matters, can be examined. In my clinical practice and in observations of current events as reported in the mass media and professional publications, I have witnessed the fear of free will. Based on these observations I will explore and clarify a number of issues, as well as review some present and past attitudes toward free will. This book:

In discussing issues of good and evil or other theological concepts, the intent is to stay within the boundaries of the psychology of religion without crossing over into theology. When the book speaks of God and related religious issues, it will be in reference to the image of God as experienced by humans and the psychological implications of these experiences. For example, when you read herein of how the benefit of choosing to give in a charitable way is more valuable than the benefit of receiving, I may include the saying, “It is more blessed to give than receive,” which may seem to speak to theology. However, it will become clear that the quote is used to make a psychological point.

Some free will choices are clearly good, some clearly bad, but many are ambiguous. They may be neutral, or their moral value may be controversial; they may be hard to assess. Even when discussing clearly understood issues of moral rightness and wrongness, however, points about volition will usually not depend on whether the reader agrees with any moral judgment. For example, when it’s implied that it is morally good to prevent the wasteful exploitation of our planet, the few readers who disagree can still find what I say about relevant free will choices interesting.

Free will is a frightening yet magnificent part of what it means to be human. Dr. Carl Begley analyzes and uncovers how we defend against the fearful elements of our God-given freedom, diminishing our individual dignity and magnificence. This book recommends the sometimes difficult path of honoring our free will by forgoing excuses. When we recognize and take responsibility for our choices, we can enjoy the optimism that comes with personal empowerment.

In addition to his forty years of private practice in clinical psychology, Dr. Begley has taught the psychology of religion. He has published a half-dozen articles in professional journals, including some on the subject of Charismatic Christians as patients. He currently lives in Florida with his wife. They have three children and four grandchildren.