From Patriarchs to Prophets

A Poetic Anthology of the Old Testament

by David I. Wright 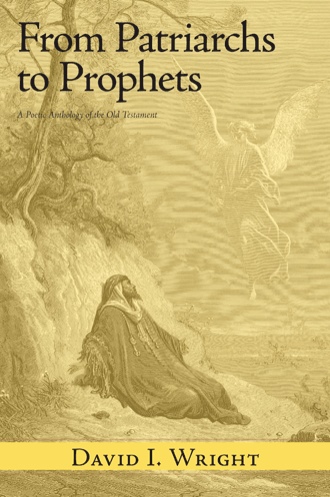 A classic example of the poetry you will enjoy in this book: MUST FIRE FALL UPON YOUR LAND? Mount Carmel was quiet as cloud shadows drifted across the hill. The birds were singing quietly and the trees were very still. It seemed all nature realized the showdown that would ensue. Today Almighty God would prove to idolaters what He could do. Then, as if on cue, up the hill walked Elijah in confident stride, Followed by Baal’s prophets clambering arrogantly in their pride. Behind them came their heathen king whom they all adored. All were here to prove, once for all, who would be their Lord! The sacrifice of bulls came towed behind, prepared and dressed. Following them came all of Israel, whom sin had so distressed. For today the old prophet had summoned the challengers to him! Today he’d prove their idolatry was deceitfulness and sin. The challengers took the stage as the prophet yielded first to them. Call fire upon your altar! old Elijah said. See what Baal will send! The old prophet sat down in the shade knowing it might take awhile. And so the showdown began, as God put Israel’s idols up for trial. As the sun climbed into the sky, approaching noon, no fire came. The old Prophet looked on, as he watched grown men become insane. They climbed upon the altar, like wild animals that had made a kill. They danced around and screamed – quite a tirade upon this hill. They cut themselves with rocks and sticks, exposing flesh to bone. Still, their dumb idol answered not, as Elijah mocked, Is he home? This drew quite a frenzy from the people and they began to riot. He sleeps! Elijah said, Shout louder – and as fools they tried it! Their tirade done, no fire fallen – people lay ‘round the altar wasted. But Elijah knew he was the winner, as to his altar now he hasted! He placed the stones upon his altar, where they had been before. He had the people pour water on his altar and then he called for more. Fill the trenches round-about with water. Make the altar soaking wet. I’ll prove to you what God can do, for you’ve seen nothing yet! When the altar was well wetted and the scorners laughed in jest, Old Elijah bowed his knees and crossed his arms across his breast. Oh, God of Abraham, Jacob, Isaac and Israel, the old prophet cried, Prove today that You are God, for on this hill Your authority is tried! Today You will have the victory; today You’ll have the final say! When we are finished here, Baal’s evil prophets I will slay!” Suddenly the sky grew red in fury and hot winds began to blow. Oh God, Elijah cried! Today You will make this people know That You are God of all eternity, and that You are God of them; And now upon my altar and my sacrifice, I pray, Your fire send! Then, just as if on cue, cloven tongues of fire fell upon the crowd! Men and women fell upon their faces and cried to God aloud. The God of Israel has visited us this day! He it is we will serve, Though His love, mercy, and abundant pardon we do not deserve. The old Prophet smiled as the fire burned slowly out upon the hill. Now kill these evil prophets here. Their arrogance we must still! Scripture says they took them to Brook Kishon to slay them there. All of Baal’s wicked prophets died; not one of them was spared! And as they stood upon the hill that drought had parched to sand, Elijah told the king, Listen! I hear the sound of rain upon the land! As the drops of rain spattered to the earth and erupted into dust, Israel turned their hearts, again, to the God they now would trust. The champion had summoned challengers to prove that God was true, And just as the old prophet had expected, Almighty God came through. How about you my friend? What idols have you there within your hand? What must God do to prove Himself to you? Must fire fall upon your land? Or will you listen to the prophets and the sages who lived so long ago – Those who once proved God true, in stories just like these you know? Your devotion and allegiance, your Heavenly Father demands of you! So lay aside the idols of your heart. To the one and only God be true!

Are you looking for a new way to experience your Bible? Then this book is for you! From Patriarchs to Prophets presents a classic rendering of the great stories of the Old Testament expressed through poetry. These delightful poems are sure to help you capture and experience the Bible in a captivating and easy-to-understand way. Whether read alone or in correlation with devotional or Sunday school materials, From Patriarchs to Prophets delivers stunning spiritual insights and sound scriptural guidance while remaining engaging and easy to read. It is a must-have for any poetry collection.

David Wright grew up in the rolling hills of Berks County, Pennsylvania. He was homeschooled for a number of years and graduated from Twin Valley Bible Academy. Currently, he and his wife have one son; they attend church at Twin Valley Bible Chapel. He and his family now live in

Pennsylvania’s  charming and historic Amish Country. David is actively involved in his community working and volunteering in emergency services.