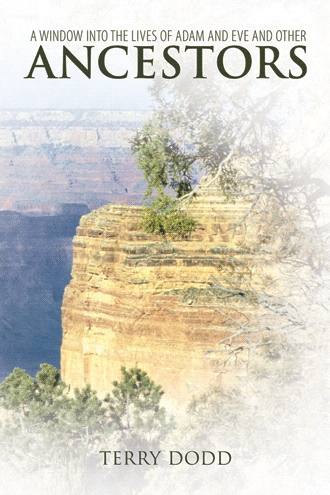 Ancestors is the parallel narrative of two poles-apart “pioneering” stories which, even given their very great differences, both illustrate man’s God-given desire to push forward in life through both external and internal obstacles. The first of the two odysseys is an imaginatively expanded pioneering saga of real-life Greenville (“Green”) Dodd and his family, which takes place within the American historic framework of the mid-to-late 1800's. The second–and obviously quite different–odyssey is built upon, around, and within the first nine chapters of the Holy Bible’s book of Genesis.

Thus, in one story, God’s Word is intermingled with creative detailing of the lives of the universal ancestral couple, Adam and Eve, and likewise extends through another nine generations to Noah and his family. Before the dawn of man’s history, God purposed to populate Earth with those made in His three-person image by giving him a mind, a soul and a spirit. From what God tells us in His Word, He acted on this plan for man about 4,000 years before He would also take it upon Himself to provide a Way for mankind to atone for his certain and disastrous rebellion to come.

When God formed the first human being out of dirt from His newly created planet, and then blew into his nostrils the breath of life, Man came alive as flesh and living soul. Adam, God’s first human creation, would thus become the first to not only wonder about life, but to explore much within his microcosm. In addition, he would have the capacity to have knowledge of the divine. Man would be followed by Woman and together they would become the single most extraordinary couple in man’s history. From Cain and Abel and through another eight generations and more than 2,600 years to Noah and his family--and man’s having blown his second chance with God--would come even more awesome drama.

Fast forward from the Flood nearly 4,200 years to 1850 A.D. and a time when hundreds of thousands of men and women continued to chase a dream in a country for which God also had a plan. This is the second of our two parallel stories. It was during this period that the greatest migration in human history (other than the Exodus from Egypt) took place. More than 300,000 Americans would brave the hazards of wilderness to start life afresh west of the eastern United States. Henry David Thoreau would say of his countrymen’s tendency at the time: “If hell lay to the west, Americans would cross heaven to get there.” By cutting crude trails and living difficult trials in crossing much of America on foot for the many thousands preceding–and the millions to follow–these pioneers were exploring and developing their own new world microcosm.

What are we to do with what God has put inside each of us? What inflames our heart? For those who believe in Him, is it not the kingdom of God? He has called us not just to Christ, but to advance His kingdom in the areas for which He has gifted us, whether that be preaching or teaching; art or gardening; public service or sales and service . . . or even writing.

Ancestors is a fascinating series of both biblical descriptions and behind-the-scenes glimpses into the lives of Adam and Eve, Cain and Abel, and on down the ancestral line to Noah and his family. Also revealed in each chapter are the lives of a rugged pioneering family making their way through much of the 1800s as part of one of the greatest human migrations in history.

“Terry interestingly weaves together parallel narratives involving his pioneer ancestors and a retelling of the Genesis story. In doing so, both sets of ancestors are thus presented in a way that puts these people’s lives into a day-by-day perspective.”

—Wayne Clark, Bible Teacher and “Minister in the Marketplace”

“Thank you for allowing me to read your historical fiction manuscript, Ancestors. I found it very interesting!”

Having nearly lost his life twice before his eighth birthday, Terry Dodd struggled through much of his adult life in coming to learn that God is in control. He and his wife Helga make their home in the Atlanta area. His interests include not only the writing of his books, but a Christian newsletter, a humor-in-juggling ministry, and service on a hospital auxiliary board.