Jonah, John, and the Second Greatest (but Most Avoided) Commandment 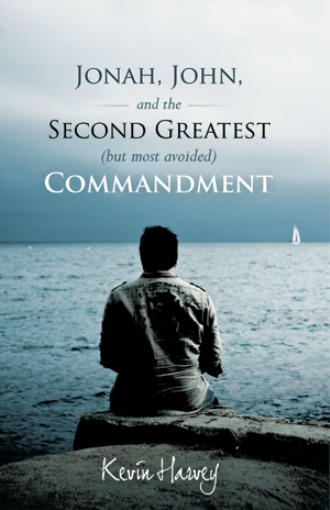 About three thousand years ago there lived a prophet, a man of God, who was instructed by the very God to whom he had devoted his life to go to a faraway land filled with some nasty people. “Tell them about Me and My love,” God told him. “I still love them despite their sin, and so should you.” But instead the prophet showed God how he truly felt about these people by fleeing in the opposite direction, eventually leading to a stormy trip on a boat and an all-expenses-paid cruise inside a large fish.

Almost a thousand years later, there lived another Man. This One recognized that most people, even those who considered themselves to be God’s children, tended to relate to the prophet of long ago in the way they selectively gave out their love. “It’s great that you love God,” He told everyone. “In fact, it is your most important job. But part of loving God is understanding and showing with your life the second most important job for you: loving others as you love yourself.” Shortly after sharing this truth, He showed just how much He truly loved others by dying for the sins of billions of people not yet even born.

This Man had a friend, an apostle of His. He was nicknamed “The Beloved,” as well as a “Son of Thunder.” For three years, he followed the Teacher, listened to Him, and truly understood His most important teachings. Many years after his Teacher’s death, this beloved apostle felt the need to write a letter to believers scattered throughout the world, reminding them to love others as they had been shown. Apparently, too many were looking more like the fleeing prophet of long ago than the Man who had washed His disciples’ feet.

How’s this for a pitch to a publisher?

“I’ve written a study about the second greatest commandment, loving our neighbors as ourselves.”

“Oh, so the scripture is taken from Matthew?”

“No on Luke, and not the book of John you’re thinking of.”

“Am I on a hidden camera show?”

“No. It’s a study on what Jesus said was the second greatest commandment . . . and it’s based on the story of Jonah.”

“Jonah and the whale?” That’s the problem with how we’ve learned about Jonah while growing up. Every time we heard the word “Jonah” as kids, it was followed by “and the whale.” I can hear the cheer now: “You say ‘Jonah’; I say ‘whale.’” “Jonah!” . . . “Whale!” . . . “Jonah!” . . . “Whale!” But Jonah’s miraculous story is so much more than his one-of-a-kind trip inside a large fish. (Notice I said “fish,” not “whale.” Though I may not ever be called politically correct, I’ll always do my best to be biblically correct.) His is a story of obedience—or rather, disobedience. And the root of his disobedience is none other than a lack of loving his neighbor as himself. If he truly had loved the Ninevites as himself, he certainly would not have wished them to be condemned to hell, as he showed with his act of disobedience.

And John’s teachings on loving others are awesome reminders of what Jesus taught and what Jonah needed to learn. (Note: Yes, like you, I noticed that all three names begin with the letter J, which makes this study sound like a convenient sermon. But it’s just a coincidence, I promise. You will not hear me mention James, Josiah, or Jehosophat. That is my vow to you.)

I’ll never forget the first time I read the book of 1 John. I was in junior high and attending my church’s annual summertime youth camp. Every morning before breakfast, we were supposed to spend some time reading the Bible and praying. Maybe the reason I remember this particular morning is because it was the only time I ever actually did it, but nevertheless . . . So I opened up my Bible and found 1 John, no doubt for two reasons: one, it wasn’t in the “boring Old Testament”; and, two, it was really short. (“Hey, Pastor, guess what? I read an entire book of the Bible for my quiet time today! I’m a really great kid, aren’t I? Maybe tomorrow I’ll read all of Philemon.”) When I began reading this book for the first time that morning, I found things like: “The man who says, ‘I know him,’ but does not do what he commands is a liar, and the truth is not in him.” No way did I just read that in the Bible! I thought, eyes wide open now despite only four hours of sleep. I know tons of Christians not doing what God commands. I wonder if they’ve ever heard this stuff before, I went on, thankful I was outside and away from all mirrors. I would soon find out that John’s letter has a whole lot more that is hard to read for the believer thinking pretty highly of himself, including my favorite prophet, Jonah.

What I like so much about Jonah is that I can really relate to him. Not the fish part of his story, of course, but the way he so easily disobeyed God. I’ve heard and read many stories during my life of people who give their lives to God, feel called to be missionaries in Africa, and pick everything up and move right away, as though it was the easiest choice in the world. Or the former CEO who gave his life to Jesus, felt called to be a preacher, gave up his six-figure income, and sold everything he had to move onto a seminary campus. These are great stories to hear, if indeed they’re true, but my stories of obedience haven’t been so Lifetime-movie-of-the-week perfect.

Remember, Jonah didn’t become a prophet of God after he finally went to Nineveh; he was already God’s guy. And yet he still disobeyed God’s command. And even better, God still considered Jonah to be the man for the job despite his fleeing. That’s why Jonah is someone with whom I can relate. I consider myself to be one of “God’s guys.” I can honestly say I’m making an overall effort to always follow God’s direction in my life. But it’s tough. And sometimes I pretend I didn’t hear Him. I mean, we don’t get voices from the sky or burning bushes anymore. I know I’m not alone when I say that I sometimes pretend that God didn’t really say to do that. I reason with myself, saying, “How can I be sure that He wants me to do that for Him? If He really needs me to go there, He should just come on out and say it with a booming voice from the sky so I’m sure.”

Well, there’s no hiding what Jesus said is the second greatest commandment: love our neighbors as ourselves. And if we really think about all that loving our neighbors entails, then we have to admit the hard truth that we’re failing miserably.

For too long, the body of Christ has been focused on too many things that, quite simply, haven’t been working. The answer to a lasting, true revival in today’s world isn’t going to come from a continued focus on what we can and cannot do, which denomination has the most biblical theology, or achieving victories in social issues such as definition of family and the right to life. Instead, what our attention should be fixed upon is that the Son of God said the second greatest commandment we’ve been given is to love our neighbors as ourselves. In this book, Kevin Harvey has taken a biblical approach to help the body of believers define just who their neighbor is and what it means to truly love them as Jesus intended. If the body of Christ began to focus daily on following that one simple idea, then maybe—just maybe—the world would finally begin viewing the church as the salt of the earth and light of the world that Jesus had in mind.

Having both taught in the church and worked in Christian publishing for several years, Kevin Harvey has now focused his ministry on God’s children serving and loving others while here on earth. He and his wife, Amy, have two children and make their home in Wake Forest, North Carolina.