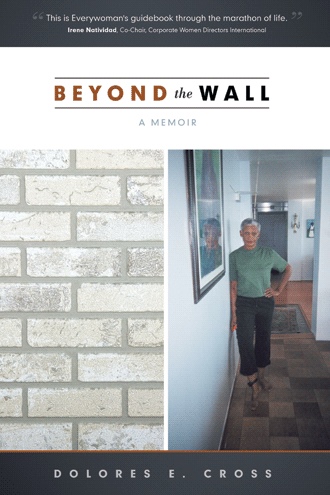 Dolores Cross got a wake-up call, literally and figuratively, at 2:00 one morning, from a man asking who she was and where she was.

As she glanced at the electronic bracelet around her ankle, she made a decision to answer the question of who she was. Not just to her caller, but to all people who have given themselves to a cause, only to be accused of a crime.

This timely and inspiring memoir emerged from a respected educational administrator’s harrowing year under house arrest. Cross’s ordeal became a personal journey to find new understanding, new strength, and hope. To sustain herself, she drew upon the lessons of memories, taught by her roots, her ancestors, her family, and her personal heroes, in the face of injustice, betrayal, and relentless prosecution.

In Beyond the Wall, Cross examines the external forces that pulled her down into a darkness far from everything she believed in and had accomplished. To weather the storm, she reflected on the life experiences that had motivated her to accept the presidency of a financially fragile college and the arduous climb from the abyss that followed her resignation.

Born in Newark, New Jersey, Dolores E. Cross completed her undergraduate degree at Seton Hall University, her master’s degree at Hofstra University, and her PhD at the University of Michigan. In a career that has spanned more than thirty years, Dr. Cross has been an educator and administrator at several prestigious institutions. She is the author of Breaking Through the Wall: A Marathoner’s Story and has contributed to many publications about the quality and accessibility of education, and is the recipient of numerous awards and honorary degrees. In her free time, she enjoys training for marathons. She ran her first marathon at age fifty, and has completed twenty since.