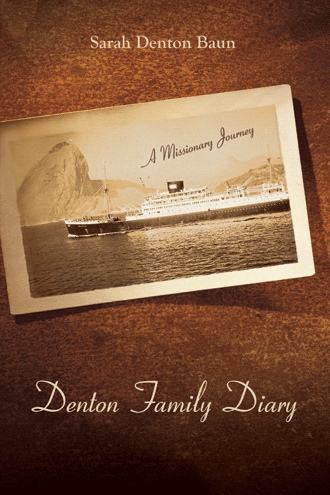 It took two days to get there on the train, a distance of 75 miles-if you could go straight across. We went first-class, which means we had private sleeping accommodations. The railroads are British-owned, but they are not heated against the cold of the altitude. We had no warm clothing, and only scanty blankets were provided, so we will always remember that long, cold, night on the train. Ice formed on the water and the windows frosted over. It was good to arrive in Cochabamba where the altitude is only 9,000 feet instead of 12,000. There are stately palms everywhere. On the return trip we had to climb back up the mountains. The train needed three engines, two in front and one in back.

Sarah Ellen Denton Baun (nee Byrd) lives in Nashville, Tennessee, with her husband, Glenn Baun, a retired Nazarene pastor. She has long visualized this project, although she felt somewhat intimidated by the sheer volume. Sarah has enriched these memoirs considerably by drawing from her sharp memory, having a remarkable recollection of events, places and people. You hold the result in your hands: a tender, touching and true story of one brave family, the Dentons, and their work in various countries bringing the Gospel to people and making their lives better, spanning the mid-forties to 1970. Through trials and tribulations, good times and much joy, the family is still bound together by the indelible imprint of their long-ago and far-away experiences. Ron Denton is sorely missed, but they can each feel his presence still in different ways -sometimes a phrase he used often, a twisting of the mouth when pulling a prank, or the bite of pepper and vinegar which he so loved. Sarah has traveled a long and diverse path in the course of her life, and is faithful to the Lord and the Church she so loves. Her children and grandchildren will be forever grateful for this undertaking, a veritable task of love, nearly two years in the making.

Sarah Ellen Byrd grew up in central Illinois where she attended a one-room school during all eight years. She was the third child in a family of six children. Their daily life included time for fun and games as well as work in the large vegetable garden which sustained the family during the Depression years. She enjoyed studying geography, and especially when the lessons included maps of faraway places, copying them with pencil and paper in minute detail. At that time she never dreamed she would one day actually see the Andes Mountains, learn other languages and cultures, live many years in South America, or later travel to Europe and Australia. She wrote this book while in her 80s and lives in a retirement center in Nashville, Tennessee. Sarah met and married Ron Denton in college. Soon thereafter they traveled to South America as missionaries.