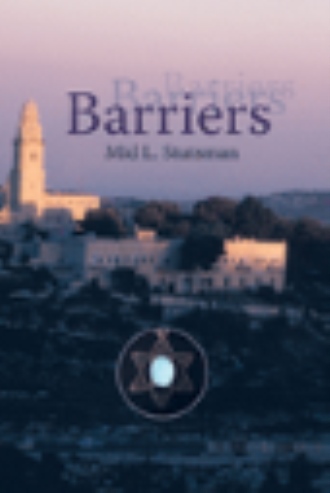 Anne stood on the Haifa beach and watched the seagulls circling overhead. She tossed pieces of her bagel out onto the sand and waited for the shrieks. The birds, anticipating a hand out, sailed in and dove for the tidbits. Amid the ruckus, a lone juvenile caught her attention. He stood to the side, the wind ruffling the down on his spotted breast.

She tore off several more chunks from the bagel and threw them into the mêlée, keeping one back, which she slyly pitched to the loner. He grabbed it up and took flight to avoid the scolding and pecking of his superiors over his insolence. “Yeah, I totally know how you feel, Buddy.” She ripped up the rest of the bread and hurled it at the squabbling birds.

Anne’s hand flew to her neck; she whirled around and faced Ari Milchan. A number of replies crowded into her mind, but she left them there, bouncing around and slamming into each other, while she eyed him in silence. Ari held up his hands and backed up a step. “Anne, I think we… I mean, I’d like to talk to you. I realize we got off to a bad start and my mother thinks...”

“Spinning your wheels.” Anne brushed the crumbs from her hands. She looked at him then and shook her head. “You don’t have a clue, do you?”

Ari said nothing. Anne wasn’t sure if his look of ignorance was feigned or real. She sighed and picked up her sandals. “What do you want to talk to me about, Mr. Milchan?” Her attitude shocked her conscience into action, but she ignored it.

“Mr. Milchan?” Ari mumbled. “Seems a bit formal. Are you not comfortable calling me by my first name?” He followed her to a bench.

She set her sandals down between them and turned to face him, “You are not a comfortable man to be around.”

“But you aren’t disputing it.”

Anne squinted. Was he trying to make her feel guilty?

Ari looked away and they both watched the waves snatching pockets of sand, taking them out to sea and then depositing what was left on the next venture in to the beach. The mesmerizing motion added more wrinkles in the sand at the edge of the water.

The major seemed far away in his thoughts. Anne eyed him with guarded interest. Maybe she had misjudged him. He was, after all, protecting his people. Still. She examined her fingernails and brushed sand from the cuticles.

“I…I know why you come here.” The Major’s voice, hesitant, almost timid, was bantered about by the wind. “These are the same waves I have stared at time and again, trying to make sense of life and the brutal slaying of my wife.”

“What?” She had heard him, but was taken back by his statement. His look pierced her heart.

“This was the only place where I could get away and think. The solitude was comforting, as odd as that sounds. It didn’t mock me. It just listened. Listened while I cried, ranted and raved, cursed and spit out all of my frustrations.”

Anne’s lower lip trembled. She felt the familiar sting in the corner of her eyes, but she sat motionless, not wanting to disturb the moment. Would he tell her more?

Ari stared at her for a moment before speaking again. “Your eyes are beautiful, like the ocean. So different from the warm brown of... She died in my arms, you know? My wife, Rani.”

“It took me a long time to acknowledge it was her blood soaking into my shirt. I just held her, not wanting to let her go. This was the only place that made sense to me afterwards…the waves coming and going, stealing the sand and bringing it back in a kind of rhythmic give and take. The constant lapping eventually wore down my anger, the same way it wears down and changes the shoreline.”

The anguish showed in his face. Anne touched her neck where it tickled and saw wet spots on her fingers. She turned away and closed her eyes, breaking the spell.

He stood then. “Would you mind walking with me?”

She did mind, but he had aroused her curiosity. Besides, he held a wealth of information that she needed. She didn’t see any problem using him the way he had used her. She brushed away the guilt about having such thoughts and picked up her sandals.

They walked quietly together until he broke the silence, “You aren’t saying much.”

“You are the one who came here wanting to talk.”

He stopped and faced her. “You’re still that angry with me?”

It was hard to come up with an answer. Anne couldn’t believe he didn’t get it. She looked down.

He spoke again when she didn’t respond, “I’m beginning to wonder if you need to slap me again before we can become friends? I can take that a little easier than talking to myself.”

Anne sucked in her breath and let it out slowly. “What do you want from me? My forgiveness? What you did with those Arabs, or Palestinians, or whatever you want to call them, was despicable.”

“I know. You’ve already made your feelings clear on that. And yes, I do want your forgiveness.”

“I didn’t know you then. You were just a meddling American who was interfering with a serious situation.”

“I know that now, Anne. I’m sorry. I don’t know what else to say. There are things you don’t understand. And for your own safety, I can’t offer you any more of an explanation.”

Anne’s throat tightened. She bit down hard on her lower lip. Ari’s nearness, his willingness to make things right made it tempting to let down her guard. Yet, she still didn’t trust him. She looked at the waves and relived their last time together when her hand had connected with his cheek. “Slapping your face before didn’t seem to elicit your friendship. What makes you think it will now?”

Ari threw up his hands.

Ann shifted her sandals to her other hand. “Look, just what is it you wanted to talk to me about?”

“You know what? Forget it. Not a thing.” He turned and walked away. “Go ahead and hold your petty little grudge, Mrs. Sheridan, but you’d better be on guard…this land is no fairytale!”

“You’re telling me!” Anne dropped her sandals and slipped them on before she started down the beach. After a few minutes, she picked up her pace. She refused to look behind to see if Ari was still standing there. She didn’t care.

Anne Sheridan is on a mission when she makes Aliyah to Israel. After an unexplained icon appears on her computer screen, following the suspicious death of her husband, she wants answers. But Anne has a secret of her own. Through a complicated twist of fate, her arrival in the Holy Land sets in motion a chain of events with fearful consequences of international proportions. Caught in the middle of a struggle between the Israeli Government and a feared Hamas terrorist, her quest takes a dangerous detour. Her only hope for survival is to examine her heart and place her faith in God. Ari Milchan, the intriguing Major of the Israeli Defense Force further complicates her dilemma. Can the two of them overcome ancient religious and cultural barriers for a chance to love again? Will Anne’s secret bring redemption or heartache?

Barriers begins with excitement on the first page and takes the reader on an exhilarating journey through present-day conflicts in Israel. With lyrical prose, Mid Stutsman weaves together an unforgettable story of faith and love.
Verna Cole Mitchell

A compelling book--as if ripped from the daily headlines exposing the raw reality of the age-old conflicts of culture and religion written with poignant relevance. Barriers reveals a tender heart established with unmistakable love and zeal for Truth. Jan Ross, President/Co-Founder, Heart of God International Ministries

Mid Stutsman is a mother of twelve children and “Nana” to ten beautiful grandchildren. She lives with her husband, Fred, on their Centennial family farm in Northern Indiana. God’s amazing love is the breath of inspiration for her artwork and the passion behind her writing.