A Vision of the Church that Would Transform the World 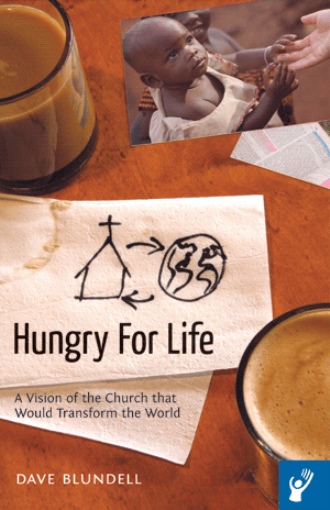 My good friend Ron owns a small coffee shop in the town we live in. He has a passion for running a business that can be used to impact the lives of the world’s poor. He has been on a few international trips with me and his heart is wrecked by the unnecessary suffering of children. Our mutual friend, Mike told me a story about his unbelieving social worker friend who was in the coffee shop one day talking with Ron about some of the situations she was dealing with. As with most social workers, she had many stories of people who needed help in one form or another. She told Ron about a 14-year-old girl she was working with. The girl had come from a very difficult home life and was now in the care of social services. When the social worker mentioned that the girl’s birthday was approaching, something or Someone touched Ron’s heart and he went out and bought a birthday present for this complete stranger as well as some day-to-day items that a teenage girl might typically receive from caring and loving parents. As Ron requested, the social worker delivered the gift package anonymously, and purposely returned to tell him that the girl was thrilled to receive a present like this. The 14-year-old commented that this was the first birthday present she had ever received.

The social worker was moved by Ron’s compassion and was telling Mike about this guy who owned a coffee shop and who did this small but great thing to practically touch this young life. When Mike told her that he actually knew Ron, she then asked, “Is Ron a Christian?” Mike answered that he was. Then she replied with this statement that I think best describes what is truly possible when Christians act like Christ. She said, “Well, if that is what a Christian is, then tell me where to sign up.” It was refreshing to hear a story about someone who was actually attracted to Christianity after meeting a Christian.

“Christians are hypocrites!” How many times have we heard that flippant comment from someone who has an axe to grind, legitimately or not? We’ve all heard many stories of people who claim to be Christians or who in some way carry the label of Christ in religious affiliation, but who live and act in a way that causes people to question that label. These stories are enough to make anyone cringe at the idea of being associated with them. The words “Christian” and “hypocrite” far too often appear in the same sentence when it comes to society’s evaluation or critique of the religious. 84% of young adults who would identify themselves as external to the Christian faith say that they personally know at least one Christian; however, only 15% say the lives of the Christians they know are any different from others in society. The chasm between these two numbers is an indictment upon the North American Church, debilitating us from representing Christ and diluting our capacity to affect change. However, the gap in these numbers also positions those who are truly passionate about mirroring Christ to radically stand out against both the godlessly self-centered and the godlessly religious of our society.

Mainstream Western culture is permeated by the sarcastic and overly critical self-righteousness of our generation and therefore exacerbates this commentary on the Church. The Judeo-Christian religious institution is the persistent target of mainstream culture. While Christians are often unfairly expected to be perfect, our failures have sadly earned for us this badge of dishonor, and our reputation or false pretense has deeply affected the Church’s potential for credibility or impact.

Although there are many reasons for our diminishing effectiveness, our current condition has largely been borne out of a fundamentally flawed understanding of what it means to be a Christian. When “born-again” Christians were asked, “What would you say are the two or three most important priorities for the Christian to pursue in terms of their faith?” the following picture of “Christianity” emerged. {{Table 1.jpg}}

Even by the narrowest definition of Christianity, most people think that the highest priority of being a Christian is to not sin, that to be good and not do “bad” is the highest goal of being a Christian. If we have communicated this picture of what it means to be a Christian, we have also set up the daunting standard by which the world will evaluate us. Most religious insiders primarily define following Christ as a prescribed set of mostly “don’ts.” Out of a commendable effort to live “right” and live in a way that distinguishes us from the “world”, we have created extra-biblical codes of behavior. As with many evangelical Christians, I grew up with a pretty clear understanding of what Christians shouldn’t do for which I later couldn’t find biblical support. Far more emotional and spiritual energy is spent trying not to sin or trying to conform to a legalistic, artificial code of behavior than is spent fostering a greater intimacy with Christ that results in a natural, Christ-like lifestyle. Instead of trying to get people not to sin, we should instead be focused on nurturing an environment where people are consumed with, and transformed by, His presence; the right lifestyle will be an inevitable byproduct.

In the most current and extensive research by the Barna Group, David Kinnaman demonstrates in his book, unChristian, that over the past decade the “outsiders” perception of Christianity has significantly worsened. In fact, North American society’s view of Christianity has never been more negative and un-Christ like. Listen to the findings:

In our national surveys we found the three most common perceptions of present-day Christianity are antihomosexual (an image held by 91% of young outsiders), judgmental (87%), and hypocritical (85%). These “big three” are followed by the following negative perceptions, embraced by a majority of young adults: old-fashioned, too involved in politics, out of touch with reality, insensitive to others, boring, not accepting of other faiths, and confusing. When they think of the Christian faith, these are the images that come to mind. This is what a new generation really thinks about Christianity.

Two very well-known thinkers and leaders, one a Christ-follower and one not, are often quoted to highlight the reality of our weakened standing in the world. Brennan Manning, a former Catholic priest and popular writer and speaker once said, “The greatest single cause of atheism in the world today is Christians, who acknowledge Jesus with their lips, then walk out the door, and deny Him by their lifestyle. That is what an unbelieving world simply finds unbelievable.” Similarly, Mahatma Gandhi is often quoted as having said, “I like your Christ. I do not like your Christians. Your Christians are so unlike your Christ. The materialism of the affluent Christian countries appears to contradict the claims of Jesus Christ.” Spoken years apart, from opposite sides of the world, and in difference contexts, these two statements unfortunately capture the candid snapshot that portrays the reality of an ineffectual Church. The dilapidated state of Christianity has reduced it to being considered simply another major world religion, the religion of the West. To most of the world, Christianity is just another option among many belief systems; instead, it should be recognized as the powerful, organic movement that couldn’t help but produce a new social reality defined by justice, starting with the world’s poor and marginalized, as we read about in the Bible. The biblical picture of a faith that was assumed to be evidenced in how the poor are treated is vastly different from what exists today. What began as the force of power, service, love, and compassion slowly morphed into an institutional and hierarchical religion that has very little resemblance to its original form or Founder.

Hungry For Life has articulated a bold vision to see the world transformed by a global movement of compassion and justice evidenced by the eradication of needless suffering. However, this vision will only be realized when selfless values and resulting actions are lived out by an ever increasing number of God’s people. The author presents a concise summary of physical poverty in the developing world and spiritual poverty in the developed world. Against the backdrop of these problems, he then paints a biblical picture of a compassionate community of faith, comparing the contemporary Western Church against what it was intended to look like. The final section includes the core value changes necessary for the Church to rediscover its place as a relevant force of love and compassion. This book is a prophetic call for followers of Christ, and specifically their leaders, to move away from religious institutionalism and move toward lives of simplicity and compassion.

Dave graduated from Canadian Bible College in 1994 with a Bachelor of Theology and now holds a Masters of Arts in International Non-Profit Leadership from Trinity Western University. He served as a pastor in a Christian & Missionary Alliance church for six years and was ordained in 1998. Dave later served as the Director of Global Operations for Global Aid Network, leading relief and development projects in numerous countries around the world, and in 2003 founded Hungry For Life International, where he works as the Executive Director of a growing team of staff and volunteers. Dave and his wife, Heidi, have two children: Caleb and Abby.