my life of service, struggle, faith, and hope

by Rev. Aaron Johnson, With Deb Cleveland & With Chuck Colson 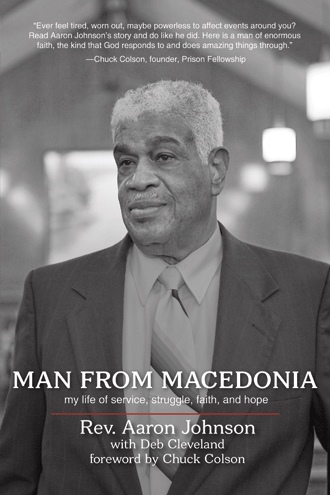 It’s not every day that your neighbor is hunted, shot, beaten and lynched—even in Willard. But the day Sheriff Jack Brown knocked on my mother’s door to warn us to stay inside, that’s exactly what was going on. It was August 1933 and Sheriff Brown was making his rounds to the sparse houses spackled around the countryside of Willard, a piece of “God’s Country” that lay in the northern half of Pender County, North Carolina.

Sheriff Brown had gotten wind of something and was trying to get us all to stay out of the way. He stood on our small front porch as the sweaty circles under the armpits of his khaki shirt slowly spread toward his back like lava; even the badge on his left shirt pocket drooped like a wilted daisy. One of our neighbors was going to die, and in 1933 a white, negro-friendly sheriff simply had no jurisdiction over men in white hooded sheets.

Willard was a segregated southern farming community of less than a thousand folks. Our neighbors the Wests, Murrays, Walkers, Gores, Wilsons, Pearsalls, Rogers, Jones, Powells, Brices, Rouses, Echoes, Boneys, Fillyaws, Johnsons and Olivers were a cereal mix of relatives and extended family. Down the highway a bit lived the white Wests, Murrays, Walkers, Gores, Johnsons, etc. At one time, the white ones owned the black ones, gave them their names and eventually their freedom—of sorts.

Several of the Negro families owned their own homes and small plots of land. Many of us blacks were sharecroppers by day and farmers at night. Potato pie and pound cake were our manna, collard and mustard greens our staples. Our faith poured out of us through hymns, shouts of glory and raised hands. But on this day, one of us was accused of getting out of his place. It would be Doc Rogers’s last day on earth.

A black male, young or old, had to be careful in those days. Invisible lines and unspoken rules could silently circle you like a rabid dog and before you knew it, your life would be on the line. I knew that danger from personal experience.

I was about sixteen years old. Every day before and after school, I drove a school bus. The white schools would run their buses for about four or five years and then they’d give them to us—which meant our school buses were anything but reliable. One morning on the way to school, the bus that I was driving broke down, again. I had to pull to the side of the road, leave a bus full of children unsupervised, and walk half a mile back to the general store in Watha.

All of the little communities in Pender County had their own general store where the white farmers gathered in the mornings for coffee. Most of the talk centered around crops, weather and how to keep Negroes in their place or how to use Negroes for profit. Usually these stores had the only telephone you could find in the community. My bus had broken down before almost in this exact spot. The white storekeeper in Watha had been nice enough to call the mechanics for me. I hoped he wouldn’t mind calling for me again.

On this morning I ran smack dab into one of those unspoken rules. I walked in and noticed only the eight or nine white farmers standing around with their coffee. In my haste I had failed to notice there was one white woman in the store. As luck would have it, I had stopped right next to her when I asked the storekeeper if he could make the call to the garage for me.

Suddenly one of the men walked up to me and said, “Nigger, don’t you realize that you are standing next to a white woman?” Then he slapped me—hard. The blow knocked me off balance as I tried my best to back away. I dropped my chin to my chest, afraid to look up. My soul stung. I was mad. I was cornered. And those many sets of eyes bearing down on me turned me to stone. I waited for the next blow and was surprised when it didn’t come.

“I-I-I apologize for having disrespected the lady,” I said. “I’m so sorry.” I hardly recognized my own voice as my apology soured in my throat like vomit. To my surprise the storekeeper went ahead and made my call for me. When I thanked him for his kindness, I backed out of the store then turned and started running toward the school bus. I kept looking back to see if anyone was following after me. I feared for the children on my bus and was trying to think, as I was running, how I would protect them if those men decided to come after me.

I climbed onto the bus, slammed the door and waited—never taking my eyes off the road toward Watha. The mechanic arrived and began working on the bus as I kept glancing down the road. Black boys were being strung up all over the South for less than I had done that morning. I looked around at the children crowded together on the seats yawning and talking amongst themselves, unaware that the shadow of death had just passed over them because of my foolish mistake.

Like I said, you had to watch out for those cloaked rules. No standing too close to a white woman. No speaking to her or making eye contact. And any black man who thought he was worthy of the love of a white woman was just going to get himself killed.

The fiery torches thrown into Doc’s house were hungry for dry wood and began licking up every splinter they touched. The men in dingy white hoods danced around his yard like hungry demons. There wasn’t a court in North Carolina that would convict these law-abiding citizens for simply protecting their own.

Tears spilled down Mama’s face as she looked across the field in front of our house. She held me in her arms as my brothers Tommy and James and sister Bernita clung to her skirt-tails. Black smoke billowed out of Doc Rogers’s house.

While the wooden frame flared up all around him, Doc pulled up some floorboards and dropped to the dirt below. He crawled from under his back porch through the cover of thick smoke and clawed through the tall grass behind his house—carrying his rifle.

Doc might have escaped all together but for whatever reason, he stood up and began firing his rifle at the Klansmen. The white men quickly pounced on him and then shot him until their guns were empty. As the mob encircled his body, they took turns kicking his head and stomach until their hate needed to get a breather. By the time they had put a noose around his neck and tied him to the bumper of their truck, no one could be deader.

A little bit later, the truck full of hooded men calmly drove past our house. They drove by as if on a Sunday drive—in tow behind them was the body of Doc Rogers bouncing down the dirt road like an old string of tin cans—his skin now chalky, his face unrecognizable. The men drove Doc all through Willard as a warning to those of us who might be thinking we were better than we were. Then they drove all the way to Burgaw, eleven miles from Willard, with Doc tied to their bumper.

In telling his life story, Rev. Aaron Johnson takes us to the front lines of the fight for civil and human rights in our country over the last fifty years. Whether being beaten and dragged from a dime store lunch counter, standing blindfolded before a Ku Klux Klan meeting, or praying arm-in-arm with a death-row inmate, Johnson shows us how human hatred and fear smells, sounds and feels—and how it feels to empower others with hope and trust.
Told with humility and humor, Johnson’s story reminds us that one individual—with focus and faith—can effect great change despite repeated hurdles. Readers will come to know Aaron Johnson as a friend and inspiring hero who suspects that God still has a few projects waiting for him on his to-do list.

A sharecropper’s son, Aaron Johnson led sit-ins under Dr. King’s tutelage, advised North Carolina governors, and served as state corrections secretary while pastoring a Baptist church. Deb Cleveland is the author of Hugs from Heaven: Portraits of a Woman’s Faith, a minister’s wife, and mother of three sons.