All I See Is Grace 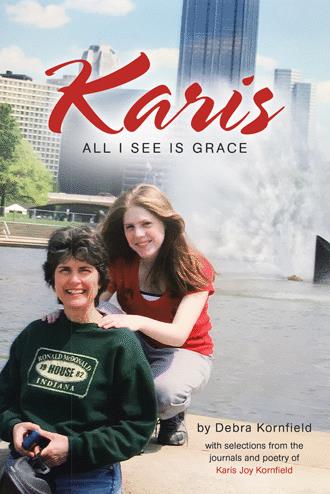 Karis found most unfair her access to the best doctors and hospitals in São Paulo. One morning she told me, “I’m not going to Einstein Hospital today. It’s not fair.”
“What’s not fair, Karis? That you’re sick so often?”
“No. It’s not fair I get such fancy treatment. Most of my friends have to go to Grajaú Hospital when they’re sick. I want to go there today and find out what it’s like.”
She would not be dissuaded. So we drove past the favela (slum) and through a poor neighborhood to the ER at our closest hospital. Already the inside waiting area was crowded and the rows of outdoor seats were occupied. Under a bright early-morning sun growing hotter by the minute we took our place in line for one of those outside seats.
“Karis, this isn’t going to work. I don’t think we have the luxury of waiting for your turn.”
Karis was determined, so with misgivings I supported her (literally) as the line inched forward toward those plastic seats. Once we reached them, I ran to the car for sunscreen and the emergency two-liter bottle we always carried, and emptied her ostomy bag. She was too weak to go by herself to the single bathroom that served all these people, and if we had gone together to stand in that line, we would have lost our spot in this one. Even a little oral rehydration fluid made her throw up.
As Karis moved seat by seat toward the refuge of the indoor waiting room, her diarrhea showed no signs of letting up. I was soaked with perspiration, but her skin was dry and had gone from red to pale—a bad sign. She had stopped interacting with the people around her, another bad sign.
“Karis . . . !”
“No, I’m OK. I can do this if all of them can,” indicating the ill people all around us.
“Then I have to get you to the front of the line.” Without waiting to hear that wouldn’t be fair, I pushed indoors and through annoyed people to the receptionist.
“My daughter is going into shock from dehydration. Her diarrhea won’t stop. She needs attention now,” I insisted to the impassive woman on the other side of the barrier.
“Is she bleeding?” the woman asked me. “No? Then she’ll just have to wait her turn.”
Elbowing back outside, I found Karis slumped against the shoulder of the man beside her, eyes closed, hands limp in her lap. “I don’t think she’s feeling very well,” he apologized. Just then a crowd swarmed out of the ER, sweeping up the outsiders on their way to the street.
“Probably the doctor has left,” the man observed. I ran back inside to confirm the story. Indeed, there would be no more ER at Grajaú until the next day.
Our benefactor helped me carry Karis to the car, and I raced across the city to Einstein Hospital. Within a few minutes, life-saving IV rehydration began. As I watched my unconscious daughter breathe, trying to process my emotions, the ER doctor appeared, brandishing a paper with her blood test results.
“Why did you wait so long to bring her in?! You have too much experience not to know she’s in serious trouble this time. We have to admit her. YOU are going to be the one to explain this to Dr. G, and I don’t want to be around when you do!” He listened aghast to my tale of the last several hours, and walked out shaking his head.
I repeated my story to Dr. G when he came to see Karis, now partially restored, in her hospital room.
“Sweet one, let’s talk,” he said, pulling up a chair beside Karis’s bed. After long discussion of the injustices in Brazil, they came to an agreement. Dr. G also practiced at the public São Paulo Hospital, where there was a separate wing for people with insurance. SPH wasn’t fancy like Einstein, so when she was a patient at SPH, she would feel on the same level as her friends.
Thus for a few months we went to São Paulo Hospital instead of Einstein, until another “It’s not fair” incident forced our hand.

“Tell everyone about God’s wonderful deeds” (Psalm 105:2). These words shouted to me at the same time that my perspective on Karis’s life was gradually but crucially altered through reading her twenty years of journaling. When Karis wrote the phrase “All I see is grace,” her suffering seemed insurmountable. All grace?? As a mom in anguish over her child’s adversities, I had to make sense of this for myself.

My first attempt to “tell” resulted in over 3,000 pages. Reducing that to 250 pages was no small feat. As I review what is preserved in this book, my heart cries, “Oh, but there’s more! So much more!” There’s an abundance of grace. Lavish heaps of it! That’s what Karis found, and what her journals showed me. There is abundance of grace for each of us, in our circumstances, just as there was for Karis in hers.

You may not face the extremities of loss and suffering—or of adventures and delight—that Karis did. You may not have been born with a rare disability, or have grown up in a different country, or speak five languages, or be one of the first in the world to undergo two intestinal transplants. But you can let Karis create a pathway for you to God’s throne of abundant grace. He’s waiting for you there.

The fourth of eight children of missionaries to a remote village of Guatemala, Debra Kornfield faced profound “city shock” when she moved with her husband David and four small children to the megalopolis of São Paulo, Brazil in 1990. This was her home for fourteen years until she moved to Pittsburgh in 2004 to support their daughter Karis through intestinal transplant, never dreaming that over the next fourteen years, Pittsburgh would become home.
Debra is a nurse with a graduate degree in family counseling. She published three books in Brazil, one of them a groundbreaking book on care for survivors of childhood sexual abuse. She loves hiking, playing with her grandson, cultivating Karis’s Friendship Garden, teaching Scripture and counseling in three languages, writing, and traveling with Dave to the ten Latin American countries where they now work. She enjoys writing for and reading the stories people send for her blog, https://ButGod.blog, and is delighted that biweekly chats keep her in touch with her seven siblings.
Debra met her husband Dave as a freshman at Wheaton College, where she earned a B.A. in English Literature. Dave helped put her through Rush University, where she received her B.S. in Nursing the same month he was awarded his Ph.D. from the University of Chicago. In 1988, two weeks before their fourth child was born, David and Debra joined One Challenge International. They live in Pittsburgh, but travel frequently to Latin America and West Africa for their mission work with OCI.