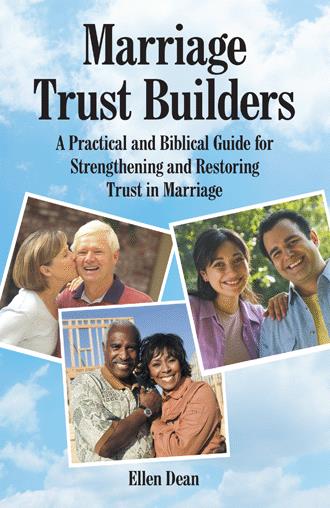 “But it is you, my companion, my close friend with whom I once enjoyed sweet fellowship”

You never thought anything like this could ever happen to you. You married for life. This was not what you planned or ever anticipated. Seems like your world is turned upside down. The trust has been broken and the commitment completely disrupted in your marriage. Things have been shaken to the core.

There are many scenarios in which a marriage can enter an emergency time that causes a trust crisis in the marriage. It may result from financial actions, irresponsibility, impulsivity, sexual sins, unfaithfulness or many other reasons. These imaginary examples may sound familiar and close to home. Perhaps these sound like your story or that of someone you know and care about.

Fred called for the appointment, and asked Laura to come too. He tried several times before she finally agreed. Fred was somber and close to tears, Laura was fidgety and looked uncomfortable. The week before, Fred had learned that Laura had been having an affair with a neighbor. The man’s wife had called Fred and told him about it.

Fred is the quiet type and Laura is outgoing and talkative. She enjoys lots of affirmation and activity. Laura is very pretty and clearly uses her beauty to get the attention she expects. In the last few months, she has been argumentative when Fred asks her about her schedule or whereabouts. She explains that she is not as much of a homebody as he is.

James and Heather were high school sweethearts and married right out of college. Recently, James took an out of town trip with his work. While he was away, Heather cleaned out the garage and their cars. Behind James’ workbench she found some magazines and realized they were pornography magazines. When she looked in his car trunk, she saw some others stuffed part way under the carpet.

Heather called James and told him what she had found. James told her she was crazy and he totally denied the magazines. He later changed his answer and told her that he was storing them for a friend at work. When he came home, Heather asked him to go to counseling. He agreed only when Heather threatened to leave and take the children away if he would not go to counseling with her.

Mark and Lindsey disagree and argue. Mark has been asking Lindsey why her conversations with him include inconsistencies and rationalizations. Lindsey is frequently caught in lies. When confronted about it, she tenaciously defends her stories. Whenever Mark and Lindsey make an agreement, Lindsey does the opposite of what they agreed. Later she denies any previous agreement.

Lindsey embellishes stories and says things to family and friends that Mark knows aren’t true. Mark frequently questions Lindsey’s facts and explanations. Mark hears from other people things Lindsey says that he knows to be untrue. He is confused and frustrated by the lack of integrity in her speech and relationships.

When you read these examples, did it feel familiar, remind you of someone you know, break your heart for someone you love, or bring to light something hidden from past experiences? In these stories, did you see yourself, a friend, a family member or perhaps someone else you have heard about?

The names and scenarios of all the couples and persons mentioned in this book are fictitious. The stories are composites of common generic circumstances. Though all these couples can be of different ages, in different stages, in different ethnic groups, and in different socio-economic categories; they have one very significant similarity.

The common denominator is that the trust is weak or has been broken in their marriage. Now, their marriage is hurting and struggling. They need to know what to do next. The emotions that are experienced when these types of situations occur are varied and usually extremely intense. The actions and decisions that the husband and wife make can greatly impact what happens to their marriage for a long time.

When trust is broken in a marriage, there are always issues, circumstances or events that happen to cause the broken trust. Sometimes it is the result of several events or actions. Sometimes it is a pattern of disintegrating values and convictions. There are always emotional reactions that need to be measured and considerations that need to be discussed.

Usually the characteristics of the scenarios repeat similarly in different stories. It feels like a déjà vu with an eerie sensation of having been here many times before. Predictable precursors have compounded over time in these couples lives, and it will require time and effort to sort things out and reach the best solutions and outcomes.

There are important goals and objectives and these need careful and prayerful attention. In every situation, there are layers to the problems. The sins and needs are greater than one person or any human can solve alone. They are all complicated and sticky.

Though each couple is different and circumstances are unique, the emotions are probably very similar. When broken trust shatters a marriage, regardless of the precipitating factors the intense emotions are hard to adequately describe. They range from shock, deep hurt, disbelief, discouragement, anger, fear, guilt, confusion, betrayal, rejection, despair, disgust and even panic.

The grief from broken trust in a marriage is one of the deepest hurts anyone can experience.

Emotions are described as “a knife in my heart”, “like being on a ship tossed at sea”, “feeling like crying for days”, “having the wind knocked out of me”, and “I’m the last to know”. A spouse may already feel “battle worn’’, overwhelmed and emotionally weary by the time the facts begin to come out. You need comfort, guidance, hope and help. What should you do? Where do you turn?

Almost everyone knows someone who has been impacted by broken trust in marriage. Perhaps it is you, a family member, a friend, or someone you are trying to help and guide. Marriage Trust Builders is about strengthening and restoring the trust in marriage. It is written to help the couples that are struggling because of weak trust in their marriages. It is also written to help marriages that have experienced broken trust. It provides guidance for the spouse who is hurting, the one who caused the pain, and also for those who are walking alongside to help.

Ellen Dean M.S., LPC-S, LMFT-S, CBC is a Licensed Professional Counselor and Supervisor, a Licensed Marriage and Family Therapist and Supervisor. She has four Biblical Counseling Certifications. Ellen has a Private Counseling Practice in Richardson, TX. Biblical Counseling and Ministries (www.bcandm.org). Ellen works with many couples regarding trust issues in their marriage. She has seen a majority of these marriages strengthened and restored because of the power of Biblical truth and God’s grace applied in their marriages.

As someone who has served as a Licensed Professional Counselor for over 15 years, I am elated to see the publication of Ellen Dean’s Marriage Trust Builders. Our discipline desperately needs a robust, wise, and biblical resource to help guide couples through the often arduous, confusing, and complex issue of marital restoration when the covenant of marriage has been violated by infidelity, and this book unquestionably meets that need. The thoughtful process she outlines in this book is truly a gift to counselors, pastors, and the couples they serve!