Creation and the Big Bang

How God Created Matter from Nothing 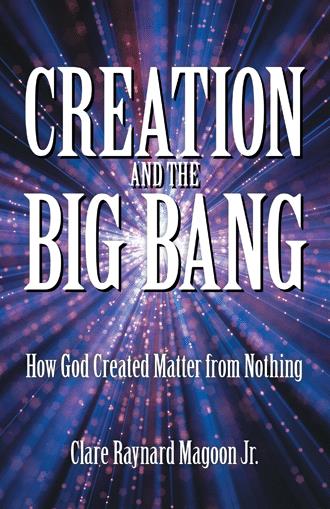 This book explains in great detail how scientists found proof of the creation of matter from nothing, confirming the opening verse of the Bible Genesis 1:1, in which it is stated "In the beginning God created the Heavens and the Earth".

Although the so-called big bang theory has been proven and is accepted by over 99 percent of scientists, many of us no doubt still wonder about the beginning of the universe and how something came from nothing. We may know how it began, but what caused the big bang? And more importantly, how do we fit into the broader picture?
In Creation and the Big Bang, author Clare Raynard Magoon Jr. explores the big bang and helps explain the answers to some of these big questions about our origin and our purpose. The big bang, he argues, proves the creation of matter from nothing, which in fact confirms the opening verse of the Bible, Genesis 1:1, which states, “In the beginning God created the heavens and the earth.” It also looks at new scientific discoveries and the founding scientists who studied our origins, showing how greats like Sir Francis Bacon, Isaac Newton, Max Planck, and Albert Einstein were all believers and sought after a creator behind the majesty of the cosmos.
It is reassuring to know that there is a creator of the universe. It is even more satisfying to know that the creator, God, is a personable being who cares about us and watches over us, keeping the conditions in the universe, and particularly our planet Earth, fine-tuned at all times to accommodate our existence. With both facts and faith, we can enjoy this knowledge and this reassurance as we reflect on the fingerprints of God in his creation.

Clare Raynard Magoon Jr. was born in Rockford and raised in Cedar Springs, Michigan. After attending the Moody Bible Institute for one semester, he joined the US Army, making it his career. Magoon was on active duty as a soldier for six years and then served as a civilian, working as an engineer and executive for an additional twenty-nine years. Traveling the world, he was able to observe a variety of cultures and religious practices throughout Europe, Asia, and North Africa, and Creation and the Big Bang draws on these experiences.