Take Control of Your Life 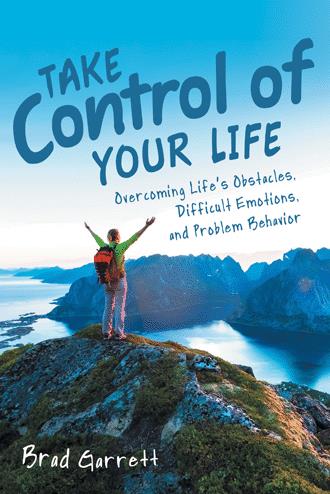 EMOTIONS DO NOT AUTOMATICALLY SHUT OFF

“I don't want to be at the mercy of my emotions.

I want to use them, to enjoy them, and to dominate them.”

I believe that many people have never thought about having the ability to turn off their emotions at will. I base this on my own personal experience first, and then others I have talked to. If you believe there is nothing you can do to control a negative emotional reaction, then you will be stuck with what you feel for a longer period of time than you need to, and long after the event that caused the emotion has passed.

You have learned that the acute stress response does not shut off automatically in the same way that fight-or-flight does. Emotions can linger long after what created them is over. Maybe you can think of someone who was still angry about something days after it happened. Maybe it was you.

Let me illustrate how you can allow an emotion to continue for a longer period of time because you allow it to. I have had vertigo (BPPV) in the past, and I had it again recently. For those of you who are unaware of what vertigo is I offer a simplistic explanation. It is an imbalance in the inner ear created by the dislodging of crystals in the ear. This creates various symptoms such as dizziness and a feeling of nausea.

As a result of the BPPV, I felt an intense urge to throw up every time my head moved. There is no medication that can correct the imbalance in the ear; it usually clears up in a few days on its own. But they could not give me the medication fast enough to relieve the nausea.

I would have been foolish to tell the doctor no thanks, I think I will just suffer with the nausea. In a similar way, is a person acting foolish when they allow the negative energy of an emotional reaction to continue for a longer period of time than needed? It is something you might want to seriously consider.

Type of or Degree of Emotion

The first reason emotions stay turned on longer than they need to is based on the initial reaction to what occurred. Emotional energy varies based on the type of emotion we experience.

If we compare two different emotions such as being irritated to feeling angry, which emotion do you think would result in a higher level of negative energy? Irritation, along with being annoyed or frustrated, are considered to be on the low end of the anger scale, while irate and rage are on the high end. Anger will register at a greater level of intensity than irritation, but lower than rage.

Secondly, the emotional energy of an emotion can vary by degrees. A question we often ask people in counseling to determine the strength of an emotion goes; on a scale of 1 to 10, with a 1 being no reaction, and a 10 being a volcano ready to explode, what number is your anger? The higher the number, the stronger they are feeling the emotion.

The type of emotion you feel, and the level of intensity that comes with an emotion translates into longer periods of time being necessary to calm down to a pre-emotional state. Pre-emotional state means how you felt before you experienced the emotion.

A person can also change the type of emotion they initially feel. To do this, you need to ask yourself if it is necessary for you to feel this way. You can become so used to getting angry over everything, that you by-pass all the lesser emotions such as being irritated, annoyed, or frustrated and head straight to a level nine anger . These emotions are less intense than anger, easier to control, and quicker to get over. Ask yourself if you really need to be angry every time you react; can you just be annoyed or irritated instead?

The same is true for stress. I know that this is an exaggeration at some level, but we react in a similar way emotionally to a big problem as we do to a little one, to a small irritation as we do to a big one. Not all problems are created equal. Some really are much smaller in size. Quit reacting to situations as if they are the end of the world. It is not, and all crisis are not equal! Learning to change the type of emotion you initially feel, combined with lowering the level of intensity of the emotion you feel, are great starting steps in learning how to control emotions.

Nobody gets through life without feeling stress. The question is, What do you do when you feel it? How do you deal with anger, anxiety, depression, and a host of other negative emotions?

Do your emotions lead to bad behavior? Is bad behavior leading to some negative consequences in your life?

Take Control draws on twenty-three years of experience working with adolescents and adults whose lives had become involved in criminal behavior and drug addiction, and who had developed mental health issues and emotional problems. This book will show you how to take back control of your life by learning how to overcome difficult emotions (including stress), replace problem behavior with new behavior, overcome addictions, and change your negative thinking. Problems are only problems needing to be solved. How you think about those problems determines how you will feel.

Take Control teaches you how to take control over these areas of your life. In addition to the psychological principles behind emotions and behavior change, there are several chapters dedicated to what the Bible has to say about emotions, thinking, and making changes in problem behavior.

The book began as a Manage Your Emotions—Manage Your Life presentation done for 250 juvenile probation officers in Las Vegas, Nevada. The class was well received and had a positive impact in the lives of many people who attended the classes. I hope this book does the same for you.

Brad Garrett was born and raised in Las Vegas, Nevada. He graduated from UNLV with a BA and MA in psychology. He was licensed as a marriage and family therapist in 1994.

Brad worked for twenty-three years as a marriage and family therapist in the Department of Juvenile Justice Services, Las Vegas, Nevada. Job responsibilities included providing individual and family counseling to probation youth and their families, as well as teaching anger- and stress-management groups and correct-thinking classes. He spent two years as a clinical supervisor of a court-ordered domestic-violence program during this time.

He is the former cofounder and copastor of a Calvary Chapel in northwest Las Vegas. He holds a BA in ministry.

Since retiring from DJJS, he has begun a new career as a speaker, consultant, and life coach. He is in the process of writing a second book to be completed in the fall of 2018.