Immanuel Labor—God’s Presence in Our Profession

A Biblical, Theological, and Practical Approach to the Doctrine of Work 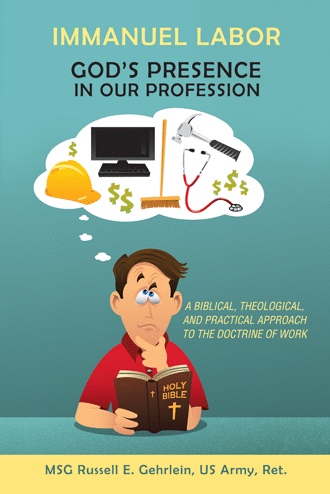 Now that I have laid a solid biblical foundation for how we should view work, I want to show the biblical basis for this major aspect of the doctrine of work that I call Immanuel labor.

As I was preparing my presentation on this subject two years ago, without looking too hard, I could not help but notice a repeated connection in scripture between God’s presence and our work. I do not think it’s a coincidence. I believe work was designed to be that way. This concept of Immanuel labor is indeed a biblical one. God’s presence in the midst of our human labors is well-grounded in God’s Word in a vast number of places.

Let me highlight several connections to defend my theme. Later I will share some ideas on consistently practicing God’s presence. I will close with how I experience God’s presence in government work. In the next chapter, I will support this idea with some other examples.

God’s Presence Is Connected to Work

As you read these examples, I do not want you to see them as special cases where God dealt with His superstars in one way but deals with you and me differently. The purpose of narrative is to reveal truths about God’s character. By seeing how God dealt with these people back then, we can know that He will deal with His people now in a similar manner because He never changes. Thus, I can conclude that the promise and reality of God’s presence as these men and women did His work also applies to us as we do the work He has called each of us to do.

Here are several examples from the OT:

Adam and Eve—God made men and women in His image. He calls them both to be His coworkers over creation, to care for and cultivate it (Genesis 1:26–28; 2:15).

Moses—He asked God, “Who am I that I should go?” God replied, “I will be with you.” God’s presence was more important than Moses’s qualifications (Exodus 3:10–12).

Tabernacle—The detailed construction of the tabernacle would require a variety of skilled craftsmen. Their work would enable the priests to serve as Yahweh required so that He would dwell among them (Exodus 25:8–31:11).

Solomon—David told him that God would be with him as he built the temple. This would be the place of God’s presence for the nation of Israel (1 Chronicles 22:15–16; 28:20).

Rebuilding the Temple—Yahweh told the leaders to be strong and to work, for He was with them (Haggai 2:4).

I will not discuss further all who are listed here, but let me address a few of them.

I mentioned Joseph above. Several times in Genesis 39, it says, “God was with him.” God’s presence was clearly with Joseph while he worked for Potiphar. (The incident of sexual harassment from Mrs. Potiphar is not the main theme here. God’s presence is.) Later while he was in jail, it states once again that God was with him and He blessed him at work. God blessed not only Joseph but also the bosses that Joseph worked for. God’s presence with Joseph in Egypt enabled him to do some amazing work that protected and provided for the Israelites.

Moses is next. I love this vignette. He asked God, “Who am I that I should go?” But God did not answer his question! (Because He is God, He can do that.) He said, “I will be with you.” He did not say, “Don’t worry. You’ll be able to do it. I believe in you.” That is what we would have said. The implication is clear to me. God meant, “My presence is enough for you. You will be able to perform the great work I have called you to do only because I am with you to do it.”

Solomon is also worth mentioning. In 1 Chronicles 28:20, David told Solomon, “Be strong and courageous, and do the work.” What was going to keep Solomon focused and encouraged along the way? David said the Lord God would be with him as he built the temple. It had to be built a certain way. They would need supernatural wisdom to do it.

Skip to the book of Haggai. As the temple was being rebuilt, Yahweh told the leaders to be strong and work, for He was with them. Work and presence once again appear in the same verse.

There are several examples of God’s presence and our work in the NT:

Mary—Clearly, God the Father was present with her during the virgin conception, during her labor to deliver the deliverer named Immanuel, and as she daily took care of God’s Son, Jesus, as his dedicated and loving mother (Luke 1:35).

Jesus—After the Lord’s Supper, the disciples discussed who was the greatest among them. Jesus said that He was among them as one who serves (Luke 22:27).

Jesus’s Disciples—Jesus sent His disciples to preach the gospel and expand His kingdom. He empowered them by giving the Holy Spirit to provide His presence with them in their work (Mark 16:20; John 20:21–22; Acts 1:8).

The Great Commission—Jesus said to go and make disciples, and that He would be with them always. His presence would enable them to do this difficult task (Matthew 28:18–20).

The Church—Every follower of Jesus Christ is a temple of the Holy Spirit. We are all “walking tabernacles” of God’s presence wherever we go, including the workplace (1 Corinthians 6:19).

Paul—Paul recognized that he is what he is because of the grace of God. He worked hard as an apostle, but it was God’s grace that was with him while he worked (1 Corinthians 15:10).

Here is a fresh, comprehensive, Christian perspective on work. This is a solid introduction to this critical subject. It is especially geared toward those in need of God’s guidance on finding the right career and how to integrate their faith with the job. It is well-grounded in scripture, contains numerous inspirational quotes from other Christian leaders, offers practical wisdom, and includes many personal illustrations. Topics consist of the value of everyday work, thorns and thistles, the eternal value of work, finding a job that fits, how we are to work, and implications for those in ministry. It includes a helpful index of three hundred scripture references and questions for group discussion or personal reflection. This book will expand your view of how God can use your unique abilities in the workplace and how his presence at work makes all the difference.

Russell E. Gehrlein is the author of "Immanuel Labor - God's Presence in our Profession: A Biblical, Theological, and Practical Approach to the Doctrine of Work". He is a Christian, husband, father, and grandfather. He currently lives in Rolla, Missouri, with his college sweetheart and wife of thirty-eight years. Russ received a BS in mathematics from Colorado State University in 1980 and an MA in biblical studies from Cornerstone University/Grand Rapids Theological Seminary in 2015. Russ is a former youth pastor and a junior/high school math and science teacher. In 2006, he retired from active duty with over 20 years of active duty as a Master Sergeant. He currently works as a Department of the Army civilian at the US Army Chemical, Biological, Radiological, and Nuclear School in Fort Leonard Wood, Missouri. Although this is his first book, he has been a published author for many years. Russ has written more than a dozen articles that have been published in the NCO Journal, Campus Life magazine, Army Chemical Review, and for the Center for Army Lessons Learned. He has also had 21 articles posted on blogs from four faith at work organizations. In his spare time, Russ enjoys hanging out with his wife, watching movies, listening to music, reading, and writing. He takes long walks around the neighborhood, where he likes to count bunnies. He and his wife travel often, mostly to visit their children and grandchildren. He also makes a lot of puns. Russ has posted more than 100 articles on his blog, Reflections on Theological Topics of Interest, at www.regehrlein.wordpress.com.