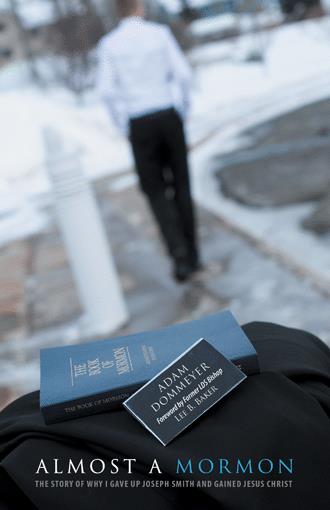 “I am truly awestruck by Adam’s extensive research on LDS topics and his powerful weaving of that information into the narrative fabric of his compelling personal story. But mostly, I was moved by his authentic love of God. Adam is an erudite researcher, a skilled writer, and a bit of a tender soul with a shepherd’s heart for the dear LDS people. His approach to evangelizing is frank, yet kind. We in ministry to Mormons thank God for Adam’s sweet desire to teach Christians about LDS people and doctrine and his desire to share the gospel of grace with Mormons. The reader will truly glean many good ideas about how to talk with Mormons and come away with hope that God is still at His work.”

“I've read lots of books on Mormonism, but never one quite like this. Though I heard long ago that it's easier to inoculate against Mormonism than it is to do a ‘Mormonectomy’, Almost a Mormon effectively employs both research and first-person anecdotes to show what happened to a person who believed LDS doctrine wholeheartedly but was prevented from actually joining their church. This book is articulate, surprising, sometimes even unsettling; and the dream sequences especially will provoke discussion long after the reader has finished the book.”

“As a former member, high priest, and bishop in the Mormon Church for over three decades, I am unfortunately and agonizingly over-qualified to review the literary works of others, specific to the deception and emotional stress of The Church of Jesus Christ of Latter-day Saints. In the case of Almost a Mormon, I have found Mr. Dommeyer’s documentation to be excellent, his compassion to be authentic, and his presentation to be captivating. The compelling story of just how Adam came so dangerously close to becoming a member of one of the most destructive cults in the world is both fascinating and persuasive. I would consider this book to be one of the Top 10 for those who are considering how to either avoid or retrieve someone from Mormonism.”

Former Bishop, The Church of Jesus Christ of Latter-day Saints

“Almost a Mormon will take you on a very intimate journey, filled with spiritual desire and intellectual curiosity. Adam Dommeyer invites us to walk with him to the edge of Mormonism and back. This book is remarkable, for Dommeyer is not angry, but sympathetic—for he truly wanted to be a Mormon. But, as his ample documentation shows, his mind would not allow it. For all its allure, Dommeyer found that Mormonism isn’t true. Instead, he rediscovered Christ, whom he almost abandoned, is Truth. He writes an authentic, painful, piercing testimony. I highly recommend it.”

“While just about everyone will benefit from reading this book, it will be immensely relevant to Christian youth leaders as well as Christian youth. While many church youth groups these days are primarily social clubs, Adam’s story underscores the importance of teaching doctrine and Christian apologetics to our kids, who without such training often become easy prey for the devil. Paul told Timothy to not only watch his life carefully, but his doctrine as well (1 Tim. 4:16). A good Christian education not only teaches the dangers of drugs and fornication; it also warns of the dangers of religious drugs and sirens. Being told from a first-person perspective, Adam’s story is an accessible way to understand these dangers and how to effectively and lovingly communicate with those entrapped by them. There are so many good testimonies of Mormons leaving Mormonism and coming to Christ. However, Adam’s testimony is unique, since he was Almost a Mormon. I’ve heard other accounts from this perspective, but have yet to find them in print and with such vivid detail and raw transparency. He’s a great writer, and his work is well referenced—both of which demonstrate that he is very well read. His story motivates me even more to warn unsuspecting Christians as well as questioning Mormons. I was fascinated reading his whole story and know you will be too!”

Practical Strategies for Getting the Conversation Started (Harvest House)

“As a Mormon convert of five years, now free of the LDS church, I was highly intrigued by Mr. Dommeyer’s story and approach. I clicked a link that took me to Latter-Day Sense Evangelism Ministry. I didn’t read any of the articles, but I did read the biography of Adam Dommeyer. I was impressed with his story, since I had been in his shoes but not backed out. I sent him an email, and a few weeks later, we chatted for a few hours on the phone. I cannot describe how healed I felt when I got off the line. He listened to me rant, tell of my story, doubts, he laughed with me, sympathized with me, and answered any questions I had, right down to what Bible translation would be a good one to get—and where to find one in Utah. Adam Dommeyer became my Good Samaritan. Had it not been for him and his subsequent conversations with me, who knows how things would have gone? What did Latter-Day Sense Evangelism Ministry have in contrast to others? In one word, empathy. Whereas I almost got the vibe that the others couldn’t be bothered with my time, Dommeyer understood where I had come from. He didn’t just yearn to yank another person from The Church of Jesus Christ of Latter-day Saints, he took time to listen to my issues, console me (because, believe me, leaving Mormonism almost has to be treated like the passing of a loved one), and see to it that I would be alright—just as the Samaritan did for the traveler by cleaning his wounds, taking him to an inn, and making sure he’d be taken care of. Just as the Samaritan returned later to check up on the traveler, I would get occasional texts and calls from Adam to see how I was doing. Adam has been a life-saver to me, because living in Utah has meant needing to live in near silence about my situation. Adam has proven himself in this book to be incredibly well-studied (to the point that I, a former missionary, freelance scriptorian, and Temple worker, actually learned a thing or two!). I highly recommend this book for those Christians who would minister to those I left behind, as Adam’s approach is by far the most thoughtful I have seen and experienced. To any Latter-day Saints reading this work, I exhort you to really take this message to heart.”

One family vacation to Utah back in 2002 changed Adam’s entire summer. One Mormon girl in his 9th grade English class altered his path over the following year. One book changed his outlook on faith. One ‘true’ church had him hooked. Suddenly, one unexpected dream from God transformed the course of his entire life. Join Adam on his quest from Mormonism to the one true Faith—Christianity—and you’ll soon realize your own story is about to unfold before your very eyes. You’re about to meet and encounter the One True God!

ADAM THOMAS DOMMEYER answered the call of Christ in June 2003 after he almost joined The Church of Jesus Christ of Latter-day Saints. He is the founder and President of Latter-Day Sense Evangelism Ministry, a Christian para-church outreach to the Mormon community. Adam is a licensed and ordained Evangelist through Speak the Word Church International. As an itinerant minister, Adam has been invited to preach and speak in university and church settings. He is currently pursuing his M.A. in Transformational Leadership at Bethel Seminary (St. Paul, MN). He holds a B.S. in Pastoral Ministry from Lee University (Cleveland, TN) and received his Certificate of Achievement from The Perry Stone Mentoring Institute for Ministry. Adam resides in Minneapolis, Minnesota, with his lovely wife, Hannah, and their two vivacious daughters, Ingrid and Liesel. Visit Adam at latterdaysense.org