Where Is the Evangelical Church? 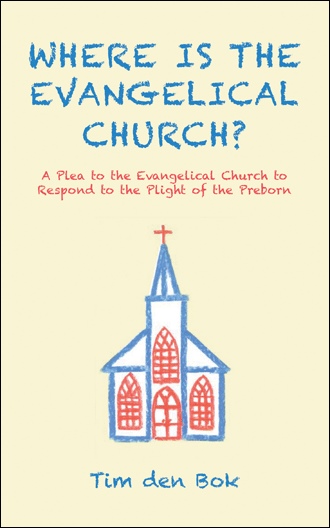 Since 1969, we, in Canada, have brutally put to death almost four million pre-born children.2 Some of these children were poisoned and burned to death with a concentrated salt solution (Saline abortion). Others were suctioned limb by limb from the womb (Suction abortion). Still others were cut up into pieces with a sharp curette (D & C and D & E abortions). The plight of the pre-born is, clearly, an emergency that calls for extraordinary action by the church of Jesus Christ. Yet, despite the fact that the evangelical church of Canada (henceforth simply referred to as the “church”) has known about the monstrous evil of abortion for almost half a century, it continues to treat this issue as if it were one of peripheral importance. I am ashamed that the church has not been “the salt of the earth” that Jesus called it to be, at least with regard to abortion. As such, in this paper I, respectfully, throw down the gauntlet to the church: either refute my contention that the plight of the pre-born is an emergency that calls for extraordinary action by the church, or join with believers like myself in fighting this evil.

This little book is a clarion call to the Evangelical Church of Canada to respond to the plight of the preborn. Drawing upon Scripture, the testimony of contemporary evangelical leaders, and church tradition, the author sets forth a case that the mass shedding of innocent blood, such as is the case with the legalized practice of abortion in Canada, is an emergency that calls for extraordinary action by the Church.

Tim den Bok is the co-founder and co-director of a Voice for the Pre-Born, a Canadian evangelical pro-life organization. He has been studying the abortion controversy for approximately 30 years. Tim works as a support worker with the mentally and physically handicapped. He and his wife, Sara, recently celebrated their silver anniversary. They have two children, Daniel and Leah. Tim is a member of the Nazarene Church of Canada. For more information about a Voice for the Pre-Born, visit: avoiceforthepreborn.com. Tim can be contacted at: tdenbok3victory@gmail.com.