Come as You’re Not

Because God Welcomes You as You Are 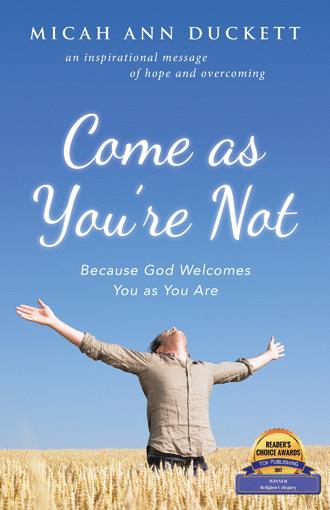 “Is that Derek’s birthday bike?” The mangled, crushed heap held enough of its parts to let me know it was a bicycle, and it drew my attention to the left side of the road in the distance before I slowed in passing to get a better look from my car. A good thing it did because if only I had looked to the right, I would have seen the ambulance and a small group gathered—and probably crashed my vehicle.

It was Saturday, June 2, 1990, Derek’s ninth birthday and our seventeenth wedding anniversary. My husband, Mike, would return later that day from out-of-town business, and we would celebrate Derek’s birthday. Before Mike left, we had given Derek his new bicycle early, and since that day, the street in front of our home had felt the treads of his numerous laps in fine racing style.

Because of last-minute RSVPs, I needed to make a run to the store for more goodie bag items. Derek begged out of the trip and pleaded to stay instead with his good friend in order to ride bikes together. After checking with the mom and getting the okay, I walked Derek with his new bike to the major intersection at Loop 197 North that separated our neighborhood from his friend’s, and I made sure he crossed safely, as was my custom because of the heavy traffic. The boy’s home was only a block or so from the intersection, and soon I was off on my party mission.

I cannot explain how I missed something as large as an ambulance with lights upon my return from the store. I believe God drew my attention to what looked like the twisted frame of Derek’s new birthday bike. It had not been in our possession long, and a part of me held out hope it was not Derek’s bike. The other part of me knew it might be but would not allow me to ask, “Has Derek been hit by a car?” All I could question over and over like a looped statement was, “Is that Derek’s birthday bike?”

Somehow, I managed to pull over into the entrance of our subdivision, and as I stepped out of the car, I noticed Ray, my neighbor and church friend, walking with determined pace toward me, face concentrating on the ground, not making eye contact. “Ray! Ray, is that Derek’s birthday bike?” I called as if Ray knew that Derek had even received a bike for his birthday, much less what it looked like. Still, I could not ask if Derek had been hurt. “Ray, is that Derek’s new birthday bike?”

Ray simply kept walking, hastening his steps, and as he got within arm’s reach, his eyes met mine in answer to my repeated question. “Yes, it’s Derek’s bike.” My legs gave way as I gasped in short, panting breaths, and I collapsed into Ray’s arms. He gently turned me, and suddenly the ambulance and lights loomed before me. “Why hadn’t I seen that?” A small group of people gathered and through the gaps between their legs and feet, I saw a pair of little feet in tennis shoes lying limp to the right and left. “Derek…”

As Ray led me toward the scene, he explained that Derek had grown impatient waiting on my return from the store and asked the friend’s mom if he could ride to the house to check and see if I was home yet. She quizzed, “Does your mother let you cross that intersection alone?” and Derek lied and told her I did. Derek managed to cross safely going home and was on his way back to his friend’s house when the mother heard the crash and her heart sank in dreaded intuition. A twenty-one-year-old young man had struck Derek with his car, which sent the bike under the car to its destruction and Derek lifted up into the windshield and then thrown off, skidding and flopping like a rag doll down the pavement.

We arrived at the group, and as it parted to let me through, I heard whispers, “That’s his mother.” Staring in disbelief, the first thing I noticed was Derek’s platinum-blond hair dampened and resting against his still head; his body unmoving as he lay on his back. His eyes were shut, and he seemed unconscious, which made me wonder if his brain would function normally again. I glanced at gaping, deep slashes in his legs and arms, long slices exposing the flesh that should be hidden from view. I knelt beside the paramedics working on Derek, who lay deathly still without flinching as they assessed him. “Mama’s here, Derek; Mama’s here.” I was shocked when his head slowly turned toward me in recognition, his eyes searching to find my face.

“Oh, my God, your brain is still in there and working fine,” I breathed in relief as I moved from fighting back tears to embracing chuckles and thanking the Lord. “Sweetheart, we have no choice but to give you a few stitches.”

“Well, then, will you tell me how many stitches I get? I want to see if I beat Kyle.” Yes, until that fateful day, brother Kyle held the family record for stitches from a couple of minor childhood accidents. Little did we know, not only would Derek assume the family record, it would take over 300 stitches to put him back together. Amazingly, there were no broken bones or internal injuries.

I’m not sure how fast Mike drove home, but his way was cleared thanks to some calls from the chief of police, a personal family friend. He arrived at the hospital just in time to see Derek before they took him to the operating room. While awaiting an update, I prayed, “God, what in the world will I tell Derek when he comes to? Where were Your angels who were supposed to guard Derek? I know he is going to ask me why this had to happen to him, and quite frankly, God, I need an answer to that myself.”

I sensed God telling me to read Psalm 91. Don’t ask me how I had a Bible in my hands that day. I cannot tell you, but there was my Bible. I began to read,

He who dwells in the shelter of the Most High will abide in the shadow of the Almighty. I will say to the LORD, “My refuge and my fortress, My God, in whom I trust!” For it is He who delivers you from the snare of the trapper and from the deadly pestilence. He will cover you with His pinions, and under His wings you may seek refuge; His faithfulness is a shield and bulwark. You will not be afraid of the terror by night, or of the arrow that flies by day; of the pestilence that stalks in darkness, or of the destruction that lays waste at noon. A thousand may fall at your side and ten thousand at your right hand, but it shall not approach you. You will only look on with your eyes and see the recompense of the wicked. For you have made the LORD, my refuge, even the Most High, your dwelling place. No evil will befall you, nor will any plague come near your tent. For He will give His angels charge concerning you, to guard you in all your ways. They will bear you up in their hands, that you do not strike your foot against a stone. (Psalm 91:1–12 NASB)

I sensed God interrupting me, “Stop. Go back and read verses 11–12: ‘For He will give His angels charge concerning you, to guard you in all your ways. They will bear you up in their hands, that you do not strike your foot against a stone.’ Personalize those verses. Remember what the policeman said at the scene?”

Come as You’re Not is a platform for hope and encouragement. It’s a personal invitation to allow God to speak through these pages to refresh, restore, renew, regain, replenish, reinvigorate, and refuel. Come see what God shows you about his overcoming power and hear his encouragement through all the have, am, and are not examples from Micah Duckett’s life lessons.

Micah’s parents always knew she was different. How many daddies had to spank their children to make them STOP practicing the piano? That passion for expression carried into the written word, and audiences have been inspired by her messages. When she is not writing or using her keyboard talents, Micah serves as a Bible teacher, mentor, public speaker, seminar teacher, and guest worship leader. In her community, Micah served as the first female president of the Texas City Kiwanis Club, received Rotary’s Paul Harris Fellow award, and was recognized by the Galveston Daily News as one of seven Unsung Heroes. Married to banker Mike Duckett for 44 years, Micah’s other loves include three sons, 3 daughters-in-love, and seven grand-blessings.