Wisdom from Sons of Great Fathers 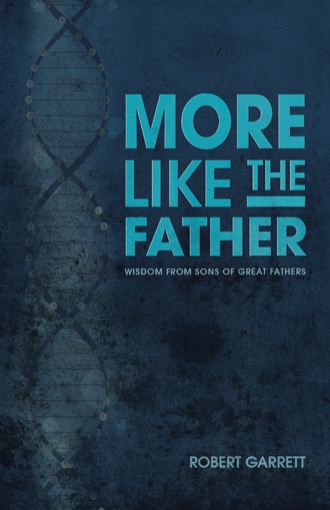 I have a number of heroes in the faith—men and women who are changing the face of the contemporary church across the globe. One such hero is Pastor Paul Scanlon, founder of Abundant Life Church England, who is one of the great teachers and communicators of our generation.

Late in 2007, Paul was in Australia to speak at a Men’s Conference. During that conference, Paul launched his incredibly powerful book I am not my Father.

The book is largely autobiographical as Paul tells the story of his own dysfunctional experience of being fathered, and how he left home at sixteen to get married. By the age of twenty, unhappy with life and married with three young children, Paul had an epiphany moment where he realized that history was repeating itself and he was becoming just like his father.

The book goes on to explain that the forces of generational momentum are so strongly stacked against us that unless we make a conscious effort to make a defiant stand and say, ‘I am not my father’, we are likely to repeat the mistakes of our fathers and their fathers before them.

After introducing his message, Paul asked the five thousand conference delegates: “Who, after considering how you were fathered, would say ‘I am not my father?’ It’s incredible, that whenever I ask that question to groups of men all over the world, the response is always the same—there are never less than sixty percent of men who raise their hands.”

I spoke with Paul and expressed surprise at the number of men who responded to his question. He asked me about my own fathering experience. I said that I was one of the forty percent who did not raise their hand. I went on to explain that my own father and grandfather were two of my greatest heroes; both loved God, loved their wives and have been wonderful role models for me.

After telling my story, Paul commented: “You need to understand that your experience is not normal—what you’ve just described is the exception.”

With a few hours of free time until the evening session of the conference, I found a quiet corner in the courtyard of a small café, ordered a coffee and began to read Paul’s book.

I have never read a book cover to cover in one sitting, but after two hours, I’d finished. I sat back reflecting on what I had just read. I thought to myself, ‘If I grew up with a dysfunctional father and didn’t want history to repeat itself, where would I go to learn what a good father looks like?’

It was then that I recalled something that Paul said in our conversation earlier that afternoon, “Maybe one day someone will write a book from the perspective of the forty percent.”

I believe that God stirred something deep inside me that afternoon. My ‘exceptional’ experience of fathering wasn’t just for me. At least sixty percent of men, who didn’t have a positive role model must be looking for some answers, some guidance on how to ‘do fatherhood’ better. I genuinely sensed that one day I would write a book from the perspective of the minority—the ‘forty percenters’.

Over the years, I’ve met some truly great dads who stood out from the crowd—exceptional men whose sons and daughters have the deepest love and respect for them. I believe that one of the best indicators of a great father is when his son says that, for the most part, he would like to be more like his father. That’s not to say that he wants to become a carbon copy. Even the men with the best fatherhood role models that I’ve spoken to are aware that there are at least a few of their dad’s characteristics they wouldn’t necessarily want to replicate.

In one sense, great dads wouldn’t want their sons to become copies of them. They would want their sons to embrace the positive qualities, behaviours and mindsets, and then build on those as they become the unique person God created them to be. That’s the benefit of creating positive generational momentum. To use a building analogy—as fathers, our ceiling becomes our sons’ floor. They don’t have to start at ‘ground level’—they take the great things they have learned and keep building on that foundation.

But this book is not about the search for the perfect father, because I don’t believe such a person exists this side of heaven. By including the stories of a number of men who have had great dads, we can start to draw a better picture of great fatherhood, based on their collection of experiences.

As I talked to these men, I discovered that great fathers fall into one of two groups. Either they themselves had great fathers and they were simply following their father’s positive example, or they had a poor, dysfunctional father experience and as a conscious act determined that the negative generational momentum stops with them.

The great news is that if you didn’t have the best fatherhood role model, then your past doesn’t have to determine your future. You can choose how your story ends. Having drawn a line in the sand, this book will help you to start taking positive steps towards becoming a great father to your children. My prayer is that the testimonies of these men will inspire you and give you hope that positive generational change is possible.

The other lesson from the lives of these fathers is that their stand-out qualities are actually reflections of the nature of our Heavenly Father. If you are a Christian, that probably won’t surprise you. The first chapter of the Bible records that, “God created mankind in his own image” (Gen.1:27). Just as the law of gravity affects us all whether we understand it or not, the principles in this book will work for all fathers irrespective of their level of faith or belief in God.

Imagine if you could gather a bunch of guys from all walks of life who had a great fathering experience and spend a few hours with them learning about the practical things that their fathers did.

That is exactly what More Like the Father will do for you. It will provide you with wisdom from sons of great fathers and set you on a path to build a great fatherhood legacy of your own.

Robert is the second eldest of seven children. He is committed to continuing the amazing legacy of fatherhood given to him by his father and grandfather. His two great passions are strengthening families and encouraging fathers.

In the corporate world, Robert is a self-employed organisational change consultant.

Within his local church, Robert leads a men’s bible study group and, together with his wife Cath, works with both engaged and married couples to build healthy strong marriages.

Robert, Cath, and their three children live in Sydney, Australia