The View From Down in Poordom 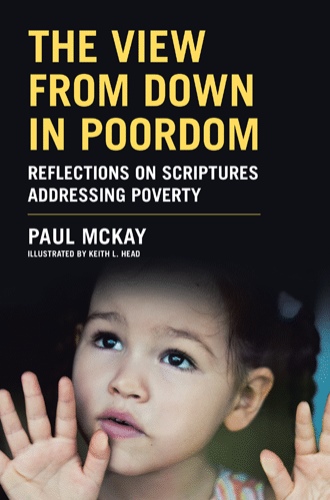 The early Christians that Paul admonished to work for their food weren’t at the mercy of investors who made their livings moving massive amounts of “paper money” around in markets on almost every continent. The government (that is, the Roman dictatorship) wasn’t bailing out banks, mortgage companies, or behemoth corporations to protect the rich and powerful.

The ostensible purpose of Wall Street is to finance the making of real things in a real economy. But at some point, Wall Street embraced economic instruments called derivatives while banks transformed into giant hedge funds that trade on their own accounts. These dubious developments in modern capitalism have been hard on people living in poverty or close to it and have, in fact, thrown many out of the labor pool and into the poverty pool.

And consider our so-called “consumerist culture.” The early Christians weren’t caught up in a consumerist culture gone so wild that, in our age, shoppers literally stampede when giant retail stores open their doors on the very day set aside to give thanks to God for our blessings (Happy Thanksgiving, somebody say grace and pass the gravy!). Nor were the early Christians indebted to the hilt to credit card companies that seduced them with offers of easy money at (temporarily) low interest rates.

What the early Christians in Paul’s time had was each other. They lived and worked and worshiped in direct relation to each other in a spirit of community. There was no room in such a communal society for some to slack off while others put food on the table. (Incidentally—the Thessalonians who weren’t working for their food believed that Jesus was returning in a matter of days or weeks, so many of them must have raised the question, “Why work?”)

As one who considers himself a genuinely “compassionate conservative,” I’m about to share an opinion in italics in order to emphasize where I stand: Yes and a thousand times yes: of course the able-bodied person in our time and in all times should work and pull his own weight in order to eat. And of course: feeding the hungry should not be the responsibility of faceless bureaucrats overseen by politicians who create dependency by taking money from those who have it and giving it to those who don’t.

But tell that to the poor person who works his or her fingers to the nubs only to have the electricity cut off in a heat wave because their paycheck was spread too thin to cover the exceptionally high bill. Tell it to the head of a household working two or three jobs who is down to only a chunk of cheese in the refrigerator with payday still three days off. Or tell it to someone stuck in unemployment or a low-wage job because jobs in his or her field or home turf are few and far between in a capitalist society where economic booms and good times are often followed by busts and hard times.

The argument that a worker who hits on hard times “can always move somewhere else and find another job” is easy enough to say if your job is somehow layoff-proof. In 2015, Walmart—the Big Daddy of American employment—announced that it was raising the minimum wage to $10 an hour. (Try supporting your family on that kind of income for a month.) Within a year of that announcement, Walmart in January 2016 announced the closing of 269 U.S. stores that threw 16,000 American employees out of work. One of those thousands who were laid off was a friend I grew up with in Texas. He had struggled mightily to support himself and his wife—who also worked a low-income job—and his two aging parents before the job loss. They were in no position to pick up and start over away from home.

Many of those shuttered Walmart stores, of course, were in American towns and city neighborhoods where a Walmart job was the best opportunity for any kind of employment. To advise one of those anxious and worried workers who lost a job that he or she should promptly pick up and move would be unrealistic advice at best. Low-income workers living hand-to-mouth can’t save enough money to pull up stakes and move any time and to any place they want. What’s worse is that such advice adds condescending insult to the injury for someone whose heart lies in their lifelong home.

The author and social justice advocate Barbara Ehrenreich wrote a seminal book years ago about the working poor called Nickel and Dimed: On (Not) Getting by in America. It was about her firsthand experience trying to make ends meet as a Walmart checker.

I once heard Ehrenreich say in a lecture that if the stock market has shrunk your assets of $500 million to a mere $250 million, you might have to pass on a third or fourth vacation. “If you’ve just lost an $8 an hour job,” she said, “you’re looking at no home at all.”

Paul the Apostle made a virtue of working and earning in order to eat, but he also lived out the virtue of contentment, a virtue that, along with simple living, we’ll consider in the book’s spiritual poverty section and concluding chapter.

Meanwhile, in the next chapter, let’s consider the cold, hard fact that slackers and those who play the system—including the church and its charitable ministries—do exist.

“In The View From Down in Poordom, Paul McKay challenges the notion that through hard work and effort, anyone can overcome the modern-day challenges of poverty, a view that leads to stereotyping and scapegoating the poor. In sharing poignant stories about poor people he’s known in the U.S. and third-world Belize, and by sharing his passionate opinions in an even-handed, non-threatening way, he offers a scripture-based vision of how we can know God by knowing the poor.”

“Paul McKay reminds us that, if we pay attention to life down in Poordom, we will discover responsibilities we too often evade and truths about the layered experience of poverty that we often studiously ignore. But we will also discover unexpected treasures: the gift of friendship, wisdom that cannot be purchased, and the face of God.”

The Rev. Paul McKay is an ordained United Methodist Church deacon who served as a second-career hospital and hospice chaplain in North Texas. In a journalism career spanning 32 years, Rev. McKay was an award-winning, general-assignments reporter for newspapers including The Houston Chronicle. He was also an associate editor of the now-defunct The United Methodist Reporter. Currently living in Belize, he blogs at www.jitterbuggingforjesus.com