Sit At His Feet: Choose What is Better 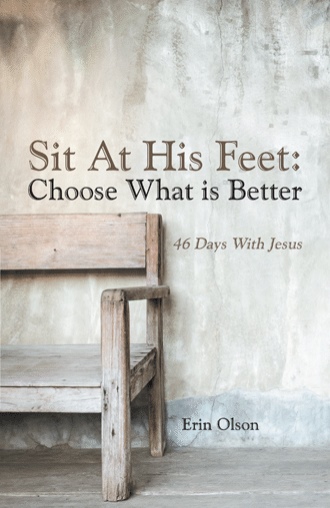 DAY ONE – GRACE IS A GIFT

Why are we able to come to the Father? Grace. Pure grace.

God loved us so much that He sent His only Son to die in our place for our sins so that all who believe in Him will have eternal life (John 3:16). It is a gift from God; no one can earn his or her way into heaven (Ephesians 2:8–9). His Spirit seeks humble and repentant hearts. C.S. Lewis said Lent is “a season of a kind of happiness and wonder that makes you serious.” Let’s be serious about the Savior this season, and let’s start near the end of His story.

But Mary stood weeping outside the tomb, and as she wept she stooped to look into the tomb. And she saw two angels in white, sitting where the body of Jesus had lain, one at the head and one at the feet. They said to her, “Woman, why are you weeping?” She said to them, “They have taken away my Lord, and I do not know where they have laid him.” Having said this, she turned around and saw Jesus standing, but she did not know that it was Jesus. Jesus said to her, “Woman, why are you weeping? Whom are you seeking?” Supposing him to be the gardener, she said to him, “Sir, if you have carried him away, tell me where you have laid him, and I will take him away.” Jesus said to her, “Mary.” She turned and said to him in Aramaic, “Rabboni” (which means Teacher)! Jesus said to her, “Do not cling to me, for I have not yet ascended to the Father; but go to my brothers and say to them, ‘I am ascending to my Father and your Father, to my God and your God.’” Mary Magdalene went and announced to the disciples, “I have seen the Lord—and that he had said these things to her.” (John 20:11–18)

At the tomb, Jesus did not appear to Peter or John. Instead, Jesus first appeared to a woman. This woman was no ordinary woman. She was a woman from whom Jesus had cast out seven demons (Luke 8:2). Not one demon but seven! She was a woman who needed healing, and Jesus healed her. Furthermore, she was a woman, and a woman could not be a witness in court. She had no standing, yet Jesus appeared to her. No person would have intentionally made up this story because people knew Mary Magdalene had no standing to testify.

Mary did not go to the tomb that morning to confirm the resurrection. She took her spices with her fully expecting to see Jesus’ remains. Upon seeing the rolled-away stone, she ran to tell Peter. After Mary had told them, Peter and John both went running to the tomb. Once they saw the linen in the tomb, they did not stay, but they returned home. Mary stayed at the tomb and cried (See John 20:1–2, 10–11).

Peter and John processed the news differently from Mary. They returned home most likely more confused than ever. None of them at this time had been completely able to comprehend what had taken place. When Jesus first appeared to Mary, she did not recognize Him until she heard His voice (John 20:14). After seeing Jesus, He commanded her to go and tell the disciples. Immediately, she left the tomb and took the news to the disciples (John 20:18).

Even upon hearing the news, the disciples did not know what to do. Hours later, they still sat holed up in a room, behind locked doors, fearful of the Jewish leaders. They did not run through the streets shouting, “Jesus is risen! Jesus is risen!” Jesus had to appear to them before they believed. Thomas, the only disciple who had not seen the resurrected Jesus with his own eyes, doubted them. Thomas had to wait eight days before Jesus appeared to him (See John 20:19–20, 24–28).

Jesus told the disciples, “Because you have seen me, you have believed; blessed are those who have not seen and yet have believed" (John 20:29). The disciples did not believe Jesus rose from the dead until they saw Him with their own eyes, touched Him, and spoke with Him. They even had the privilege of seeing Him more than once.

Second Corinthians 5:7 says, “For we live by faith, not by sight.” How greater is the faith of the one who believes without seeing? May doubt be eliminated, may unbelief be covered with His light, may blind eyes be opened, may desperate hearts receive His grace, and may many—including you— choose Him today and always!

He is not here; he has risen! Remember how he told you, while he was still with you in Galilee: “The Son of Man must be delivered over to the hands of sinners, be crucified and on the third day be raised again.” Then they remembered his words. (Luke 24:6–8)

Forty-five days from now, we will not be celebrating Jesus' death; we will be praising His resurrection. Hallelujah!

On that day, many will participate in Easter egg hunts. Young children will hunt for hidden, plastic eggs filled with candy, stickers, small toys, and money. These children will run around squealing with joy each time they find a colorful plastic egg.

You know what is better than a plastic egg? Running around while squealing with joy when we discover the hidden treasures that God has already promised us.

Psalm 31:19 says, “How abundant are the good things that you have stored up for those who fear you, that you bestow in the sight of all, on those who take refuge in you.” The word “stored” in Hebrew is tsaphan. It means “to hide, treasure, store up.” What is it this verse is saying is “stored up” for those who fear Him? It is His goodness—His good things. However, according to this verse, there are two things we must do. First, we must fear God. We must acknowledge Him and put no other gods or idols before Him, the Great I Am. Second, we must take refuge in Him. The word “refuge” in Hebrew is chacah. It means “to seek refuge, flee for protection to put trust in (God), confide or hope in (God).”

Let’s start the Lenten season by running for joy to the Father. He gives us a place to put our trust and our hope. He is calling us to draw closer to Him, so we can find hidden treasure only found in Him. He wants to give you His good things, but you must be willing to show up and participate in the hunt.

Sit at His feet, choose what is better, and see what He wants to reveal to you.

In early 2015, author Erin Olson felt the Spirit calling her to a closer walk with the Lord. As she wrestled with what this meant, she was led to revisit the concept of Lent. Sit at His Feet: Choose What is Better is a result of what Erin was consequently led to write.

Although many churches observe Lent, some have removed this practice altogether, and people have missed out on the opportunity to experience and understand this reverent season. While it is true that followers of Jesus Christ should have a daily, personal relationship with their Savior, certain seasons should cause believers to draw even closer to Him as they prepare to celebrate Him with the world—especially with the unbelieving world.

From reading these daily devotionals interlaced with Scripture and personal stories, Erin hopes the desire to sit at His feet and choose Him increases. Sit at His Feet: Choose What is Better is intended to be a timeless devotional that may be reached for every Lenten season as well as any season the reader may simply need to sit at His feet.

Erin Olson is, first and foremost, unashamedly in love with Jesus. She is also a wife and a mother to three children. Erin founded Sandalfeet Ministries in 2012 as a way to minister to people while raising her young family. She is a blogger, podcaster, Bible study teacher, lay leader in her church, and the author of the Bible study Forgiveness–Unforgiveness: Revealed through Your Fruits.

Erin has a bachelor’s degree in business administration from Regis University in Denver, Colorado and a master’s degree in Christian leadership from Liberty Baptist Theological Seminary in Lynchburg, Virginia.