The Collapse of Darwinism 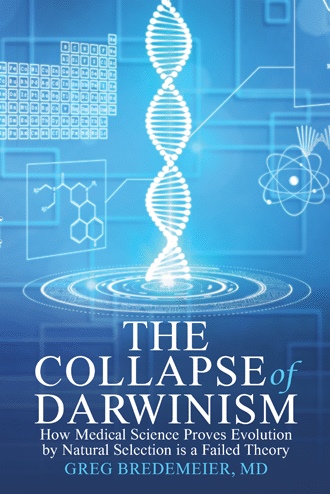 Darwin used the eye as an example of an “organ of extreme perfection.” But he limited his concept of the eye to a mere light-collecting device little different than a telescope and neglected the physiologic concept of vision. But vision is information. The visual system includes light receptors—the eye—visual information processing—the brain and a myriad of structures and processing systems.

I present one component of the complex visual system, and in doing so will discuss, for lack of a better term, one of the creepiest human experiments ever performed. This experiment investigates how head, or eye, movements and environmental movements are related. First imagine that you see your visual field move to the left or right. Two things could have happened: 1) either the environment did in fact move to the left or right or, 2) your eyes moved to the right or left. But, there is another aspect to motion perception. Suppose you are standing out in a field during a very dark night and there is a plane moving from right to left. If you are moving your head from right to left at a relative rate in order to keep the moving plane in the same position on your retina, then everything will appear stationary when actually your eyes are moving and the plane in the distance is moving. So how does your brain deal with all of this conflicting movement to understand how much movement can be attributed to your head, eyes and the environment? One process your brain uses to present a perception of visual reality is called "corollary discharge."

The brain figures this out through a “ . . . close linkage between the motor systems that move our eyes and the sensory systems that process visual information." This process is called "corollary discharge." As Vishton describes, "When your brain sends a command to your eyes, telling them to move from one place to another, it also sends a copy of that command to your visual cortex. This copy of that motor command is referred to as a corollary discharge." Corollary discharge is an important part of visual perception, "By subtracting out the visual motion caused by your eye movements, your visual cortex is then able to figure out what's moving and what's not." Of course, how the visual cortex subtracts out motion caused by eye or head movement has not yet been discovered. However, an experiment was performed that proved the existence and significance of corollary discharge.

This must be the bravest test subject in the history of medical experiments. The test subject agreed to be paralyzed and placed on a ventilator while wide-awake! Only his motor system was paralyzed. He could not move any muscle; he could not breathe and could not move his eyes. He could move nothing. This test was actually designed to determine if the body was in anyway needed to participate in thought and memory. While completely paralyzed, he was shown images, words and math problems. The plan was to allow the paralytic agents to ware off and then ask if he remembered any of the images, words or math problems. As expected the experiment demonstrated that thought and memory are not associated with control of muscle, but something unexpected and profound was discovered.

The subject recalled that as soon as he was paralyzed, the world seemed to jump around wildly and he figured out that this happened every time he tried to move his eyes. Of course nothing was moving. What was happening was that when he tried to move his eyes, a corollary discharge was still being sent to the central nervous system in effect telling the visual cortex that eye movement is coming so expect to see a specific visual field change, but that visual field change never did happen because the muscles controlling eye movement were paralyzed. However, the visual cortex nonetheless processed the corollary discharge and inferred (which is what all perception is—inferential) that the whole world did in fact move in the exact same direction as the eyes. This is truly astonishing because it uncovers extremely complex programming, engineering and neuro-circuitry.

How could one begin to design a system like this? What "numerous, successive, slight modifications" required by Darwin could possibly have led to this state of anatomy and physiology? We are only beginning to understand the tip of this enormously complicated iceberg called vision, yet we are supposed to believe Darwinists when they tell us they know how it was all created. Do other animals have corollary discharge? If so, which ones? How can we figure that out? We have no idea what the prevalence of corollary discharge is in the animal kingdom and no conceivable way to obtain that information. Are there humans who do not possess corollary discharge?

Darwin and Neo-Darwinists ignore far too much anatomy and physiology, and then assume far too much from Darwinism. How many mutations must have occurred to develop corollary discharge? How many neurons, pathways, structures and systems are involved? Are a million years enough time for nature to select this number of mutations? Can a living system survive the number of mutations required to engineer this system through a natural selection process? The questions keep mounting as we learn more and more about the incredible anatomy and physiology of the human body. Simultaneously, the situation worsens for Darwinists as they scramble to invent ways Darwin’s required “numerous, successive, slight modifications” could be responsible for corollary discharge and a myriad of other anatomic and physiologic masterpieces of engineering.

Most people intuitively understand that Darwin’s theory of evolution—natural selection acting upon random mutations—is a wholly inadequate theory for the creation of a human being. And most people feel unprepared to debate those scientists, professors, and scholars who use their academic authority to defend Darwinism, often bullying and belittling those of us who dare doubt Darwin.

Now, Bredemeier identifies and succinctly encapsulates why Darwinism fails. Using anatomy and physiology as only a physician can, Bredemeier exposes the errors and false logic that Darwinian acolytes continue to employ as they protect their mortally wounded theory. Any reader with a high school or college education will become armed with straightforward examples of exactly why Darwinism fails.

From anatomy and physiology of the human body—including neuroscience, genetics, embryology, and other fascinating fields of the increasingly numerous biological sciences—Bredemeier provides indisputable and damning evidence for which academicians, scientists, and even Nobel laureates, who zealously defend Darwinism, have no adequate answer.

Greg Bredemeier is currently a board-certified emergency physician practicing on the Mississippi Gulf Coast with over thirty years of clinical experience. He received a bachelor of science degree from Mississippi State University in 1977, his medical degree from the University of Mississippi Medical Center in 1981, an executive juris doctor with concentration in health law from Concord Law School in 2008, and a doctor of religious studies from Trinity College and Theological Seminary in 2010 with the completion of his major writing project Heisenberg’s Uncertainty Principal and God’s Providential Action. Bredemeier served in the USAF and Mississippi Air National Guard from 1973 to 2010 and retired as a colonel, chief of aerospace medicine, having served three tours in Iraq from 2003 to 2005. Bredemeier has authored two other books, The Philosophical Attack on Christianity (Amazon, 2011) and Judicial Activism and the Assault on Christianity (Amazon, 2012).