Out of the Darkroom, Into the Light

A Story of Faith and Forgiveness after Child Abuse 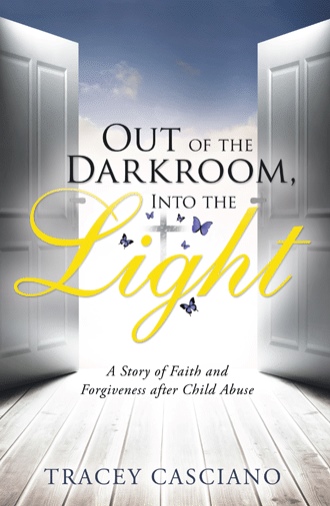 One Sunday morning in the spring of 2013, I sat in church listening to a friend lead the band in worship. So while I am far from a good singer, I did my best to join in. Next to me, my husband sat smiling and singing, and as I scanned the auditorium, I recognized many faces. I felt welcomed and happy to be there as part of this congregation that had become my church family.

When the worship music ended, I sat down and looked at the program laid out for this morning’s service. Before the pastor’s message even started, I’d taken note of the title and could feel my heartbeat quicken. “FORGIVENESS,” it read in large capital letters. As the pastor began speaking, I felt as though a spotlight was on me. Nothing else was in focus. The pastor was talking directly to me. He read out a Scripture passage: “If you forgive those who sin against you, your heavenly Father will forgive you (Matthew 6:14 NLT).”

I started sweating and felt as though I couldn’t breathe. I broke away my gaze from the pastor and looked around to see if anyone was looking at me. Giving my husband a weak smile, I thought to myself, “How could I possibly forgive my parents for all the pain they caused me as a young girl? They don’t deserve it.”

As the pastor’s message continued, I began to fidget and move around in my seat. After years of carrying my burden and hurt from a life with an alcoholic mother and abusive father, I didn’t want to forgive them. I felt that would be letting them off too easily. By the time the service ended, my stomach was in knots. As my husband and I left the church with our four sons and walked to our car, my husband noticed my silence. “Are you okay?” he asked me quietly.

I waited until we had arrived back home and had some privacy before I told him, “I think the pastor was speaking directly to me. I am supposed to forgive my parents. But how? Why?”

My husband could see I was struggling and suggested I go speak to the pastor. My gut reaction was no. I responded, “But then I’d have to tell him everything!”

Though I was panic stricken, I knew I had to ask the pastor how I was supposed to forgive two people who had caused me so much pain. How would I even begin the process after being estranged from my parents for almost sixteen years? So the next day I made an appointment with the pastor. Sitting in his office, I told him about my complicated relationship with my parents. He was easy to talk to, and I shared the physical and emotional pain that my parents had inflicted on me. I told him about the sexual abuse from my father. The years of living with an alcoholic mother. I asked him the questions that had been burning in me for years. “How do I forgive my parents? Do I have to go see them? After all these years how am I going to even start this conversation?”

My pastor was very sympathetic and told me something that immediately made me feel better. He said, “You’re not alone.”

He then explained that if I forgave my parents, that didn’t mean they’d be getting off the hook for their actions. But it would allow me to release my pain and turn it over to God. My pastor suggested I speak with a woman in his office who had a similar past. Telling my story again wasn’t easy, but it was refreshing to talk to someone who had faced similar trauma. So after all the years of keeping everything bottled up, I told my story twice in one day.

After I came up for air, the woman gave me a hug and thanked me for sharing. While I wiped my tears, she told me about her own parents. Though our stories are not exactly the same, we had both ended up being hurt by the people who were supposed to love us the most. I asked her what I should do. We both agreed that going to see my parents was not a good idea. I wasn’t comfortable talking with them over the phone, so I decided to write my dad a letter.

I felt better as I left my familiar church on that sunny day with a plan to finally forgive my parents. Even though it sounded easy enough, I must have started, stopped, and reworded my letter thirty times. In the letter, I explained that my dad and my mom didn’t deserve my forgiveness, but that I was tired of suffering from their actions. I emphasized that I didn’t expect anything to change between us. I referenced the Bible and made it clear that the real reason I was choosing to forgive them was because I needed to put my past behind me.

I put the letter in the mailbox and didn’t sleep for two days. My mind raced. Did I put a stamp on it? What if it gets lost in the mail and my dad never gets it? Will he call me? Are we finally going to talk about everything?

Once I recognized it was not up to me, but up to my dad to respond, a sense of peace hit me. The woman who had encouraged me to write the letter called to see how I was doing. “I am free,” I responded.

I felt that the burden of my past was finally released. As days and weeks passed by, I never received a response from my letter to my dad. I am amazed by God’s knowledge that I needed to surrender to the message of forgiveness at that time, as just six months later my father died. I am humbled by my own obedience and am confident to this day that I made the right choice by sending the letter. I can’t imagine the potential affects that I could’ve experienced from carrying unforgiveness any longer.

Imagine being a young child trapped in a seemingly hopeless situation with a sexually abusive father and alcoholic mother—with no one to tell and no place to go. This true story is a testimony of God’s grace. As she shares her story, Tracey Casciano provides encouragement and inspiration to readers with real examples of faith, reinforced by scripture. Her hope is that this book will touch the heart of anyone who has felt lost or without hope and confirm the need to trust God.

Tracey Casciano has a background in education and was a history teacher for eight years in a public high school, where she was also the sponsor for the Fellowship of Christian Athletes. At her church, Tracey is the executive assistant to the pastor and volunteers as a leader for the youth group. She has been on two mission trips to Guatemala. She lives in Virginia with her husband and four sons.