Set your fields on fire. 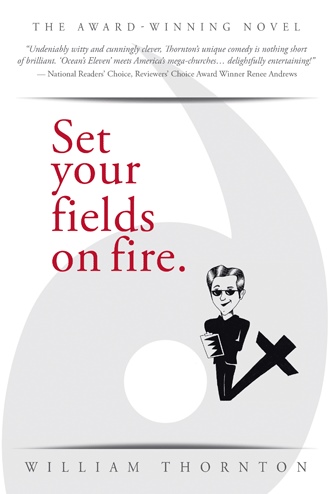 In just four busy years, Alex Alterman's name has become legend among the mystery worshipper industry, which is larger now than when he started. He left New York after he passed his fiftieth birthday and realized early on, so the stories say, that he had missed his life's work all this time. So his new career began in the early part of 2009 when he hired himself out to an Ohio would-be megachurch that noticed its membership rolls were not increasing at the same rate as the population in the suburb that was its home.

Alterman prepared a 96-page report that practically sang. Even the footnotes. He looked at the young families moving into the area, visiting their soccer camps and wandering through the grocery aisles, quizzing the young mothers and fathers who had just moved into the fresh subdivisions. Alterman figured out the youngsters weren't as interested in new statements of faith as they were in building stronger families in a more traditional worship setting. Therefore, it was time to turn back the clock. His report flew in the face of four decades of reliable church growth mantras. He recommended the church scrap their contemporary service's praise music and go with old school hymns. He told them that instead of baptizing new converts in the expensive fount behind the pulpit, on warmer days they might stage them in a pond just across the road.

Not all his ideas were retro. He told the church to get rid of the old marquee it had out front, repaint the trim on the building, and revamp their website. But every once in a while, read from the King James in services, he said. If your music minister's position should come open, hire an older guy in his sixties who exudes a grandfatherly image. Within months, the church was growing at twice the rate of the population moving into the area. Observers were astonished. It proved, said some, the old adage that the Lord knows how to grow the church but He doesn’t always let those who lead it in on the secret.

Right after this auspicious beginning, Alterman snatched up Steve Templeton, newly divorced from his old church and in need of a job. A few wags sniffed that if Templeton was such an expert, he would be leading a church instead of telling others how things should be done. Alterman heard this criticism and gave Templeton a raise on the spot.

Over two years, they have assembled a crew of manically loyal assistants to tackle the churches of America and preach the gospel of clean toilets and trimmed lawns. The bunch of them with their checklists and tape measures and exacting eyes are as remorseless as a cloistered cell of Russian revolutionaries.

There is Bobby Ingersoll, the seminary dropout who came on board shortly after Templeton. He's the one who occasionally poses as an atheist to test the resolve of some Sunday School teachers. He is so convincing, Alterman says, that he insists Ingersoll make professions of faith at each church he audits in order to ensure his salvation.

Not long after Bobby was hired, Templeton recommended Cherie LeFevere, a single woman with three degrees, none of them theological. She has a talent for disguising herself, or so go the stories. She has been a grandmother in a wheelchair once to test a church's handicapped accommodations.

Whitlow Mountain, or Whit for short, is older than all of them, and a retired pastor. Alterman hired him to give the firm a little more credibility in the face of its rather spectacular publicity. That didn't keep Whit from jamming the radio frequency of listening devices for the hearing impaired at one church to see how long it would take the staff to sniff out the problem.

The stories are repeated endlessly in the industry and to the ends of the Christian world. Alterman once lived as a homeless man for two weeks to test whether a church's outreach program was delivering adequate care in winter. He was later treated for frostbite, word had it, but was sent home after doctors determined he was always that cold.

Templeton joined a church and impersonated an out-of-tune choir member until the music director took him gently aside to ask if he could perhaps play an instrument. The same music director got a raise after Templeton rendered his verdict in the church's report, and Templeton in the process learned how to play the piccolo.

There is an apocryphal story that Alterman and Templeton once infiltrated a church's marriage counseling ministry as husband and wife with one of them in drag - the details were vague about which one - to see if the ministry had unrealistic expectations about putting couples back together. Most doubted this story simply because neither man could plausibly pass for a woman. But the tale has enough recognizable truth in it to be endlessly repeated. They have neither confirmed nor denied that they occasionally contract a dwarf to spy on some preschool and nursery ministries.

They sabotage sound systems during services to see if the pastor can be heard in the balcony. They surreptitiously commission senior adult field trips just to confirm if the buses work properly. They bug the teen services to find the young adult worshippers ripping the youth minister in unchurched language when he leaves the room. One operative memorably impersonated a drunk visitor to test not only the quality of the church's security, but its alcohol counseling ministry. They earned the ire of another church when they recommended it start a fitness program after correctly estimating the weight of its deacons. One of them got a concussion during a family roller skating night to thoroughly ascertain if the place had a reliable first aid kit. Alterman himself denies the story that he faked a kitchen fire to see if a particular church's volunteers knew where the extinguishers were.

"I did it because I wanted to see if the sprinkler system worked," he corrects. "Besides, the exits weren't clearly marked. And the fire wasn't faked. But it wasn't that big anyway."

In the process, they make churches dust corners and clean cobwebs in areas where worshippers haven’t gone since bricks and mortar were thrown up. They savage worship centers with fading parking stripes and rickety basketball hoops. They thumb through pew Bibles looking for missing pages and count the used chewing gum accumulating under those pews like stalactites. They count points off for churches that put pithy messages on their marquees without bothering to check the spelling, or the theology.

And as a result of all that manic nitpicking, they have streamlined services and staffs and harnessed spiraling budgets and reintroduced churches to the communities they had supposed they were still catering to. They have broken ancient cliques in churches where young pastors went to watch powerless as their careers died. They have probably prevented more church splits than they inspired. Alterman brags that they have bruised and bullied and inevitably bettered scores of churches of different denominations into remembering Who they serve and what they believe. The legends inevitably collide with reality when Alterman brings his show to a church, but occasionally the people who call him come away thinking the stories go too soft on him. Alterman's answer is typical.

"Jesus is described as carrying His winnowing fork in his hand, cleansing the threshing floor. Does that sound like a pleasant experience?"

Alex Alterman is a “mystery worshipper” – hired by churches to experience their worship services as a member of the congregation and evaluate what works and what doesn’t. Grass growing in the parking lot? Unkempt bathrooms? Bad sound systems? These may turn away people as much as the singing and the sermon. To whom much is given, much is required. But when Alex and his dedicated band of nitpicking zealots are hired to evaluate a Florida church and its prominent pastor, they are presented with a set of mysteries: Who hired them? And who hired their main competition? And why are they being shadowed by a couple of atheists running a dirt-dealing blog?

Oil spills, dwarf spies, choir room surveillance, church league basketball cheats and parking lot security all combine in a splendid caper that stretches from Wall Street to the beachfront. As Alterman’s group finds itself in the eye of the storm, the work takes on a new dimension as they untangle the reasons they believe in their work, and why they believe at all.

William Thornton is an award-winning writer, journalist and a Sunday School teacher. He lives in Alabama with his wife and daughter.