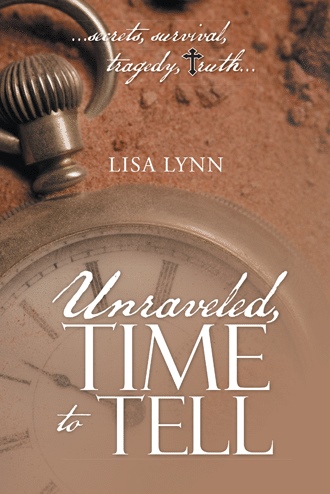 I was nine years old, staying with Daddy’s parents as we always did in the summer. I remember Grandma answering the phone. I heard her say “What?!?” and she came and shut the door to the room I was playing in. As I sat there playing I heard her crying, more like wailing uncontrollably. I cracked the door, there she sat on the phone, stomping her foot and crying in a way I’d never seen anyone cry before. “What is wrong?” I asked. She came and shut the door without saying anything. I was scared. I heard her say about me “I don’t think she heard anything.” What did I not hear? Minutes later she came and loaded me in the car and took me to a neighbor’s where I stayed for hours. This also was never done before. The neighbor lady and her son treated me in such a way, so nice, that I knew something was wrong.

A few hours later Grandma and Grandpa showed up. She’d gone and got him from work. They picked me up and we went to my house. When we got there we stopped at Marla and Ralph’s, my Mom’s parents who lived in front of us on a 3 acre plot of land. There were police and rescue vehicles at my house and so many cars at Marla and Ralph’s. People were everywhere. I was really scared! So scared I started to shake. As we stopped in the drive I saw Daddy and he started crying so I started crying still not knowing what was going on. Daddy took me in to Marla. When she saw me crying she too started to cry and through her sobs repeated, “How much does she know? How much does she know?”…

I was only told Momma had gotten sick and had to go to the hospital. I never saw my brother, Ronnie.

Later, in the middle of the night, I was awakened by the sounds of Aunt Marie, Marla’s sister, coming in. She was such a favorite Aunt of mine that I got up to go see her. Marla escorted me back to bed and then I heard her tell Aunt Marie, “She still doesn’t know.” I remember vividly thinking, WHAT don’t I know? I got back up and went to them and asked in my headstrong way. That’s when Marla took me in her lap and told me “Momma has gone to heaven.” I didn’t really understand but oh the tears from all three of us!

We went to the funeral home a day later after they had Momma ready. I had been to a funeral recently, Uncle Eddie, Marie’s husband, and so I had an idea what was going on. At first Marla told me when I was ready I could go to the front and see Momma. About the second time we were there, Marla was standing at the side of the funeral home talking to Ralph and the funeral director grabbed me by the arm and quickly started to pull me down to the casket. I immediately started to ‘protest,’ but before Marla saw what was happening and got to me, the director had picked me up and placed me over the casket exclaiming, “You need to see her!” And I was exclaiming, “No! I’m not ready!” There she was, my Momma! She didn’t look quite like Momma. I know I was crying, more like screaming through sobs but through my tears I could see something was not right. Momma just didn’t look or seem the same. Marla quickly got me away as fast as she could but it was too late, that impression was fixed in my mind and not with good feelings. Before the funeral when they were getting ready to close the casket for the last time, I went on my own to see her one last time and actually touched and kissed Momma. She was so cold and hard. I guess that’s when it really hit me she wasn’t coming home. I don’t know if I’ve gotten a revelation from God on this experience with the funeral home director but I have on so many other experiences and situations surrounding Momma’s death. And through all this I’ve learned how to witness to others, as Paul instructs us to do so many times in his letters. One reference is Ephesians 4, especially verse 29, “Let no corrupting talk come out of your mouths, but only such as is good for building up, as fits the occasion, that it may give grace to those who hear.” ESV.

As I write this now I think how ironic it was that it was we three; Marla, Aunt Marie and me, that first night since years later it would end up being we three again, alone for a long time, caring for each other. Isn’t that just like our wonderful, Heavenly Father! He’s always putting the pieces together so perfectly and then reveals it to us at just the right time. Thank you God for the revelations!

The apostle Paul wrote letters sharing what he knew, had learned, and had revealed to him from God, knowing this was God’s instruction to him to do so. This book is my letter to you!

Now back to that day. My brother, Ronnie, was immediately looked at as the suspect although I wasn’t to know for months. All I knew was Ronnie was nowhere for me to see. I would ask where he was but to no avail. No one was telling. As the story unfolded of that day’s events, he had alibis along with other facts surrounding the whole situation. This caused further questioning about what really happened that day and was enough for the State Investigator to get involved. More questions than answers surrounded this story for years and are still there just buried and covered with dust, so to say. By the time I was 18, I would become content with this. I came to my own revelation that if God wanted me to know anything differently He would disclose it somehow, someday. Ronnie first was taken to a Mental Hospital and would eventually through a series of events, never from a complete investigation or trial, end up in a Juvenile Delinquent school for boys. It was said he shot Momma in an epileptic fit. There are different forms of epilepsy, I would later research and learn about. But like I said, Ronnie’s activities and alibis that day questioned his possibly being involved at all. 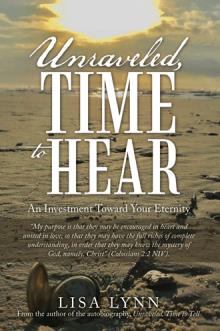 Unraveled, Time to Tell is about a life of secrets turned into heart-opening revelations from God and how a questionable death can change life and leave a young girl vulnerable and unwanted. This change leads to many consequences and puts in front of her choices she was unaware of and ashamed of. This girl lived her married life concealing these secrets, even from her own children. This memoir tells us how her life of abusive, undesired, and unexpected actions could be replaced with joy, peace, and encouragement from God through His Word and His revelations. It includes help from God’s Word that will be an inspiration to anyone who reads it. Her now-grown children heard for the first time her life’s details through this book—her letter to them. Their responses included “wow,” “shocking,” “incredible to have survived,” and “a testimony of God’s redemption.” Other comments included: “A true inspiration, I could have never walked in my mom’s shoes.” “A positive woman that never let the negative get to her.” “It’s a truthful tale of one girl going through life seemingly by herself, striving to survive and revealing those experiences through her own writing of her personal life.” Beginning with Chapter 1, “The Darkest Day,” you will read of her details and decisions, and hear the descriptions of how God revealed each meaning along with Biblical truths throughout. After all the unraveling, all she was shown, she now has to share. Jeremiah 20:9

Lisa Lynn is the mother of three grown children starting their own families. As a child her seemingly perfect life was uprooted by a questionable death, and she was thrown into situations and choices far beyond her nine years. However, later in life, God revealed Himself and His truths about her experiences through His Word. She now shares the encouragement with you.